Business Verizon Reclaims US Wireless Stake for $130B
Business 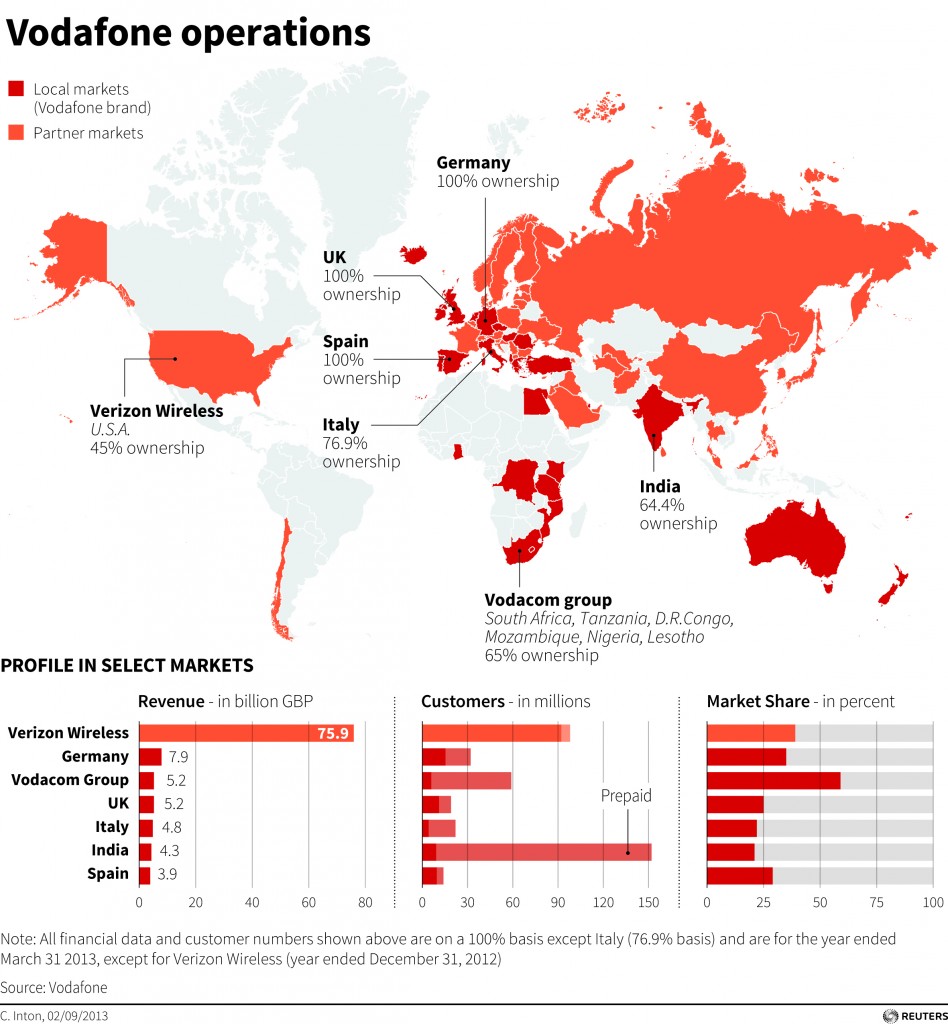 Verizon will own its wireless business outright after agreeing Monday to pay $130 billion for the 45 percent stake in Verizon Wireless owned by British cellphone carrier Vodafone.

The buyout, the second-largest acquisition deal on record, will give Vodafone PLC additional cash to pursue its expansion ambitions in Europe. Those ambitions include its push to buy up other cellphone providers and to expand into the lucrative world of mobile services.

The British company said its shareholders will get $84 billion of the deal’s net proceeds — including all of the Verizon shares included in the deal and $23.9 billion in cash.

Vodafone CEO Vittorio Colao said the sale will mean a “very substantial return to shareholders and to the investments relied upon by savers and pensioners.”

“This transaction has the beauty that it allows both to reward shareholders for their support and strengthen the company for future long-term rewards to shareholders,” he said.

The deal would give Verizon Communications Inc. an opportunity to boost its quarterly earnings, as it would no longer have to share a portion of proceeds from the nation’s No. 1 wireless carrier with Vodafone. It expects its earnings per share will rise by 10 percent once the deal closes. It also boosted its quarterly dividend by almost 3 percent.

The deal still requires approval by regulators and shareholders of both companies. It is expected to close in the first quarter of 2014.

Under terms of the deal, Verizon will pay $58.9 million in cash and $60.2 billion in stock. It will also issue $5 billion in senior notes payable to Vodafone, and sell its 23.1 percent minority stake in Vodafone Omnitel NV to Vodafone for $3.5 billion. The remaining $2.5 billion will be paid in other ways.

It isn’t expected to have much of an effect on Verizon consumers or on the company’s operations. Vodafone had little influence on Verizon Wireless’s day-to-day operations, and the two companies have kept out of each other’s territory.

The Verizon-Vodafone partnership started in 2000, when what was then Bell Atlantic combined its East Coast wireless network with Vodafone’s operations on the West Coast. Vodafone had entered the U.S. market a year earlier by outbidding Bell Atlantic to buy AirTouch Communications Inc. of San Francisco.

While Vodafone and Verizon have prospered by building the infrastructure to make cellphone calls, much of the growth in today’s market is in providing services that can be used on smartphones over high-speed wireless connections, said Victor Basta, managing director at Magister Advisors.

It’s as if the tarmac of the highway has been laid, and the real action is in the billboards on the side of the road.

“While Vodafone has been pursuing its current strategy, operators have become locked in a galactic fight with online brands such as Google, Facebook, and eBay for mindshare,” Basta said. “For these online leaders, winning on the mobile device is not a luxury, it is essential to their own success. The mobile screen is now the main screen in most Western markets.”

The windfall from the buyout will give Vodafone, already one of the world’s largest cellphone companies, substantial funds to buy other providers — or pay down its debt.

“The proceeds from the sale, if not passed on in forms of dividends, could improve Vodafone’s debt position following the recent Cable & Wireless and Kabel Deutschland deals, and provides Vodafone some leeway to further expand its network presence in Europe,” said Ronald Klingebiel, telecommunications specialist at Warwick Business School.

The only question is whether Vodafone has waited too long to move on and pick up companies that do things like provide mobile phone payments, advertising and security, Basta said.

Verizon wanted the profits that Vodaphone got due to its 45 percent stake in Verizon Wireless. And it couldn’t afford to wait too much longer. The sums involved in the deal are so huge, that Verizon feared that fears of pressure on interest rates inspired by a U.S. economic recovery could have made a future purchase more expensive.

Verizon has had a long-standing interest in buying out its partner, but the two companies hadn’t agreed on a price until now. Analysts said Verizon wanted to pay around $100 billion for Vodafone’s stake, while reports suggested that Vodafone was pressing for the $130 billion it is in line to get.

The largest deal on record is Vodafone’s $172 billion acquisition of Mannesmann AG in 2000, according to research firm Dealogic.

The sale will also allow Verizon to expand abroad.

But Verizon faces risks in the purchase, as the U.S. wireless market is also facing growing competition in a saturated market. No. 4 T-Mobile US Inc., for instance, is making a resurgence.

The telecommunications landscape is changing. The wireless business has been lucrative for Verizon Communications, as traditional landline services decline. But the company faces growing competition in a saturated market. No. 4 T-Mobile US Inc., for instance, is making a resurgence after shattering industry conventions, including two-year service contracts.

In the April-to-June quarter, Verizon Wireless added 941,000 devices to its contract-based plans, exceeding analyst estimates and continuing a strong run. It boosted service revenue by 8.3 percent from a year ago. Its closest rival, AT&T, is seeing revenue increases of around 4 percent.

But almost all of Verizon’s gains on the wireless side resulted from customers upgrading to higher-priced plans or adding more devices to their existing plans, rather than an influx of new customers.