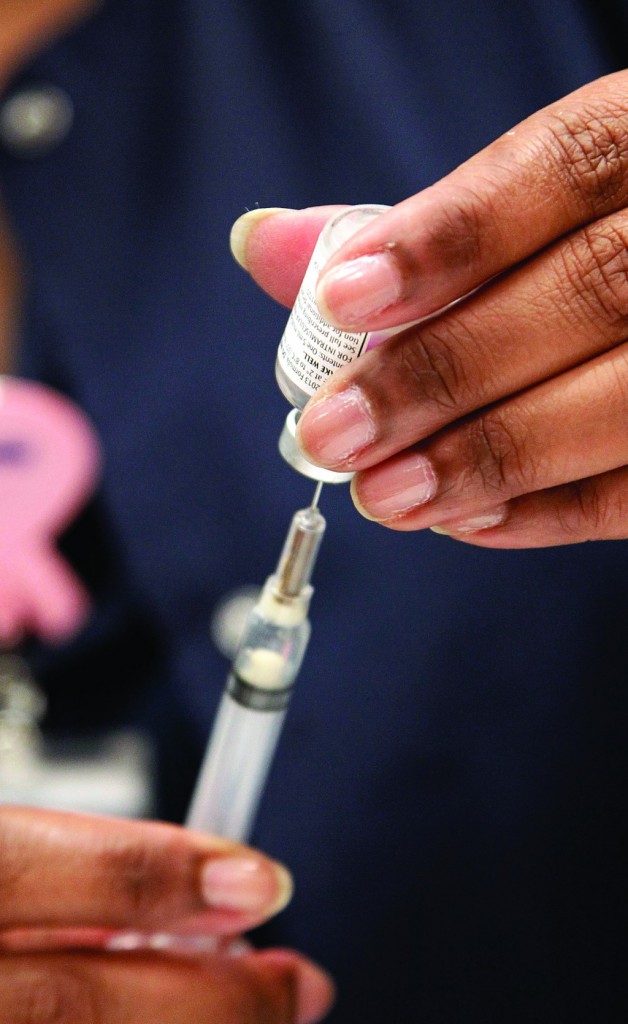 Flu vaccination is no longer merely a choice between a jab in the arm or a squirt in the nose. This fall, some brands promise a little extra protection.

For the first time, certain vaccines will guard against four strains of flu rather than the usual three. Called quadrivalent vaccines, these brands may prove more popular for children than their parents. That’s because kids tend to catch the newly added strain more often.

These four-in-one vaccines are so new that they’ll make up only a fraction of the nation’s supply of flu vaccine, so if you want a dose, better start looking early.

But that’s only one of an unprecedented number of flu vaccine options available this year.

Allergic to eggs? Egg-free shots are hitting the market, too.

Plus there’s growing interest in shots brewed just for the 65-and-older crowd, and a brand that targets the needle-phobic with just a skin-deep prick.

“We’re moving away from the one-size-fits-all to choosing the best possible vaccine for an individual’s age and condition,” said Dr. Gregory Poland, an infectious disease specialist at the Mayo Clinic.

“The flip side of that,” he said, is that “this will be a confusing year” as doctors and consumers alike try to choose.

Federal health officials recommend a yearly flu vaccine for nearly everyone, starting at 6 months of age. On average, about 24,000 Americans die each flu season, according to the Centers for Disease Control and Prevention.

Q: What’s the difference between those new four-strain vaccines and the regular kind?

A: For more than 30 years, the vaccine has offered protection against three influenza strains — two common Type A strains called H1N1 and H3N2, and one strain of Type B. Flu strains continually evolve, and the recipe for each year’s vaccine includes the subtypes of those strains that experts consider most likely to cause illness that winter.

Type A flu causes more serious disease and deaths, especially the H3N2 form that made last year such a difficult flu season. But the milder Type B flu does sicken people every year as well, and can kill. Two distinct Type B families circulate the globe, making it difficult to know which to include in each year’s vaccine. Adding both solves the guesswork, and a CDC model estimates it could prevent as many as 485 deaths a year depending on how much Type B flu is spreading.

Q: How can I tell if I’m getting the four-strain vaccine?

A: All of the nasal spray version sold in the U.S. this year will be this new variety, called FluMist Quadrivalent. The catch is that the nasal vaccine is only for healthy people ages 2 to 49 who aren’t expecting.

If you prefer a flu shot, ask the doctor or pharmacist if the four-strain kind is available. Younger children, older adults, expectant women and people with chronic health conditions all can use flu shots. Four-strain versions are sold under the names Fluzone Quadrivalent, Fluarix Quadrivalent and FluLaval Quadrivalent.

Manufacturers anticipate producing between 135 million and 139 million doses of flu vaccine this year. Only about 30 million doses will offer the four-strain protection.

Q: Who should seek the four-strain vaccine?

A: Type B flu tends to strike children more than the middle-aged, Poland noted. And he said it’s not a bad idea for seniors, who are more vulnerable to influenza in general. But the CDC doesn’t recommend one vaccine variety over another, and the American Academy of Pediatrics said either kind is fine — just get vaccinated.

Q: How are these new vaccines different from the high-dose flu shot for seniors?

A: Fluzone High-Dose protects against the traditional three strains of flu, but it quadruples the standard vaccine dose in an effort to rev up age-weakened immune systems that don’t respond as actively to regular flu shots.

The government calls the high-dose shot an option for seniors, not one that has proven to be better. Last week, Sanofi Pasteur said initial results from a study of 30,000 seniors vaccinated over the past two flu seasons suggest the high-dose shot is about 24 percent more effective. Federal health officials will have to review the full study results to see if they agree.