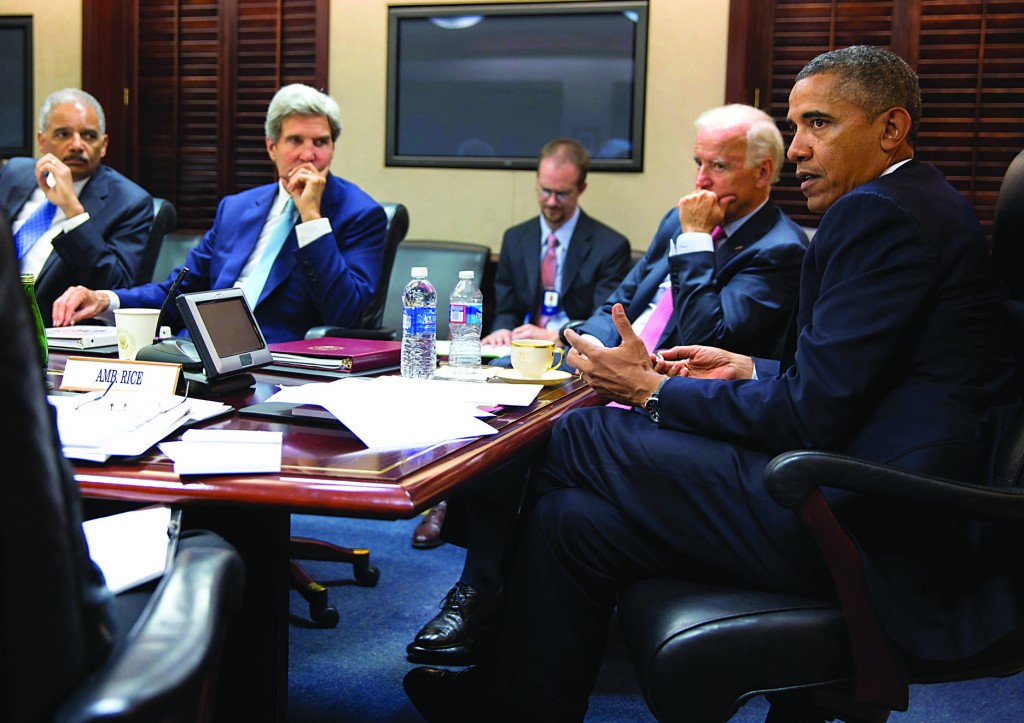 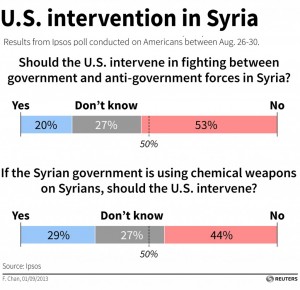 The Obama administration geared up for the biggest foreign policy vote since the Iraq war by arguing Sunday that new physical evidence shows the Syrian government used sarin gas in a deadly August attack. With its credibility on the line, the United States must respond, the country’s top diplomat said.

Members of Congress, deadlocked on just about everything these days and still on summer break, expressed sharply divergent opinions about whether to give President Obama the go-ahead he requested to retaliate with military force against the Assad regime, and what turning down the commander-in-chief could mean for America’s reputation.

Presenting Obama’s case for military action, Secretary of
State John Kerry gave a series of interviews on Sunday news shows outlining the latest information the administration has received about the Aug. 21 attack in the Damascus suburbs that the U.S. says killed 1,429 civilians, including more than 400 children. He said samples collected by first responders added to the growing body of proof that Syria’s government launched a chemical weapons attack.

“Samples of hair and blood have been tested and they have reported positive for signatures of sarin,” Kerry said. “Each day that goes by, this case is even stronger. We know that the regime ordered this attack. We know they prepared for it. We know where the rockets came from. We know where they landed. We know the damage that was done afterwards.”

Sarin, which affects the nervous system and is toxic in liquid or gas form, can be delivered in missiles, bombs, rockets or artillery shells. The gas is outlawed under international rules of warfare. The references to hair and blood samples were the first pieces of specific physiological evidence cited by any member of the administration, which previously spoke only about an unnamed nerve agent.

Kerry’s assertion coincided with the beginning of a forceful administration appeal for congressional support, now that Obama has declared he will await approval from the House and Senate before ordering any cruise missile strikes or other action.

On Capitol Hill, senior administration officials briefed lawmakers in private to explain why the U.S. is compelled to act against President Bashar Assad’s government. Further classified meetings were planned over the next three days.

Sen. John McCain of Arizona, a leading Senate hawk and the candidate Obama defeated for the presidency in 2008, said he’d discuss Syria with the president at the White House Monday.

Obama must convince skeptical Americans and their representatives in Congress of the need for more U.S. military action in the Muslim world after a decade of war in Iraq and Afghanistan.

He also is trying to assemble an international coalition, but finding it hard to land partners. They fear becoming involved in a conflict that has claimed more than 100,000 lives in the past two-and-a-half years and dragged in terrorist groups on both sides of the battlefield.

Only France is firmly on board among the major military powers. Britain’s Parliament rejected the use of force in a vote last week.

The United Nations on Sunday asked the head of its chemical weapons inspection team to expedite the analysis of tests from samples it collected from Syria last week.

Syria’s deputy foreign minister, Faysal Mikdad, claimed Sunday that Obama stepped back from his threat to attack because he lacks evidence of Syrian government involvement in the Aug. 21 attacks.

“The hesitation and the disappointment is so obvious in the words of President Obama yesterday,” Mikdad told reporters in Damascus. “The confusion was clear as well.”

Yet despite the official hubris, there were signs the regime was taking precautions.

The main Western-backed opposition group, the Syrian National Coalition, said the army moved troops as well as rocket launchers, artillery and other heavy weapons inside residential neighborhoods in cities nationwide. The coalition said Assad ordered detainees to be moved to military targets for use as human shields against U.S. strikes.

With Navy ships on standby in the eastern Mediterranean sea ready to launch missiles, Congress began a series of meetings that will take place over the next several days in preparation for a vote once lawmakers return from summer break, which is scheduled to end Sept. 9.

Dozens of members attended the two-hour classified briefing Sunday in the Capitol, though many emerged saying they needed to see more details of Obama’s plan and more facts about the alleged chemical weapons attack. Many feared giving Obama overly broad authority for military action.

Kerry was asked repeatedly in Sunday’s interviews what Obama would do if Congress didn’t give its consent. He said he believed lawmakers would recognize the grave implications of letting a chemical weapons attack go unchecked and what that might mean for U.S. efforts to force North Korea to get rid of its nuclear weapons and prevent Iran from acquiring such capability.

“We are not going to lose this vote,” Kerry said. “The credibility of the United States is on the line.”

Obama is likely to find stronger support in the Democrat-controlled Senate than the GOP-dominated House, yet he faces complicated battles in each. Some anti-war Democrats and many tea party-backed Republicans are opposed to any intervention at all, while hawks in both parties, such as McCain, feel the president must do far more to help Syria’s rebels oust Assad from power.