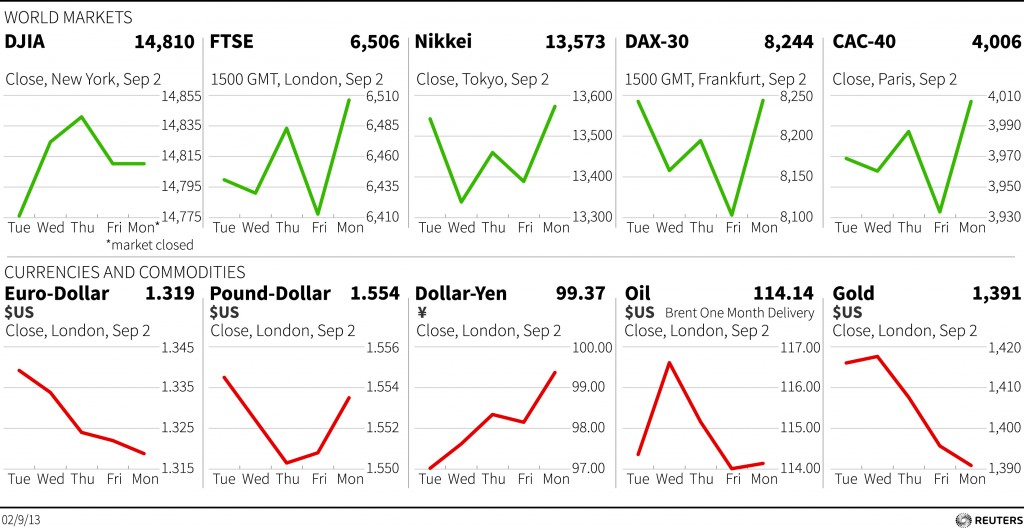 Global stock markets were mostly higher Monday after manufacturing surveys suggested China’s economic slowdown is plateauing. The gains came despite subdued growth in U.S. incomes and consumer spending that put a damper on Wall Street at the end of last week.

The possibility of a U.S. military strike against Syria continued to overhang markets but the initial panic has faded after the U.K. voted against British involvement.

The HSBC purchasing managers’ index rose to 50.1 in August, a level that indicates expansion as output and new orders edged up slightly and order backlogs rose at the fastest pace in two years. The official China Federation of Logistics and Purchasing PMI rose to 51.0 from July’s 50.3, which was the highest level and biggest increase this year.

Both indexes use a 100-point scale; numbers below 50 indicate contraction.

The signs of improvement in China’s manufacturing industry are encouraging news for its overseas suppliers as Chinese leaders try to reverse a slowdown that’s pulled economic growth to a two-decade low of 7.5 percent in the latest quarter.

The U.S. government reported Friday that Americans’ income and spending both increased just 0.1 percent in July. The scant rise suggested economic growth was off to a weak start in the second half of the year. It followed other reports showing steep drops in new-home sales and orders for long-lasting manufactured goods in July.

Benchmark crude for October delivery was down $1.05 at $106.60 a barrel in electronic trading on the New York Mercantile Exchange as Syria fears faded. The contract fell $1.15 to close at $107.65 on Friday.