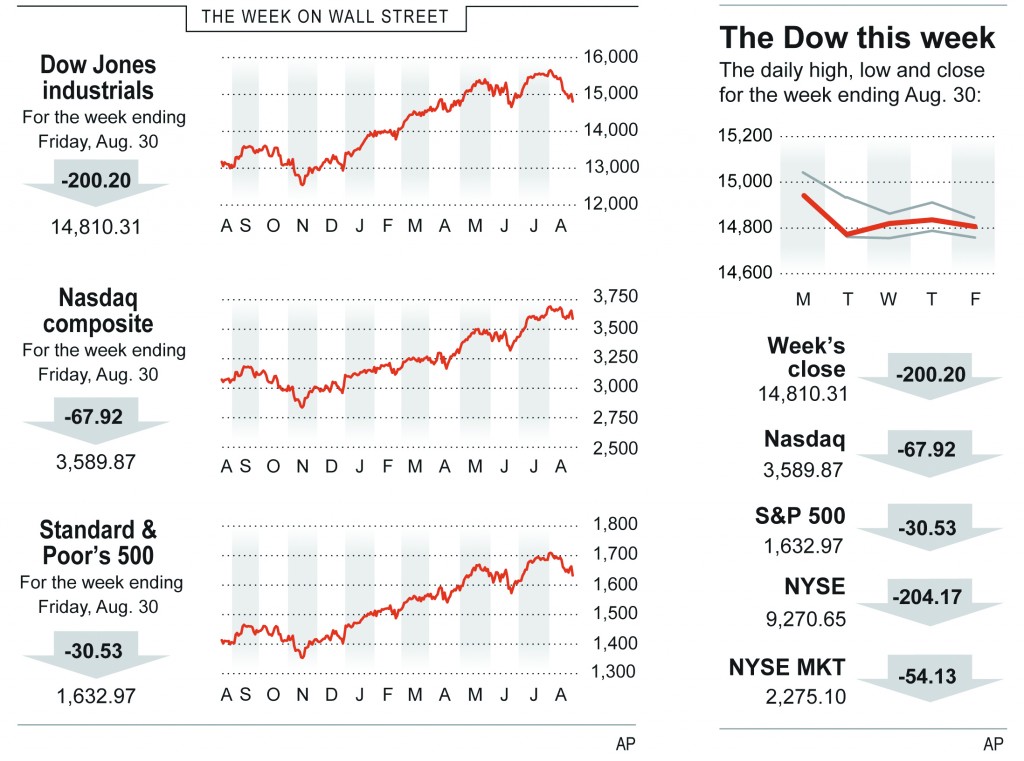 August was tough on the stock market. Now, investors face an even scarier September.

Disappointing news on consumer spending helped pull stocks lower Friday in a quiet end to the market’s worst month in more than a year.

The Standard & Poor’s 500 index closed August with a loss of 3.1 percent while the Dow Jones industrial average lost 4.4 percent. Both had their biggest one-month drop since May 2012.

The month began on a high note. On Aug. 2, news that unemployment fell to its lowest level in more than four years helped lift the S&P 500 index to a record high of 1,709.67. Then things quickly changed.

Bond yields jumped, sending mortgage rates up, as investors began speculating that the Federal Reserve would withdraw some of its support for the economy as early as September.

The latest wild card is Syria. The possibility that the U.S. could strike Bashar al-Assad’s regime propelled oil prices to a two-year high earlier in the week.

Before the market opened Friday, the government reported that Americans’ income and spending both increased just 0.1 percent in July. The scant rise suggested that economic growth is off to a weak start in the second half of the year. It followed other reports showing steep drops in new-home sales and orders for long-lasting manufactured goods in July.

The major indexes headed lower from the opening bell on Friday and never recovered. The S&P dropped 5.20 points, or 0.3 percent, to close at 1,632.97. Retail stores and other consumer-discretionary companies led eight of the index’s 10 industry groups to slight losses.

Many investors say the recent slide is hardly a surprise after the stock market had such a strong run. The S&P 500 is still up 14.5 percent this year.

September could be even more difficult. Craig Johnson, a technical market strategist at Piper Jaffray, said he expects trading to turn increasingly turbulent. That’s because September is stacked with so many events that could shake investors’ confidence.

Germany holds national elections that could change how the eurozone handles rescue loans for troubled countries. The U.S. Congress will need to pass a spending bill to avoid a government shutdown. And many people expect the Fed to reduce its bond purchases, which have bolstered the economy and stock market.

“Most people I talk to have scaled back and are taking a more defensive posture,” Johnson said. “They’re bracing for volatility.”

Salesforce.com jumped to an all-time high after the cloud-computing company reported strong quarterly results and raised its sales forecast late Thursday. Salesforce.com was up $5.48, or 13 percent, to $49.13, the biggest gain of any company in the S&P 500 index.

In the government bond market, the yield on the 10-year Treasury note edged up to 2.77 percent from 2.76 percent late Thursday.

Among other companies making moves Friday:

• General Electric reportedly plans to spin off its credit-card division through an initial public offering of stock. The IPO could come early next year, according to The Wall Street Journal. GE’s stock rose 3 cents, less than 0.1 percent, to $23.14.