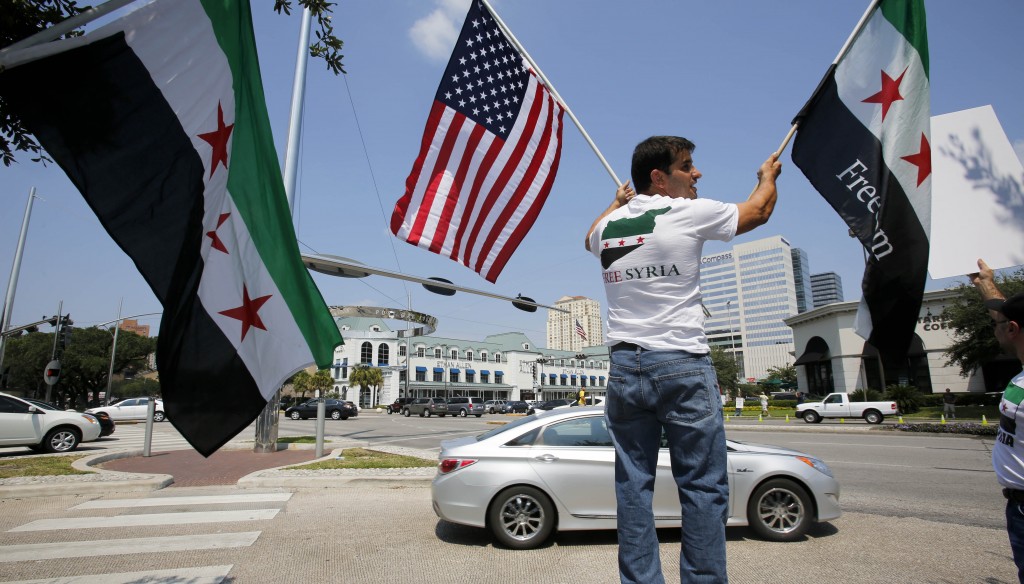 President Barack Obama stepped back from the brink on Saturday and delayed an imminent military strike against Syria to seek approval from the U.S. Congress in a gamble that will test his ability to project American strength abroad and deploy his own power at home.

Before Obama put on the brakes, the path had been cleared for a U.S. assault. Navy ships were in place and awaiting orders to launch missiles, and U.N. inspectors had left Syria after gathering evidence of a chemical weapons attack that U.S. officials say killed 1,429 people.

But Obama decided to seek the backing of U.S. lawmakers before attacking, as polls showed strong opposition from Americans already weary of wars in Iraq and Afghanistan. Approval will take at least 10 days, if it comes at all.

“Today I’m asking Congress to send a message to the world that we are ready to move as one nation,” Obama said in a dramatic shift announced in the White House Rose Garden.

Obama, whose credibility has been called into question for not punishing the government of Syrian President Bashar al-Assad for earlier poison gas attacks, warned lawmakers they must consider the cost of doing nothing in Syria.

“Here’s my question for every member of Congress and every member of the global community: What message will we send if a dictator can gas hundreds of children to death in plain sight and pay no price?” he said.

Obama’s approach has left in doubt whether the United States will carry through with the military steps that the president has already approved. Backing from lawmakers is by no means assured, with many Democrats and Republicans uneasy about intervening in a distant civil war in which 100,000 people have died over the past 2-1/2 years.

Lawmakers for the most part welcomed Obama’s move but there were no steps to bring lawmakers back to Washington early from their summer recess, which lasts until September 9.

“In consultation with the president, we expect the House to consider a measure the week of September 9,” said John Boehner, the top U.S. Republican and speaker of the House of Representatives. “This provides the president time to make his case to Congress and the American people.”

House members are to receive a classified briefing on Sunday from administration officials to hear the case against Syria. Officials briefed senators on Saturday.

British Prime Minister David Cameron, who was unable to persuade the British parliament to back action earlier in the week, welcomed Obama’s move, as did the government of French President Francois Hollande, with whom Obama spoke on Saturday.

In rebel-held areas of Syria, there was a sense of frustration and disappointment.

A Reuters reporter visited a group of fighters and activists sitting in a home in Aleppo city. They had not heard Obama’s speech, and when told of the president’s decision, they all agreed it meant there would be no U.S. strike.

“This is the same old hesitancy that the United States have tortured us with since the beginning of the revolution,” one said.

Aides said Obama had been working toward taking military action, but it was only late on Friday when he decided that he first wanted to seek the approval of Congress – an option his advisors had not previously discussed.

Senior administration officials who briefed reporters after Obama spoke said they believed Congress will vote in favor of a U.S. military strike because of the threat chemical weapons pose to the security of U.S. ally Israel and other friends in the region.

The August 21 attack – the deadliest single incident of the Syrian civil war and the world’s worst use of chemical arms since Iraq’s Saddam Hussein gassed thousands of Kurds in 1988 – has galvanized a reluctant Washington to use force after years on the sidelines.

The team of U.N. experts arrived in the Netherlands on Saturday carrying evidence and samples relating to the attack. They had flown from Beirut after crossing the border into Lebanon by road earlier in the day. No Western intervention had been expected as long as they were still on the ground in Syria.

The 20-member team had arrived in Damascus three days before the August 21 attack to investigate earlier accusations of chemical weapons use. After days holed up in a hotel, they visited the sites several times, taking blood and tissue samples from victims in rebel-held suburbs of Damascus and from soldiers at a government hospital.

War weariness cost Washington the support of its closest ally: Britain has backed action but was forced to pull out of the coalition after Cameron unexpectedly lost a vote over it in parliament on Thursday, straining London’s “special relationship” with Washington.

Syria and its main ally, Russia, say rebels carried out the gas attack as a provocation. Moscow has repeatedly used its U.N. Security Council veto to block action against Syria and says any attack would be illegal and only inflame the civil war there.

“I am convinced that (the chemical attack) is nothing more than a provocation by those who want to drag other countries into the Syrian conflict,” President Vladimir Putin said on Saturday.

Syria’s Foreign Ministry repeated its denial that the government had used chemical weapons against its own people. Washington says the Syrian denials are not credible and that the rebels would not have been able to launch such an attack.

Syria’s neighbor Turkey backs the use of force. The Arab League, whose members mainly oppose Assad, has said Syria is to blame for the chemical attack but so far stopped short of explicitly endorsing Western military strikes. Arab League foreign ministers are due to meet in Cairo on Sunday.

Iran, Assad’s main ally in the region, has condemned plans for strikes and warned of wider war.

Syria’s civil war has driven millions from their homes since 2011, when Assad’s forces cracked down on street protests and his enemies took up arms.

The war splits the Middle East on its main fault line between Sunni and Shi’ite Muslims and has already spread to neighboring Iraq and Lebanon, threatening to reignite their own civil wars.