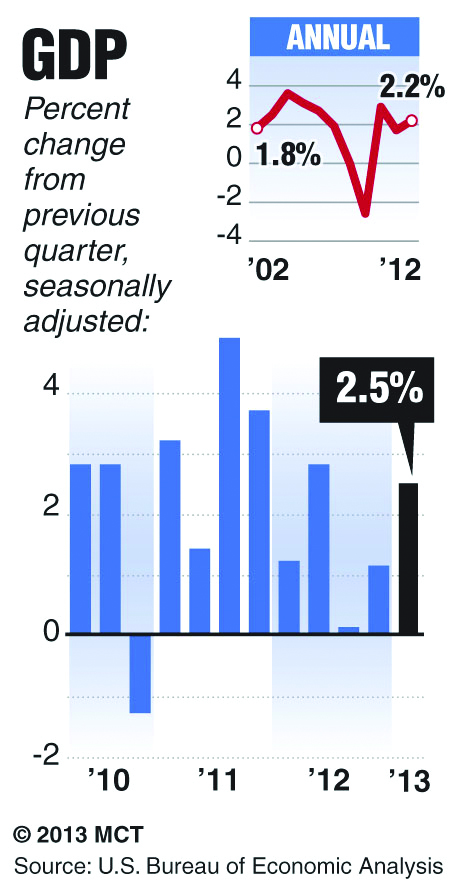 The Dow has gained 64 points over the past two days, not nearly enough to make up for its 170-point loss Tuesday as tensions over Syria rattled markets.

Verizon Communications was the biggest gainer among the blue chips after Britain’s Vodafone confirmed it was in talks with Verizon to sell its 45 percent stake their joint venture, Verizon Wireless.

Traders had two good economic reports to parse through Thursday. The U.S. economy grew at a 2.5 percent annual rate from April through June, much faster than previously estimated, the government said. Also, the Labor Department said the number of people who filed for unemployment benefits last week fell to 331,000, the fewest in five years.

While lower unemployment claims and an upward revision on GDP are both positive signs, most of Wall Street’s attention is focused on next week, when the August jobs report will be released. The Federal Reserve is expected to decide the fate of its massive bond-buying program in mid-September, and the jobs survey will be the last bit of significant economic data the Fed will have to consider before making its decision.

Traders also continue to watch Syria, where a U.S.-led attack could happen, although such a strike seems less imminent than earlier in the week. Oil fell to below $109 a barrel Thursday.

Investors worry that a limited strike could drag the U.S. and its allies into that nation’s civil war, or worse, set off a regional conflict in an area where so much of the world’s oil is located.

Beyond the news about Syria, it has been a mostly quiet week for stocks. Traders are winding down during the last week of summer and heading out for the Labor Day holiday this weekend.

In other corporate news, teen clothing store operator Guess jumped $3.51, or 13 percent, to $30.82 after the company reported second-quarter profit and revenue late Wednesday that blew past the expectations of Wall Street analysts. The retailer also raised its profit forecast for the year.

Campbell Soup fell $1.38, or 3 percent, to $43.33 after posting a loss for its fiscal fourth quarter. The company’s results were dragged down by a charge related to the potential sale of a European business. While the results topped Wall Street’s estimates, revenue missed expectations.