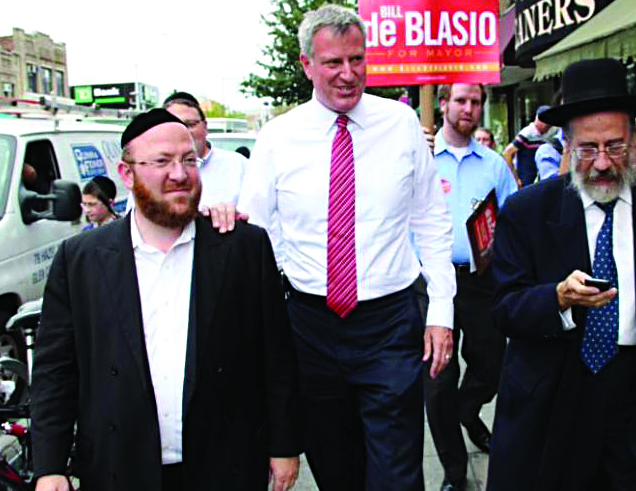 In the Public Advocate Race … Wait, What Is That?

The public advocate is effectively the city’s vice president, being first in line to succeed the mayor in case of incapacity to lead. But a new poll finds that 80 percent of likely Democratic primary voters cannot name even one of the five candidates vying for the office in the Sept. 10 primary.

Only 20 percent were able to correctly identify to Quinnipiac the names of state Sen. Daniel Squadron, Councilwoman Letitia James, former deputy public advocate Reshma Saujani, professor Cathy Guerriero or Sidique Wai. Of those who did say a name, seven percent named someone who was not running.

It is an office that previous polls found the public wants to do away with. However, this week’s survey finds that a strong 64 percent margin — a number boosted primarily by blacks — agree the city needs the ombudsman position, currently held by mayoral candidate Bill de Blasio.

The office, with a $4.4 million budget, was established nearly 15 years ago to be the people’s voice in government. Critics have said that it merely duplicates the job of the city council.

Bill de Blasio said he will raise taxes by a little more than he initially proposed after a report found that his signature mayoral campaign issue to raise tax rates in return for free preschool would not have enough funds.

The New York Times questioned de Blasio on his proposal, asking how the state legislature would agree to his tax hike in an election year, how he would overcome historic difficulties in signing up enough low-income families to make a difference, and if his 0.43 percent raise on those earning $500,000 would cover the bill.

In response, de Blasio revised his tax hike, which he says will only be in effect for five years, after which he will seek funding for his plan through other means. Instead of raising the 3.87 percent city tax rate to 4.3 percent, he would increase it to 4.4 percent.

Still, Mayor Michael Bloomberg said that it was improbable that Albany would go along with de Blasio’s plan.

But Gov. Andrew Cuomo has made a ‘no new taxes’ pledge, and it is unlikely he, as well as the Republican Senate, would allow a tax increase, especially next year when the governor and all state legislators are up for reelection.

De Blasio has staked his campaign on the tax hike issue. He has received celebrity and national figures endorsements and his popularity in the polls has risen over it. His rivals have attacked the proposal, with Bill Thompson dismissing it as a “tax in search of an idea.”

De Blasio responded sharply at a press conference on Thursday, calling his idea “bold,” while his opponents were campaigning “on the politics of small ideas.”

Inklings of a Fight Heard
At Third GOP Debate

Frontrunner Joe Lhota just rolled his eyes and George McDonald wondered if he was called a friend because of a loan the billionaire supermarket magnate gave him 25 years ago — charging 11 percent interest.

Aside from that, the contenders in the thus-far quiet Republican primary agreed on most issues. They all wanted to keep Mayor Michael Bloomberg’s state standardized tests in public schools, even agreeing to name a city landmark after Bloomberg if elected.

The biggest disagreements came over the use of the stop-question-frisk police tactic, an issue supported by half the voters but strongly opposed by the Democratic candidates.

The three contenders were asked what they would do if their own child was stopped.

Lhota said one of his first moves would be to read his daughter the Supreme Court decision that legalizes the practice. He would become upset only if the officer did not follow procedure, he said.

Catsimatidis, who said he believed the tactic would soon be replaced by improvements in technology, would have a “father-to-son talk” with his son.

And McDonald said that his son “wouldn’t be stopped” since he lives in an affluent neighborhood, not a high-crime area.

Lhota deemed the funding for Catsimaditis’ plan to station a police officer in high-crime public housing buildings as unrealistic.

“I was budget director of the City of New York,” said Lhota, who worked in former mayor Rudolph Giuliani’s administration and was also head of the Metropolitan Transit Authority. “Don’t make up numbers.”

When Catsimatidis sharply denied that claim, Lhota exclaimed “Why are you so angry?”

“I’m not,” Catsimatidis shot back.

At one point McDonald memorably retorted to Catsimatidis, who is worth $3 billion, that he could not compare to Bloomberg, one of the world’s 25 richest people.

Catsimatidis laughed, saying “He’s certainly worth a lot more money than I am.”

The candidates were asked if they would follow Bloomberg’s lead and serve for $1. Lhota and McDonald quickly said no. Catsimatidis said he’d serve for 99 cents “because I’m a grocer.”

“Vote No! To Catsimatidis: HE’S NOT ONE OF US,” says Lhota, a deputy mayor in the Giuliani administration. Catsimatidis, who was a Democrat until 2007, donated at least $10,000 to the Dinkins campaign in his successful campaign against Giuliani in 1989, and his losing race in 1993.

One side of the mailer displays a photo of a tuxedoed Catsimatidis posing with Dinkins. The other side shows Lhota and Giuliani deep in conversation.

“You can tell an awful lot about a man by the company he keeps,” the ad reads.

Meanwhile, on Tuesday, Catsimatidis walked a tightrope in an interview about Giuliani.

Asked how Catsimatidis could attack Lhota without degrading Giuliani, Catsimatidis said, “I’m sure he won’t make it personal.”