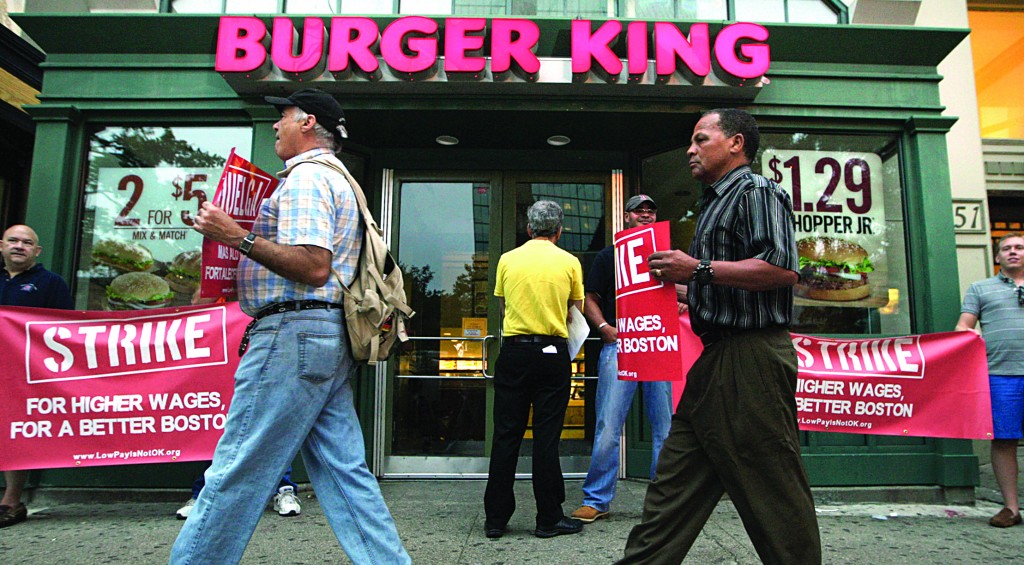 Fast-food workers and their supporters beat drums, blew whistles and chanted slogans Thursday on picket lines in dozens of U.S. cities, marking the largest protests yet in their quest for higher wages.

The nationwide day of demonstrations came after similar actions organized by unions and community groups over the past several months. Workers are calling for the right to unionize without interference from employers and for pay of $15 an hour. That’s more than double the federal minimum wage of $7.25 an hour, or $15,000 a year for full-time employees.

Thursday’s walkouts and protests reached about 60 cities, including New York, Chicago and Detroit, organizers said. But the turnout varied significantly. Some targeted restaurants were temporarily unable to do business because they had too few employees, and others seemingly operated normally.

Ryan Carter, a 29-year-old who bought a $1 cup of coffee at a New York McDonald’s where protesters gathered, said he “absolutely” supported the demand for higher wages.

“They work harder than the billionaires in this city,” he said. But Carter said he didn’t plan to stop his regular trips to McDonald’s.

Jobs in low-wage industries have led the economic recovery. Advocates for a higher minimum wage say that makes it crucial that they pay enough for workers who support families.

The restaurant industry says it already operates on thin margins and insists that sharply higher wages would lead to steeper prices for customers and fewer opportunities for job seekers.

The drive for better pay comes as the White House, some members of Congress and economists seek to raise the federal minimum wage. But most proposals are for a more modest increase, with President Obama suggesting $9 an hour.

The Service Employees International Union, which represents more than 2 million workers in health care, janitorial and other industries, has been providing financial support and training for local organizers in the fast-food strikes around the country.

In New York, City Council speaker and mayoral candidate Christine Quinn joined about 300 to 400 workers and supporters in a march before the group flooded into a McDonald’s near the Empire State Building. Shortly after the demonstration, however, the restaurant seemed to be operating normally, and a few customers said they hadn’t heard of the movement. The same was true at a McDonald’s a few blocks away.