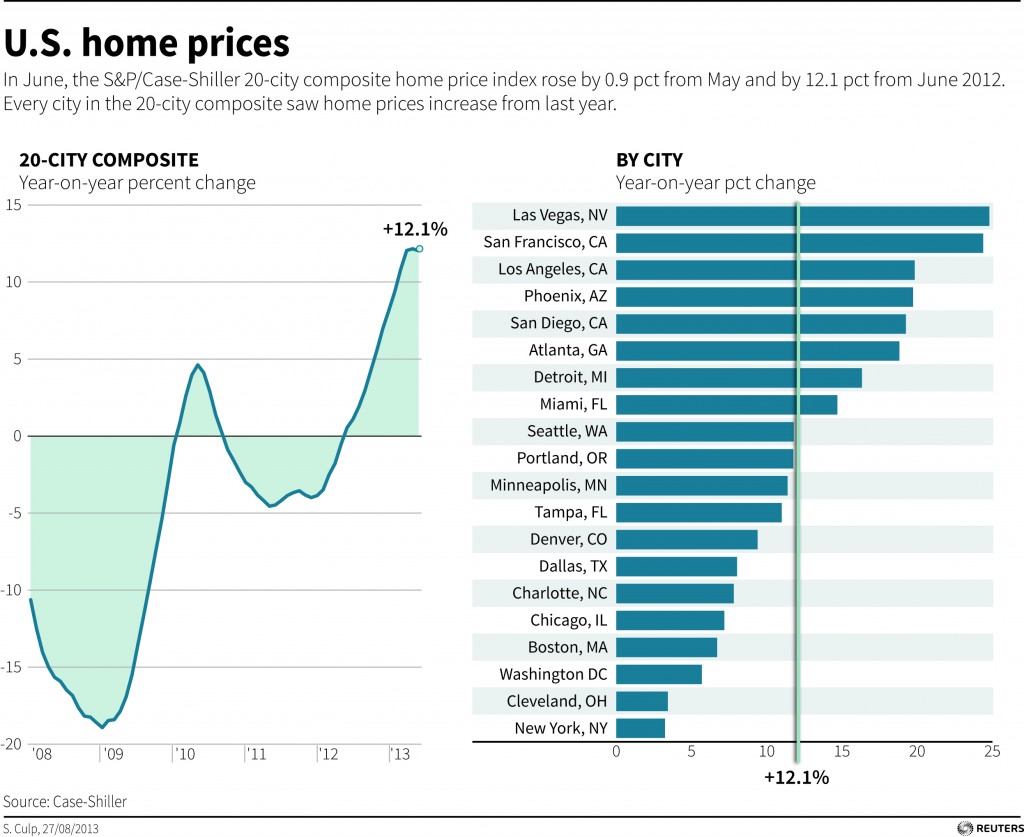 U.S. home prices rose 12.1 percent in June from a year earlier, nearly matching a seven-year high. But month-over-month price gains slowed in most markets, a sign that higher mortgage rates may weigh on the housing recovery.

The Standard & Poor’s/Case-Shiller 20-city home price index slowed only marginally from May’s year-over-year gain of 12.2 percent, the fastest since March 2006. And all 20 cities posted gains from the previous month and compared with a year ago, according to the report released Tuesday.

Home prices in Las Vegas soared 24.9 percent from a year earlier, to lead all cities. Purchases by investors have helped drive that increase.

Other cities hit hard by the housing bust also posted stunning gains in the past year. Prices have jumped 24.5 percent in San Francisco, and nearly 20 percent in both Los Angeles and Phoenix.

Still, 14 of the 20 cities posted smaller gains in June compared with May. That’s unusual, considering June is the middle of the summer buying season.

And in cities less affected by the housing crisis, gains have been more modest. Prices in New York and Cleveland are about 3 percent higher than a year earlier. Prices rose 5.7 percent in Washington, D.C. and 6.7 percent in Boston.

Most economists expect the overall index to slow to single digits in the coming months, which they see as a more sustainable pace.

“The fundamentals of the housing market are solid,” said Gus Faucher, senior economist at PNC Financial Services. “Despite higher prices and mortgage rates, affordability is still much better than it was prior to the housing crash….Many households that put off buying a home in recent years are now getting back into the market, boosting demand. Lending standards for mortgage loans are easing somewhat.”

The index covers roughly half of U.S. homes. It measures prices compared with those in January 2000 and creates a three-month moving average. The June figures are the latest available. They are not adjusted for seasonal variations, so the monthly gains reflect more buying activity over the summer.

Steady job gains and low mortgage rates have encouraged more Americans to buy homes. And even as demand has risen, a limited number of homes have been available for sale. That combination has led to sharp price gains.

But mortgage rates have climbed more than a full percentage point since May. The increase has already slowed sales of new homes in July. And economists expect it could drag re-sales lower in August.

Economists said the index likely captured only part of the recent increase in mortgage rates, some of which occurred after June.

Other factors may be slowing price gains. Investors made up only 16 percent of buyers in July, down from 22 percent a year earlier. That reduces competition for purchases. And foreclosed homes, which usually sell for fire-sale prices, are also making up a smaller proportion of sales.

“This ongoing stabilization … is happening, and it’s not the end of the world for the housing market,” Humphries said.

Rising prices have several economic benefits. They make homeowners feel wealthier and more likely to spend. And they encourage more Americans to sell homes, which boosts the supply of available homes, leading to more sales.