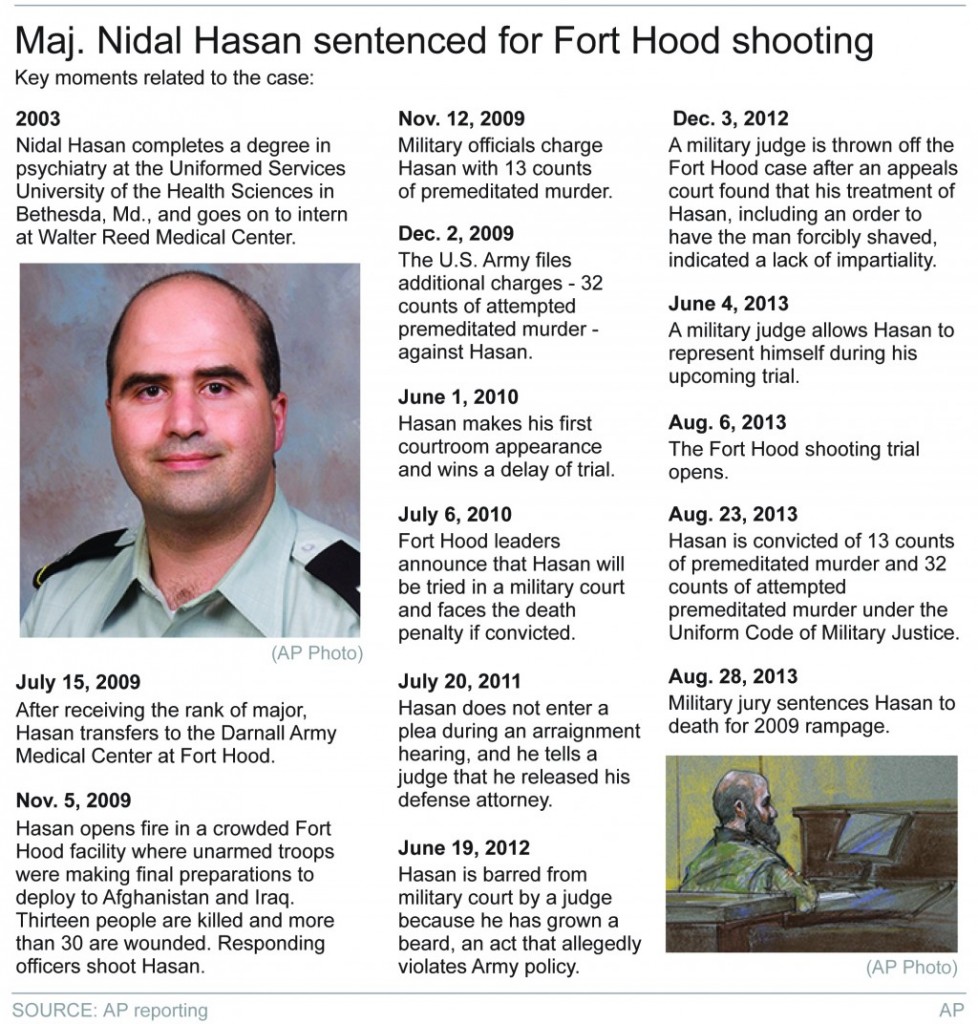 A military jury on Wednesday sentenced Maj. Nidal Hasan to death for the 2009 shooting rampage at Fort Hood, delivering the only punishment the Army believed fit for an attack on fellow unarmed soldiers. The sentence also was one that Hasan appeared to seek in a self-proclaimed effort to become a martyr.

The American-born Muslim, who has said he acted to protect Islamic insurgents abroad from American aggression, never denied killing 13 people and wounding more than 30 others at the Texas military base. In opening statements, he told jurors that evidence would show he was the shooter and described himself as a soldier who had “switched sides.”

The same jurors who convicted Hasan last week needed to agree unanimously on a death sentence on Wednesday, though the 42-year-old faced a minimum sentence of life in prison.

Kathy Platoni, an Army reservist who still struggles with images of Capt. John Gaffaney bleeding to death near her, said she was surprised by the verdict but not opposed to the punishment.

“What Nidal Hasan wanted was to be a martyr and so many of the [victims’] families had spoken to the issue of not giving him what he wants because this is his own personal holy war,” said Platoni, who watched most of the trial from inside the courtroom.

“But on the other hand, this is from the bottom of my heart, he doesn’t deserve to live,” she said. “I don’t know how long it takes for a death sentence to be carried out, but the world will be a better place without him.”

Hasan had no visible reaction when the verdict was read, staring first at the jury forewoman and then at the judge. Some victims’ relatives were in the courtroom but also showed no reaction, which the judge had warned against before the verdict.

Officials said Hasan will be taken back to a county jail and then transported on the first available military flight to the military prison at Fort Leavenworth in Kansas.

Hasan could become the first American soldier executed in more than half a century. But because the military justice system requires a lengthy appeals process, years or even decades could pass before he is put to death.