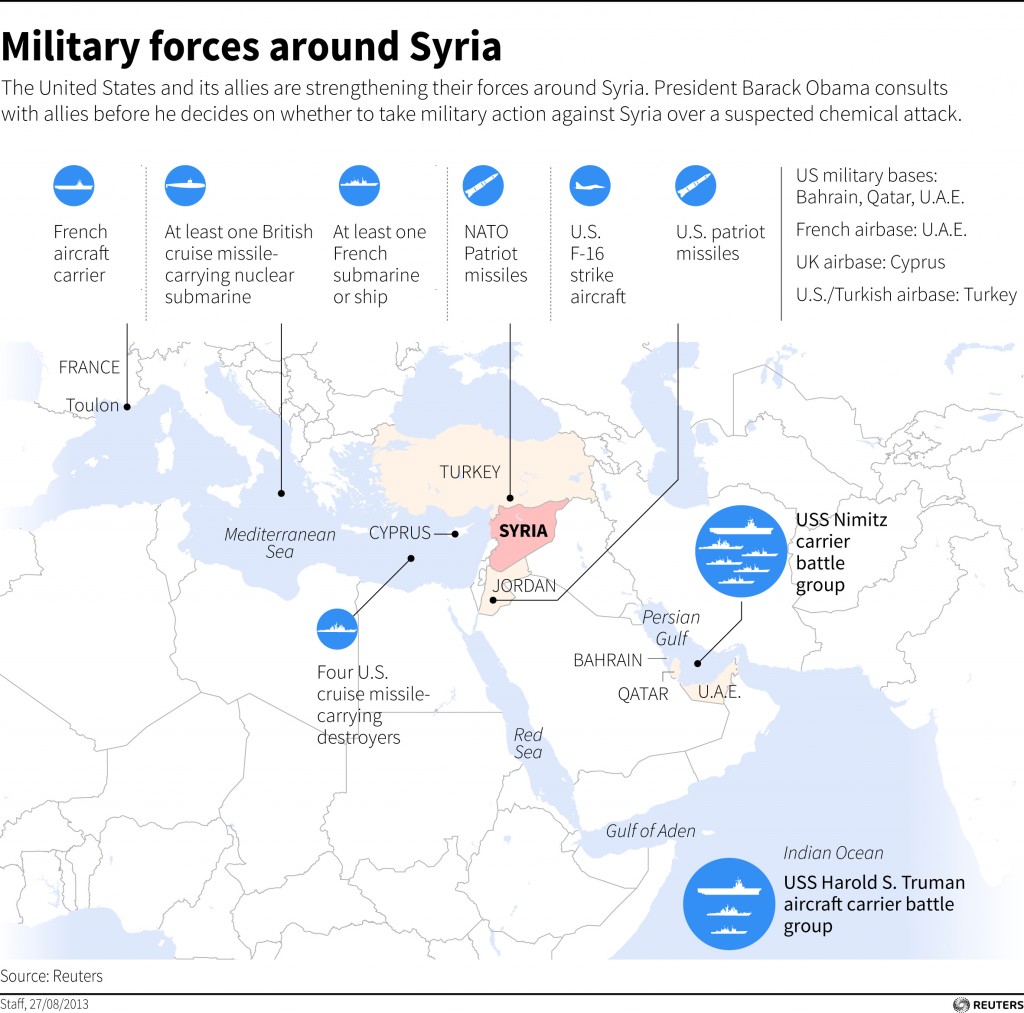 Shops in Damascus are open, and traffic chokes the main thoroughfares, but the mood in the capital, exhausted by more than two years of civil war, is growing restive as Syria faces the prospect of a military strike by Western powers.

Despite the bustle of daily life in those areas of the city not directly caught up in conflict, there is apprehension at what foreign intervention would look like, but also hope.

Western powers could attack within days to punish President Bashar al-Assad for a poison gas attack last week that killed hundreds of civilians, envoys from the United States and its allies have told rebels fighting for his overthrow, according to sources who were present.

“The big fear is that they’ll make the same mistakes they made in Libya and Iraq. They’ll hit civilian targets, and then they’ll cry that it was by mistake, but we’ll get killed in the thousands,” said Ziyad, a man in his fifties.

Echoing local media reports, some residents said they expected the strike to begin later this week but not to last long.

“If I could, I’d leave town for a week until this is over. It’ll be only a matter of days,” said Haitham, a retired civil servant who lives in the northern neighborhood of Hameh and opposes the government of President Bashar Al-Assad.

He compared a possible Western assault to Israeli attacks in January and May that hit a military research facility near his home but elicited little response from the Syrian government.

The possibility of direct military intervention has not yet affected daily routines, many long since shaped by more than two years of shelling, power outages and food shortages. But for many Syrians still living in the capital the prospect of multiple raids has become a frequent topic of conversation.

In the opposition-held suburbs of Damascus that have witnessed relentless shelling and an alleged chemical weapons attack last week, residents embraced word of possible foreign intervention.

“Everyone is welcoming the idea,” said Bara Abdelrahaman, an opposition supporter in the town of Saqba. “The people are tired, they need a way out of this, and so we’re ready to cooperate with them without any conditions. Anything to help get rid of this dog.”

Abu Omar, a doctor in Mouadamiya, which was among the districts hit by the poison gas attacks, said he was excited about a U.S. strike, adding that it couldn’t make the situation any worse.

“We’ve been living like we’re on another planet — just living off what we can grow, completely under siege, with constant, constant artillery and air raids, and on top of that we’re cut off from the outside world,” he said. “The rebels are exhausted. Something has to change.”

In government-held areas of Damascus, residents worried about the broader consequences of Western involvement.

“Iran and Damascus have threatened that the entire region will blow up into balls of fire if the U.S. strikes,” said Amal, a grandmother and a Shi’ite Muslim, among the minority in Syria, but closer to Assad’s Alawite sect, which occupies most positions of influence in the country.

Even here some residents hoped that it might change things for the better, though they doubted it would end the war.

“We don’t wish for a foreign strike against Syria. No one wishes that on their country,” said Yasin, a taxi driver. “But to be honest, at this point, we’ll take anything to calm things down.”