Israel As Strike on Syria Looms, Israel Prepares for Every Scenario
Israel 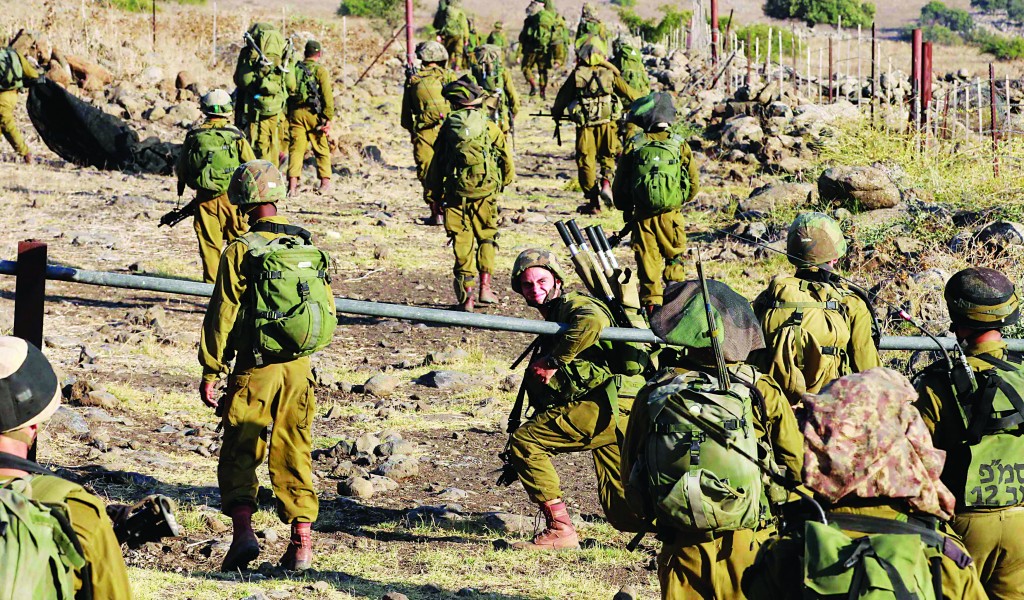 The day of attack is nearing.

The Americans are in the final hours of preparing for a large-scale operation in Syria, and in Israel, they are readying for every scenario that may develop as a result of the actions of the Americans and their allies.

The security-diplomacy cabinet convened on Wednesday for a special meeting headed by Prime Minister Binyamin Netanyahu and IDF officials. They approved an immediate call-up of thousands of reserve soldiers, but the army has decided to execute the call-up gradually. A short time later, one thousand soldiers were called up, among them pilots, air force personnel, home front command soldiers and others.

The prime minister said at the end of a security consultation that he held in Tel Aviv that “Pursuant to an assessment of the security situation that took place, there is no reason to alter the daily routine. Concurrently, we are preparing for every scenario. The IDF is getting ready to defend against any threat and to respond with force to any attempt to harm Israeli citizens.”

Chief of General Staff General Benny Gantz is in close contact with his American counterpart, who is supposed to apprise of him the timing of the attack. Israel is convinced that the notice will come enough hours ahead of time to enable a quick completion of preparations on the Israel side.

The IDF says that all military anti-missile installations are on the highest alert and are ready to shoot down any airborne vehicle or projectile that the enemies try to fire into Israel. Another Iron Dome battery has been moved to the north of the country, making it the sixth one in the region. The Central region will be augmented with an additional Patriot missile battery.

The IDF is preparing to cancel the Shabbos furlough for soldiers, who will remain at their bases, ready for action. A senior military source told Hamodia that “the Western coalition, headed by the United States, is coming together, arming itself and preparing for the operation. The Americans already know what the scope of their planned attack will be.”

Over the past two days, demand has skyrocketed at gas mask distribution centers in Israel. At several locations, fights broke out between citizens and distributors, or between people waiting on the long lines. In at least one distribution center in Yerushalayim, the situation became so bad that the mass of people waiting fell upon the stacks of gas masks, grabbed them and left. The police had to be called to restore control. The Home Front Command said that  Wednesday alone, 20,000 people mobbed the distribution stations. Nevertheless, the IDF had no plans to open emergency stations, despite promising to do so if the time came when a conflict was imminent.

Few chareidi people were visible on the long lines, because the IDF, instructed by the political echelons, continues to refuse to provide gas masks suitable for men with beards. In several places, bearded chareidim who came to ask for gas masks were told, “Go home and shave your beards, then you’ll get masks.”

“We received a mandate to call up thousands of reservists,” the army source said, but initially, only the first stage of that will be actualized at this point. They will man vital systems in the air defense network, and will operate air force, home front command and military intelligence posts.” The senior official related that the Chief of General Staff is in touch with his American counterpart, General Dempsey, and it’s safe to assume that Israel will know before the attack begins that it is imminent. “The status is now routine,and it will change once the attack begins. There is no suspension on leaves right now, but we’ve made it clear to the relevant units not to release soldiers for Shabbos and to wait for developments.”

According to the source, the assessment in Israel is still that the chances of a Syria counterattack on Israel are very low, but due to the fact that that there is still that slight chance, Israel is preparing for the worst-case scenario, although the army really hopes not to have activate its forces.

According to the source, “Israel has the responsibility to protect its citizens, and that’s why it has to be prepared for everything. That’s why they have prepared the anti-missile batteries and anti-aircraft missiles that will be positioned in the northern part of the country at first. Later it will be decided whether to deploy them further south.”

Defense Minister Moshe Yaalon, who spoke yesterday at an economics conference in Tel Aviv reiterated that “our borders remain stable despite minor exceptions. Our responses make our red lines clear and are based on deterrence. Therefore, our borders are quiet, and the territories and Sinai are calm,” Yaalon stressed.

The Defense Minister added, “What’s happening in Syria is a historic event that happens once in a century, whereby a sovereign country is being dismantled.” In his opinion, the situation in Syria stems from Western mistakes. There were people in the West who thought they knew what was good for the Arabs, indicated by what happened in Tunisia, Egypt, Libya, and Iraq. There, too, states were dismantled, and the results were sectarian wars. At a time like this, tensions are created, among other things because of world jihad forces. “These tensions can be directed towards us,” Yaalon said.

“The Syrians crossed the red line determined by the Americans, i.e. using chemical weapons. There are horrific scenes, but the issue is not ours to deal with, and the West and the United States are handling it. A cabinet meeting was held yesterday on the subject. We are ready and prepared, but there is no panic, there is no escalation and things are being done with discretion. We are not trigger-happy, but anyone who assumes they can threaten us will encounter our might,” he warned.