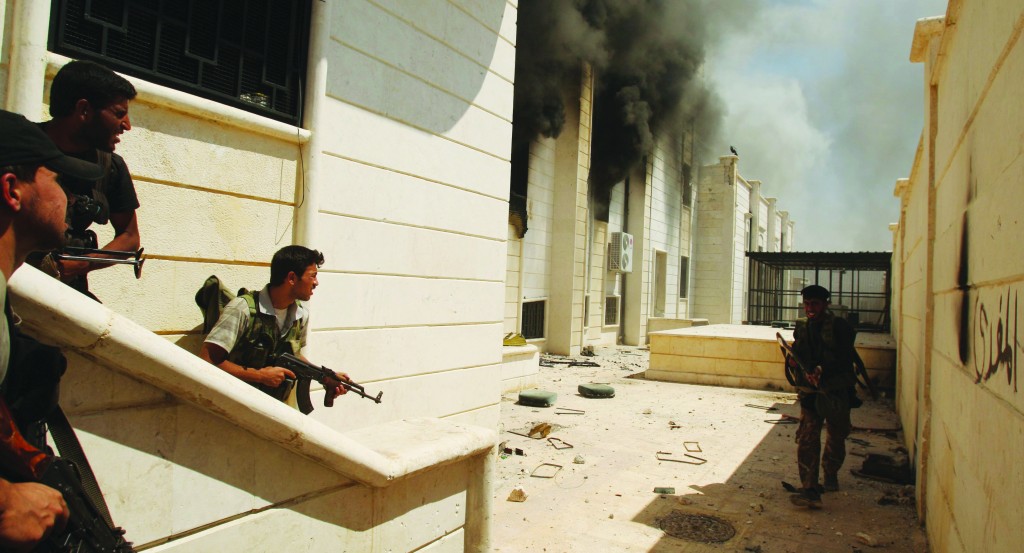 With every day that passes, it becomes likelier that the U.S. will get more deeply involved in the Syrian conflict. The most recent use of chemical weapons by the Assad regime has galvanized international support for some sort of military intervention. While there have been unconfirmed reports that the CIA has been covertly arming the Syrian rebels, the chance that this will become official policy is now very real.

American warships are reported to be moving into position to launch cruise missile attacks on Syrian military targets. According to a statement released by British Prime Minister David Cameron’s office, both he and President Obama had “reiterated that significant use of chemical weapons would merit a serious response from the international community and both have tasked officials to examine all the options.”

While it is important to, as Downing Street said, “[uphold] the prohibition on the use of chemical weapons and [deter] further outrages,” the question of whether it is really wise to get deeply involved in this conflict is, in fact, the one in front of the international community.

The hesitance of the administration is understandable. The last two Middle East conflicts in which the U.S. officially chose a side ended in disaster. The removal of Gadhafi in Libya created a power vacuum that allowed for the mismanagement which ultimately led to the Benghazi terror attack. And when former ambassador to Egypt Frank Wisner was sent as an envoy to Hosni Mubarak to tell him not to run for reelection, and the State Department noticeably backed away from the Egyptian president — these actions paved the way for the Muslim Brotherhood, resulting in the utter chaos that envelops Egypt until today.

So what would be the best way forward in Syria? The argument to arm and assist the rebels is a compelling one — if it were not for a few inconvenient truths. Senator John McCain, noted interventionist, is one of the loudest voices calling for no-fly zones and arms for the rebels. In late May, McCain paid a visit to Syria and met with high-ranking “Free Syrian Army” leaders, as a way to promote his position. It ended up hurting his cause, however, when it turned out that one of the men with whom he was photographed was Mohammad Nour, a terrorist who was identified by men in whose kidnapping he had been involved. It served to illustrate that much as in Libya — where rebel commanders now admit their fighters are aligned with al-Qaida — putting too much trust in the rebels is an act of folly.

According to Middle East Forum founder and president Daniel Pipes, the wisest course of action is for the U.S. to support “whichever side is losing, so as to prolong their conflict.” In a series of pieces written as the conflict has unfolded, Pipes quoted the words of Henry Kissinger, who said about the Iran-Iraq war: “It’s a pity they both can’t lose.” The argument made is to prolong the conflict, aiding whichever side needs it more. Pipes himself has supported different sides in the conflict at different times, when it seemed like the other had the upper hand.

Besides weakening the parties involved and keeping them occupied, as was the case in the Iran-Iraq war, the Syrian civil war seems to have split the country into three. The Assad government holds the area running from the southern border with Jordan to the Mediterranean coast. The Islamic rebels control territories spanning Idlib and Aleppo in the north, while the Kurdish minority holds the northeast. According to Jamal Khashoggi, a progressive Saudi journalist, this is ideal. He wrote in al-Hayat, an Arabic newspaper based in London, that “Israel …will benefit from Syria’s division into three weak rival states that will never again represent a strategic threat for Israel.”

There are flaws with Pipes’ argument, but flaws which can easily be addressed. His overall premise is correct — that there is value in prolonging the conflict. However, the fact that it has kept on for this long, and more or less achieved the goal of three Syrian states, undercuts his argument for aiding anyone. The same objective can be, and has been, achieved by staying out of this fight. Staying out of the civil war also avoids the moral issue of taking a hands-on approach to encouraging bloodshed. Many innocent people have lost their lives in this conflict; it need not be by our hands as well.

The West has a responsibility to punish Assad for the use of chemical weapons as a means of deterring future use, but in no way should this be used as an excuse to depose him and put an end to this conflict.