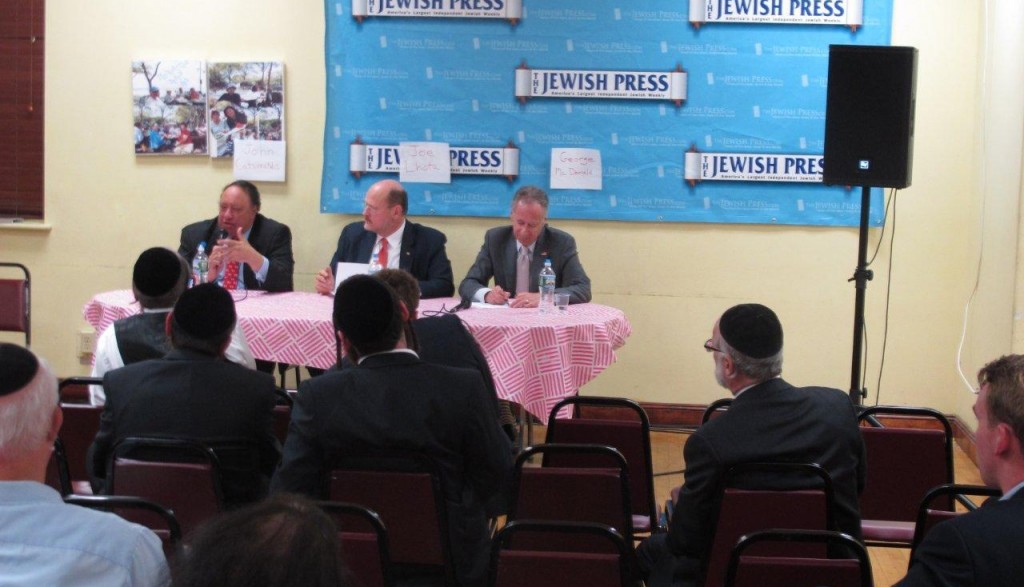 New York City is one of the nation’s most liberal cities, yet the Republican Party has won the last five mayoral elections. But the GOP’s eventual nominee this year — who will emerge from a primary that has been wildly overshadowed by its Democratic counterpart — will face steep odds in trying to make it six in November.

Joe Lhota, the former head of the region’s transportation agency, is considered the favorite over John Catsimatidis, a billionaire entrepreneur best known for owning a grocery store chain. George McDonald, who founded a nonprofit that finds jobs for the homeless, is currently polling third.

But all three would be trounced by any of the top Democratic candidates in a general election showdown in a city where registered Democrats outnumber Republicans 6-to-1 and President Barack Obama won 81 percent of the vote in 2012.

Rudolph Giuliani was swept into office in 1993, in part because of frustration over high crime. And Michael Bloomberg, who switched his party affiliation from Democrat to run in the less-crowded GOP primary, won in 2001, partly because he got Giuliani’s endorsement after the Sept. 11 terror attacks.

There does not appear to be any similar game-changers on the horizon for Republicans this year.

“Right now, there is a sense that the public is done with Bloomberg and is ready for a change,” said William Eimicke, professor of international and public affairs at Columbia University. “It won’t be easy for Republicans.”

Lhota, who served as deputy mayor under Giuliani, was chairman of the Metropolitan Transit Authority when Hurricane Sandy struck 10 months ago. He was part of the decision to shut down the transit system before the storm’s arrival; that gusty call was credited with limiting damage.

Lhota, 58, resigned his post in December to declare his candidacy and established himself as a fundraising behemoth. A fiscal conservative with liberal leanings on social and moral issues, he has focused his campaign on maintaining the city’s historically low crime rates.

But his rollout hasn’t been totally smooth: The MTA is an unpopular agency, his debate appearances have been stilted, and he was forced to apologize after he compared Port Authority police officers to “mall cops.”

That gaffe is at the center of the newest ad launched by Catsimatidis, who is trying to become the city’s second straight billionaire mayor. But Catsimatidis does not quite have Bloomberg’s bankroll: Forbes estimates that he has a $3 billion fortune, as opposed to the mayor’s $27 billion. While Bloomberg spent $102 million of his own money financing his 2009 campaign, Catsimatidis has spent $4 million so far.

Catsimatidis, 64, is a big donor to both Republicans and Democrats and often lends his private plane to Bill Clinton. An immigrant from Greece, he grew up in poverty but now oversees a Pennsylvania oil refinery, a network of Kwik Fill gas stations and the Gristedes supermarket chain.

He has a rambling, folksy charm, but his platform has been short on specifics, save for plans to expand the city’s vocational school network and host the World’s Fair.

Lhota has consistently led in the polls. In a recent Marist College survey, he was ahead of Catsimatidis 33 percent to 22 percent, though the small sample size of just 132 likely Republican primary voters produced a margin of error of 8.5 points. Additionally, 30 percent were undecided.

McDonald, who tallied 12 percent, has struggled since he failed to overturn the city’s laws that limit the size of individual donations. The 69-year-old founder of the Doe Fund has made little impact on the race except when he was called “Grandpa” by former Rep. Anthony Weiner at a mayoral forum.

“Your average New York City Republican would be a Democrat anywhere else,” said Costas Panagopoulos, a political science professor at Fordham University. “From an ideological point of view, there is not much difference.”

Panagopoulos also suggested the GOP may benefit from being under the radar this year.

“This is the most contentious Democratic primary in decades,” he said. “The Democrats are beating themselves up, and that could help the Republican nominee.”