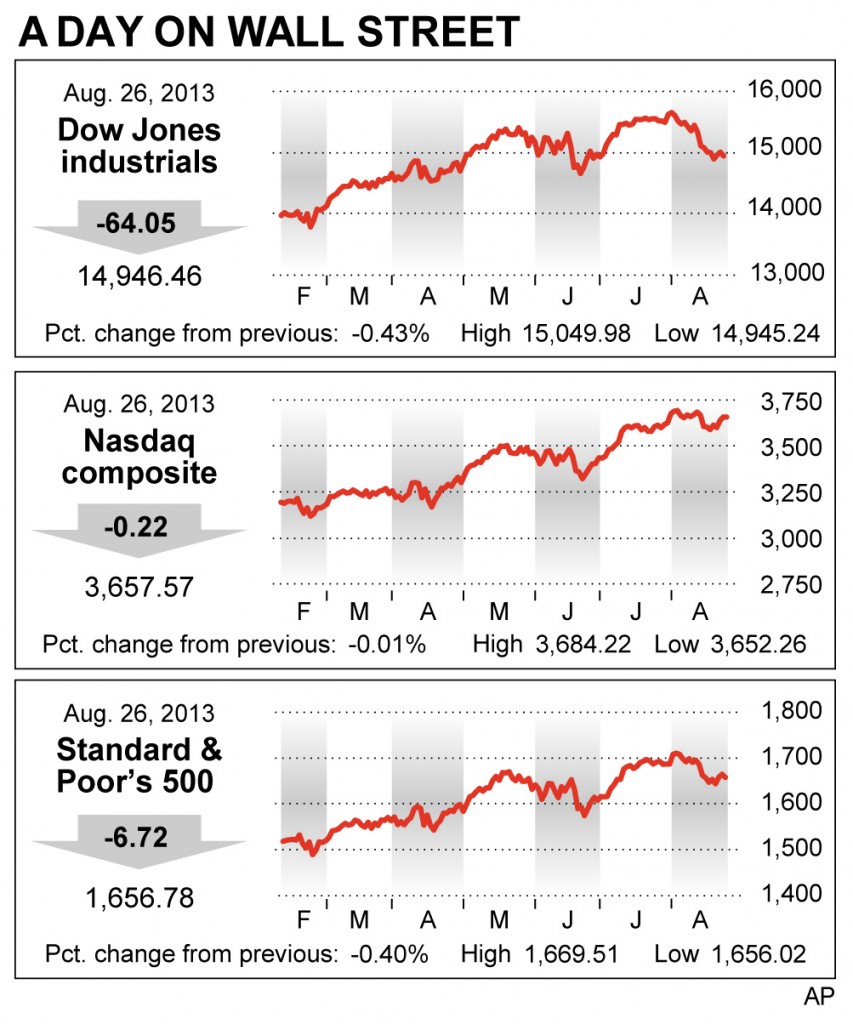 The stock market sagged Monday after the Obama administration ratcheted up pressure against Syria.

Secretary of State John Kerry said there was “undeniable” evidence of a large-scale chemical weapons attack in Syria last week, and his remarks suggested that the administration was edging closer to a military response.

Major indexes had been holding onto slight gains on Monday until the last hour of trading. That’s when Kerry’s talk appeared to jolt it lower, said Stephen J. Carl, head equity trader at the Williams Capital Group.

A handful of corporate deals gave the market a lift in the early going. Amgen surged following its announcement late Sunday that the biotech giant plans to buy Onyx Pharmaceuticals for $10.4 billion. The acquisition would give Amgen three approved cancer treatments and several other potential drugs.

Jack Ablin, the chief investment officer at BMO Private Bank in Chicago, said it’s likely that investors are looking past the one bad economic report because so many major events loom ahead.

The Federal Reserve will start a two-day meeting Sept. 17, during which officials will discuss phasing out support for the economy. After that, Germany holds national elections that could change how the region handles rescue loans for troubled countries. The U.S. Congress returns from its summer break next week and will take up a new budget before the fiscal year starts on Oct. 1.

The market is expected stay quiet this week, when many traders typically take a summer break before returning after Labor Day.

In corporate news, shares of TMS International jumped 12 percent after members of the Pritzker family agreed to buy the industrial company. The Pritzker family, one of America’s wealthiest, operates a global industrial conglomerate and founded the Hyatt hotel chain. TMS jumped $1.91 to $17.48.

With five trading days left in August, the major indexes are on track to end the month with slight losses. The Dow has lost 3.6 percent. If that holds, it would be the Dow’s worst month since May 2012.

In the market for U.S. government bonds, the yield on the 10-year note slipped to 2.78 percent from 2.82 percent late Friday.