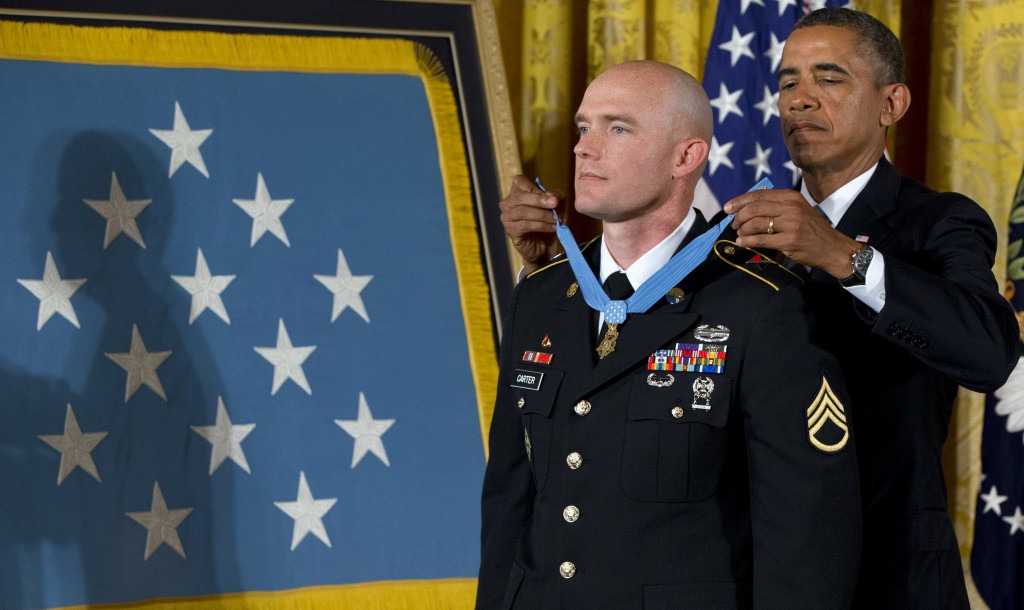 President Barack Obama bestowed the nation’s highest military honor, the Medal of Honor, on Army Staff Sgt. Ty Carter on Monday, saluting the veteran of the war in Afghanistan as “the essence of true heroism,” one still engaged in a battle against the lingering emotional fallout of war.

Carter risked his life to save an injured soldier, resupply ammunition to his comrades and render first aid during intense fighting in a remote mountain outpost four years ago.

“As these soldiers and families will tell you, they’re a family forged in battle, and loss, and love,” Obama said as Carter stood at his side and members of his unit watched in the White House East Room.

Then, as an Army specialist, Carter sprinted from his barracks into a ferocious firefight, a day-long battle on Oct. 3, 2009 that killed eight of his fellow soldiers as they tried to defend their outpost — at the bottom of a valley and surrounded by high mountains — from the onslaught of a much larger force of Taliban and local fighters.

Still suffering from post-traumatic stress syndrome, Carter stood nearly emotionless during the ceremony, although a faint smile crossed his face near the end that turned into a broad grin as Obama hung the metal and its blue ribbon around his neck and the audience — which included 40 members of the recipient’s family — answered with a rousing standing ovation.

Later, Carter told reporters outside the White House that winning the medal had been “one of the greatest experiences” for his family and that he would “strive to live up to the responsibility.”

He also said he wanted to help the American public to better understand the “invisible wounds” still inflicting him and thousands of others.

“Only those closest to me can see the scars,” Carter said, reading his statement. He said Americans should realize that those suffering from post-traumatic stress syndrome “are not damaged, they are just burdened by living when others are not.”

Obama praised Carter for talking openly about the disorder for some time. Obama said that Carter, like many veterans, “at first resisted seeking help,” but later accepted counseling.

“The pain of that day…may never go away,” Obama said, including flash-backs and nightmares. But he praised Carter for seeking help and pushing back, and for acknowledging his struggle publicly and helping other troops with their recovery.

The battle, one of the fiercest of the war in Afghanistan, occurred while Carter was stationed at Command Outpost Keating in the eastern part of the country. The roughly 53 U.S. troops at the outpost were at first overpowered by 300 or more Taliban fighters. But despite overwhelming numerical odds and “blizzards of bullets and steel,” Carter and his fellow soldiers “pushed the enemy back. The soldiers retook their camp.”

In February, Obama bestowed the Medal of Honor on another survivor of that firefight, former Staff Sgt. Clinton Romesha. It was the first time since the Vietnam War that two living soldiers of the same battle were presented with the Medal of Honor.