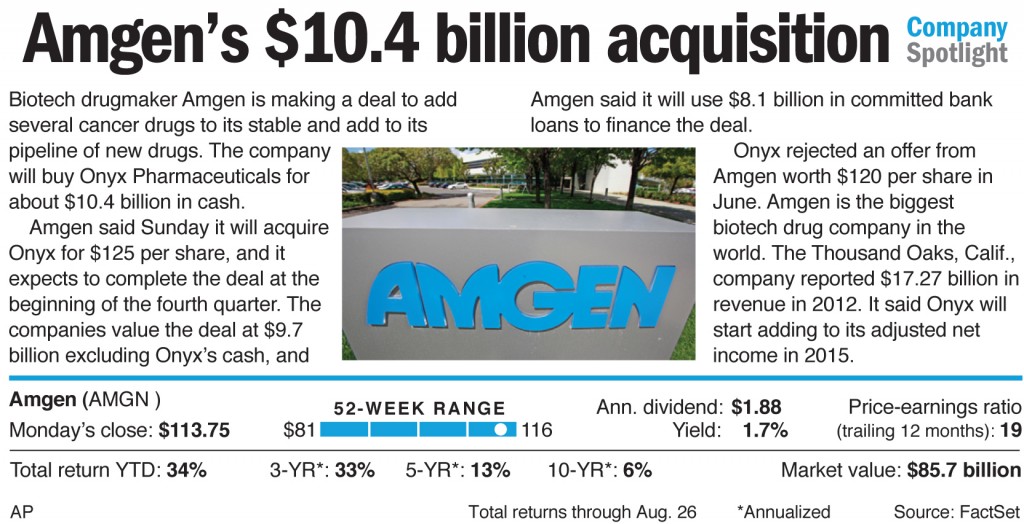 After being spurned two months ago, biotech giant Amgen Inc. said it has reached a $10.4 billion deal for Onyx Pharmaceuticals Inc., which has developed a promising drug to fight blood cancer.

Amgen, based in Thousand Oaks, Calif., will pay $125 per share for the outstanding shares of Onyx, the two companies said Sunday.

In June, Amgen made an unsolicited offer of $120 a share for Onyx, a South San Francisco company prized for its cancer drug, Kyprolis. Onyx rejected Amgen’s initial proposal, and started fielding offers from other big drug companies.

The all-cash deal represents a 44 percent premium over Onyx’s closing price of $86.82 on June 28, before Amgen’s initial proposal became public.

Like many of its rivals, Amgen has been looking for promising new drugs that could become billion-dollar blockbusters, to compensate for slower sales on some of its older products. Sales of Epogen, Amgen’s main anemia drug for dialysis patients, fell 4 percent in the second quarter compared with a year ago.

Amgen has said it’s optimistic about many of its drugs that are in the final phases of clinical testing. But the Onyx deal could give it a leg up on competitors and help speed the development of certain cancer therapies, analysts say.

The acquisition marks the first major deal at Amgen under the helm of Robert A. Bradway, who took over as the company’s chief executive in May 2012 and added the role of chairman this year. Before joining Amgen in 2006, Bradway was a longtime health care investment banker at Morgan Stanley.

“We believe that Amgen is strongly positioned to realize the full potential of Onyx’s portfolio and pipeline for the benefit of physicians and patients,” Bradway said. “Amgen has a unique opportunity to add value to Kyprolis, a product which is at an early and promising stage of its launch.”

Kyprolis has been approved by the U.S. Food and Drug Administration for multiple-myeloma patients who have received two other prior treatments. The drug is undergoing clinical trials in Europe as Onyx tries to win broader marketing approval.

Amgen’s top-selling products include arthritis medication Enbrel, osteoporosis drug Prolia and anemia medicines Aranesp and Epogen. The company had annual revenue of $17.3 billion in 2012, and net income of $4.3 billion.

Amgen said it expects the Onyx deal to close later this year, subject to regulatory approvals.