Regional For a Change, NY Gets Some Presidential Face Time
Regional 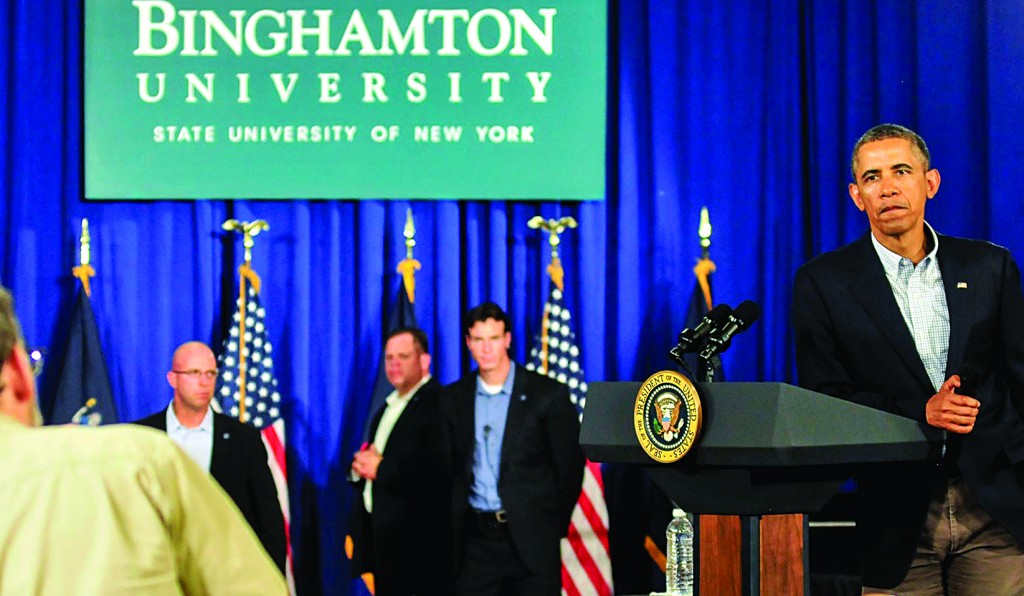 It’s the curse — or maybe the blessing — of living in a place that doesn’t make or break presidential elections: The president and those running for the job just don’t come around very often.

So President Barack Obama’s two-day bus tour this week through swaths of western and central New York, a state that reliably backs Democrats in presidential elections, set the region abuzz.

Cheering crowds and curious onlookers lined the streets hoping for a glimpse of the president through the tinted windows of his armored bus. Residents gathered at local restaurants and other hot spots on the off chance Obama might drop by (in nearly every instance, they left disappointed). And the newspaper in the small city of Auburn, N.Y., deployed nearly its entire staff of 12 to cover the president’s visit — even though his only events in town were a night’s sleep at the Holiday Inn and a morning workout at the local YMCA.

The scenes were a reminder that despite the nation’s divided politics and Obama’s own faded star-power, the office of the president is still revered by many Americans — or, at the very least, generates interest.

Jeremy Boyer, the executive editor of The Citizen newspaper in Auburn, said many of the locals who gathered around town were there to see the spectacle: the lengthy motorcade, the imposing Secret Service detail and “certainly the way they come in and just take over your city,” Boyer said.

“Some of it is Obama,” he added. “It’s almost like because he’s the president, he doesn’t seem real to you.”

Obama has frequently visited New York City, a fundraising hub for politicians. But he has rarely traveled elsewhere in the Empire State. His trip this week underscored that second-term presidents no longer need to plan their travel itineraries around states that could go either way in elections.

Bus tours have long been standard fare in presidential campaigns. But Obama has occasionally hit the open road outside of the campaign cycles, boarding his black Secret Service-approved motor coach in search of an escape from the insular world of Washington and a way to reconnect with the American people.

But the presidential security apparatus means some of that connection happens from a distance as the motorcade speeds by. A woman on the sidewalk in Seneca Falls held up a small homemade sign that read “Thank You For Health Care” and told of her husband’s recent stroke.

The president did get some in-person time with the surprised lunchtime crowd at a Rochester restaurant recommended to him by Sen. Chuck Schumer (D-N.Y.), and with the soccer teams at Tully Central High School, where he dropped by morning practice.

Of course, there were plenty of Obama detractors along the motorcade route, too, as well as those pushing policy positions.

As the president’s motorcade pulled into Binghamton University on Friday for a town hall-style meeting, hundreds of protesters gathered outside to urge Obama to oppose fracking, a natural gas drilling process. One woman held a sign that read: “I worked for you. Now please work for me. No fracking.”

Fracking protesters were joined by about a dozen people calling on Obama to cut U.S. aid to Egypt.