General Nasdaq Trading Halts for 3 Hours Due to Glitch 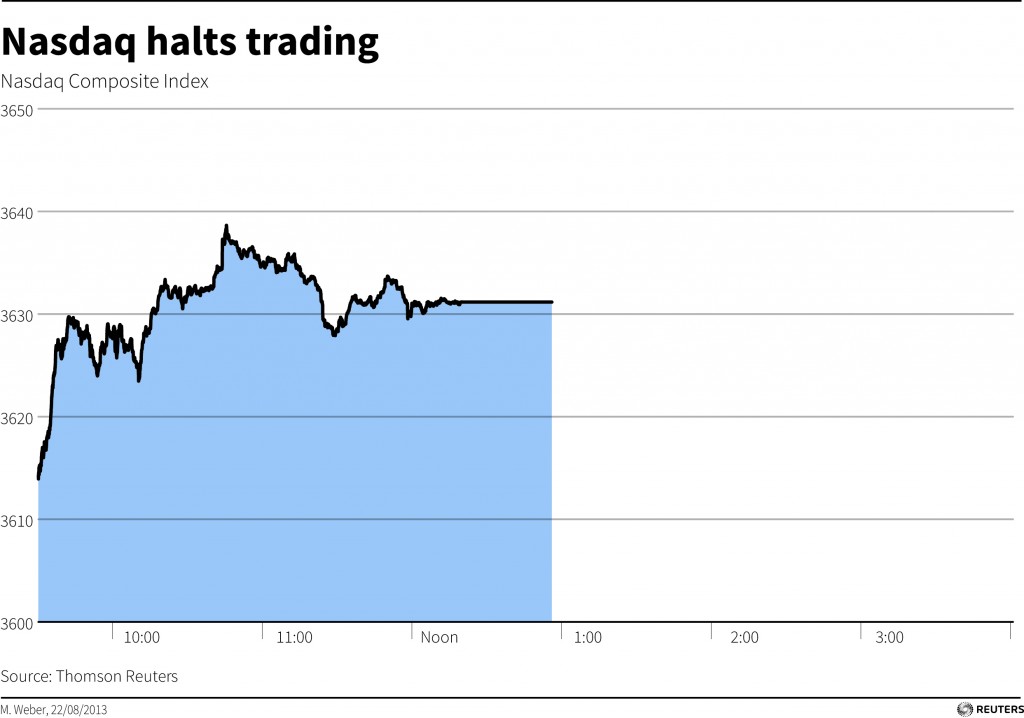 Trading on the Nasdaq stock exchange halted for three hours Thursday, renewing concerns about the pitfalls of computer-driven trading.

The outage disrupted what had otherwise been a quiet summer day on Wall Street, and sent brokers and traders scurrying to figure out what went wrong. It was the latest in a growing list of snafus to hit financial markets, though hardly as stunning as the “flash crash” that set off a sudden stock-market plunge in May 2010.

“The market has gotten quite complex, and needlessly so,” said Sal Arnuk, co-founder of the brokerage Themis Trading.

The Nasdaq, a stock exchange dominated by the biggest names in technology, sent out an alert shortly after 12 p.m. EDT, saying it was stopping trading because of problems with its system for disseminating prices. The Nasdaq composite index spent much of the afternoon stuck at 3,631.17.

Nasdaq said that it won’t cancel any open orders, but that customers could cancel orders if they wanted to.

The Nasdaq shutdown appeared to occur in an orderly fashion and didn’t upset other parts of the stock market.

Government agencies, the Treasury Department and the White House released statements saying they were following the disruption.

“We are monitoring the situation and are in close contact with the exchanges,” said John Nester, a spokesman for the Securities and Exchange Commission.

It was another sign that the days of stock brokers in colorful jackets, roaming the floor of the stock exchange, have faded away. Now, powerful computer programs dominate trading by sifting through reams of data and executing trades in fractions of a second. That makes trading faster and, arguably, more efficient. But it also introduces more possibilities for errors that can jolt the entire market.

Last year, BATS Global Markets tried to go public on its own exchange, but had to back out after a computer error sent the stock price plunging to just pennies. Facebook’s public offering last spring was also error-riddled, as technical problems kept many investors from knowing if their trades had gone through, and left some holding unwanted shares. And in April, the Chicago Board Options Exchange shut down for a morning because of a software problem.

Then there’s the 2010 “flash crash,” where the Dow Jones Industrial Average fell hundreds of points in minutes, before eventually closing 348 points lower. It was one of the first major blips that brought the potential dangers of computer-driven, high-frequency trading into the public sphere.

One of the lessons from the “flash crash” is that it’s better to stop trading and re-open a market in a fair and orderly manner, than to have messy trading, said James Angel, a finance professor at Georgetown University who specializes in the structure and regulation of financial markets.

“I think people are so used to the fact that every once in a while the power goes out and a computer crashes,” Angel said. “As long as the trading is fair and orderly, I don’t think that’s going to deter people from investing.”

Trading glitches can also change fortunes. A technical bug spelled the end for Knight Capital as a stand-alone company, and marred its long-held reputation as a stellar risk manager, after it sent the stocks of dozens of companies swinging wildly on Aug. 1 last year.

It also left Knight, which takes orders from big brokers like TD Ameritrade and E-Trade, on the hook for many of the stocks that its computers accidentally ordered. Knight teetered near bankruptcy, and this summer was taken over by the high-speed trading firm Getco.