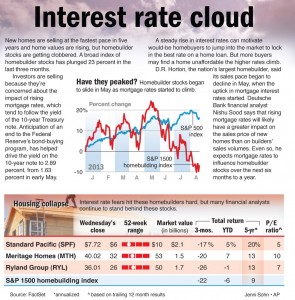 For the first time since 2009, previously occupied U.S. homes are selling at a pace associated with a healthy market.

Sales jumped 6.5 percent in July to a seasonally adjusted annual rate of 5.4 million, the National Association of Realtors said Wednesday. Over the past 12 months, sales have surged 17.2 percent. The trend shows that housing remains a driving force for the economy even as mortgage rates have risen from record lows.

Buyers have been purchasing previously occupied homes at an annual pace above 5 million for three straight months. The last time that happened was in 2007. Sales are far above the 3.45 million pace of July 2010, the low point after the housing bubble burst. Analysts generally think a healthy sales pace is roughly between 5 and 5.5 million.

Buyers last month weren’t dissuaded by higher long-term mortgage rates, which have jumped, on average, a full percentage point since early May. The higher rates might have led some potential buyers to buy in July out of fear that rates will rise further.

July’s report captures completed sales, which typically reflect mortgage rates that were locked in a month or two earlier. A fuller effect of higher mortgage rates might not be clear until August home sales are reported next month.

Sales could slow later this year, especially if the Federal Reserve scales back its bond purchases. The Fed’s bond purchases have kept long-term interest rates, including mortgage rates, historically low.

For now, the average rate on the 30-year fixed mortgage remains low by historical standards. It was 4.4 percent last week.

“The one-percentage-point jump in mortgage rates in the past year doesn’t seem to have slowed home sales,” said Sal Guatieri, senior economist at BMO Capital Markets. “The jump in rates might have pulled forward some purchases, so a few more months of data are likely needed to wave the all-clear flag.”

Steady hiring and low mortgage rates have helped the housing market recover over the last year. Banks have also begun easing tight credit standards, which have made it hard for many people to get mortgages.

The number of available homes is also rising slowly and should support more sales. The supply of unsold homes rose 5.6 percent in July to 2.28 million. That’s still 5 percent below last year’s figure. A limited supply has pushed up prices nationwide.

There were other positive signals in Wednesday’s report. The proportion of distressed sales – including foreclosures – stayed at 15 percent, the lowest since the Realtors began tracking the figure in October 2008.

And investors made up just 16 percent of purchases, down from a recent peak of 22 percent in February. The smaller proportion of investors suggests the market is slowly returning to normal.

One troubling sign: First-time homebuyers aren’t returning to the market. They usually help drive rebounds in home sales. But they made up only 29 percent of sales in July, below the 40 percent level consistent with a healthy market.

Sales of new homes have also been surging. They rose in June at their fastest pace in five years, to a seasonally adjusted annual rate of 497,000. Though new-home sales remain below the 700,000-pace consistent with healthy markets, they’ve risen 38 percent in the past 12 months.

On Wednesday, Toll Brothers Inc., the luxury homebuilder, issued an upbeat outlook. The company said its signed contracts in the quarter that just ended climbed 47 percent, and the average price of homes it delivered rose 13 percent.

Stocks of Toll and other builders have generally fallen since early spring, on fears that higher mortgage rates will cool home purchases later this year.