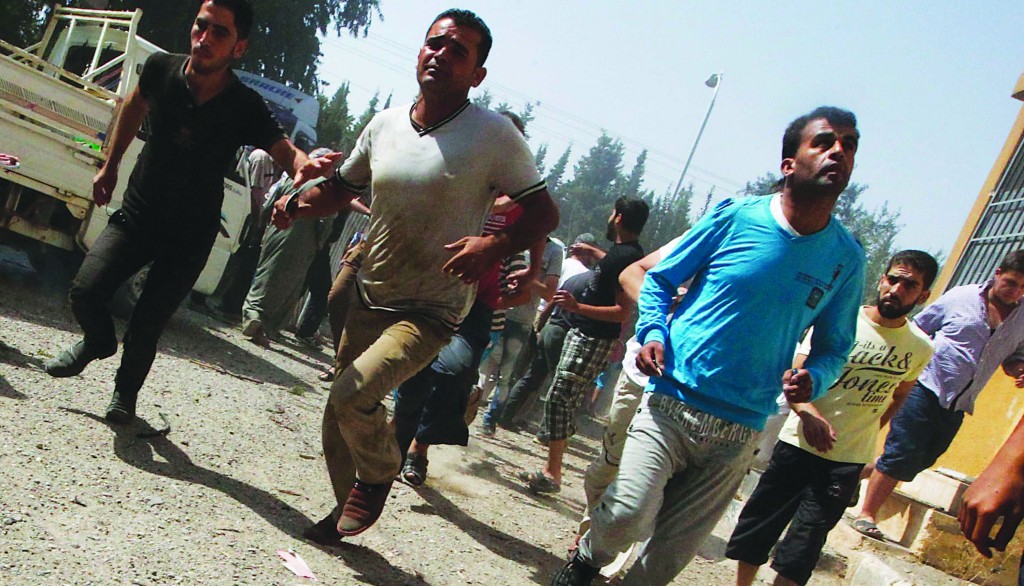 With the dead estimated at between 500 and 1,300, what would be the world’s most lethal chemical weapons attack since the 1980s prompted an emergency meeting of the U.N. Security Council in New York.

While U.N. Secretary General Ban Ki-moon expressed shock, immediate international action is likely to be limited, with the divisions among major powers that have crippled efforts to quell two and a half years of civil war still much in evidence.

Russia hastened to back up denials from the administration of President Bashar al-Assad by saying it looked like a rebel “provocation” to discredit him.

Britain voiced the opposite view: “I hope this will wake up some who have supported the Assad regime to realize its murderous and barbaric nature,” Foreign Secretary William Hague said on a visit to Paris, London’s ally against Assad.

France, Britain, the United States and others called for an immediate on-site investigation by U.N. chemical weapons inspectors who arrived in the Syrian capital only this week. Moscow, urging an “objective” inquiry, said the very presence of that team suggested government forces were not to blame.

President Obama has made the use of chemical weapons by Assad’s forces a “red line” that already in June triggered more U.S. aid to the rebels. But previous, smaller and disputed cases of their deployment have not brought the all-out military intervention that rebel leaders have sought to break a stalemate.

If confirmed, a major gas attack could increase pressure on Obama to do more to support rebels whose links to militant Islam have helped dampen Western enthusiasm for their cause.

The Security Council, where Russia has vetoed previous Western efforts to impose U.N. penalties on Assad, had a closed-door meeting but is not expected to take decisive action, with the big powers still at loggerheads and cautiously seeking clarity over the incident.

Images, including some by freelance photographers supplied to Reuters and other news agencies, showed scores of bodies laid on the floor of a clinic with no visible signs of injuries.

The United States and others said it had no independent confirmation that chemical weapons had been used. U.N. chief Ban said the head of the organization’s inspection team in Damascus was already discussing the latest claims with the government.

Opposition activists variously cited death tolls ranging from about 500 to, by one account, some 1,300 after shells and rockets fell around 3 a.m. In 1988, 3,000 to 5,000 Iraqi Kurds were gassed by Saddam Hussein’s forces at Halabja.

One man who said he had retrieved victims in the suburb of Erbin told Reuters: “We would go into a house and everything was in its place. Every person was in their place. They were lying where they had been. They looked like they were asleep.

“But they were dead.”

When shelling hit her town of Mouadamiya, southwest of the capital, Farah al-Shami ignored rumors online that rockets were loaded with chemical agents. She thought her district was too close to a military encampment to be affected.

“And at the same time the U.N. was here. It seemed impossible. But then I started to feel dizzy. I was choking and my eyes were burning,” the 23-year-old told Reuters over Skype.

“I rushed to the field clinic nearby. Luckily no one in my family was hurt, but I saw entire families on the floor.”

Doctors interviewed described symptoms they believe point to sarin gas, one of the agents Western powers accuse Damascus of having in an undeclared chemical weapons stockpile.

“The United States is deeply concerned by reports that hundreds of Syrian civilians have been killed in an attack by Syrian government forces, including by the use of chemical weapons,” White House spokesman Josh Earnest said.

He added that “if the Syrian government has nothing to hide,” it would facilitate the work of the U.N. inspectors.

Syrian Information Minister Omran Zoabi said the allegations were “illogical and fabricated.” Assad’s officials have said they would never use poison gas against Syrians. The United States and European allies believe Assad’s forces have used small amounts of sarin before, hence the current U.N. visit.