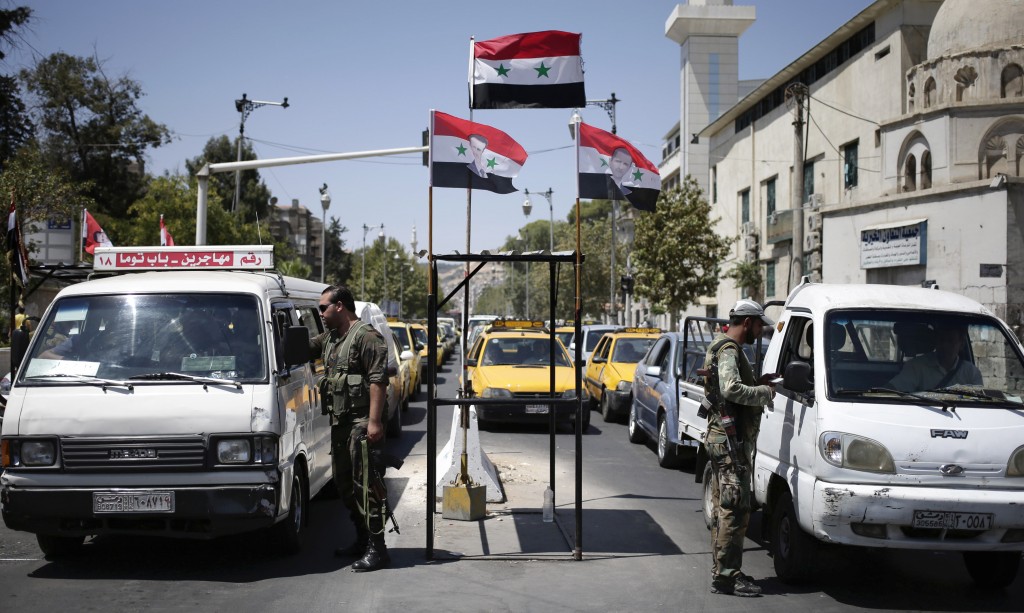 Syrian anti-government activists accused the regime of carrying out a toxic gas attack that killed at least 100 people, including many children, during intense artillery and rocket barrages Wednesday on the eastern suburbs of Damascus, part of a fierce government offensive in the area.

The attack coincided with the visit by a 20-member U.N. chemical weapons team to Syria to investigate three sites where chemical weapons attacks allegedly occurred over the past year. Their presence raises questions about why the regime, which called the claims of the attack Wednesday “absolutely baseless,” would employ chemical agents at this time.

Shocking images emerged from the purported attack, showing pale, lifeless bodies of children lined up on floors of makeshift hospitals and others with oxygen masks on their faces as they were attended to by paramedics. There was no visible blood or wounds on their skin.

The reported death toll Wednesday would make it the single deadliest alleged chemical attack in Syria’s civil war. There were conflicting reports, however, as to what exactly transpired.

France’s president demanded the U.N. be granted access to the site of Wednesday’s alleged attack, while Britain’s foreign secretary said if the claims are verified it would mark “a shocking escalation of the use of chemical weapons in Syria.”

The Egypt-based Arab League condemned the “horrific attack” against civilians and called for an investigation.

The heavy shelling earlier in the day pounded the capital’s eastern suburbs of Zamalka, Arbeen and Ein Tarma, according to the Britain-based Syrian Observatory for Human Rights monitoring group. The intensive bombardment as well as the sound of fighter jets could be heard by residents of the Syrian capital throughout the night and early Wednesday, and gray smoke hung over towns in the eastern suburbs.

Observatory director Rami Abdul-Rahman said the activists in the area said “poisonous gas” was fired in rockets as well as from the air in the attack. He added that he has documented at least 100 deaths, but said it was no clear whether the victims died from shelling or toxic gas.

Another group, the Local Coordination Committees, said hundreds of people were killed or injured in the shelling and the Syrian National Coalition, Syria’s main opposition group in exile, put the number at 1,300. The group said it was basing its claim on accounts and photographs by activists on the ground.

Such different figures from activists groups are common in the immediate aftermaths of attacks in Syria, where the government restricts foreign and domestic reporting.

Syria is said to have one of the world’s largest stockpiles of chemical weapons, including mustard gas and the nerve agent sarin. The government refuses to confirm it possesses such weapons.

In June, the U.S. said it had conclusive evidence that Assad’s regime used chemical weapons against opposition forces. That crossed what President Barack Obama called a “red line,” prompting a U.S. decision to begin arming rebel groups, although that has not happened yet.

An opposition activist and a pharmacist in the town of Arbeen who identified himself as Abu Ahmad, which is not his real name, said he attended to dozens of injured people in a field hospital after the shelling on Zamalka and Ein Tarma early Wednesday, and said many were moved to Arbeen.

He claimed that bodies of 63 victims had indications of a chemical weapons attack but he could not confirm this.

“Their mouths were foaming, their pupils were constricted, and those who were brought in while still alive could not draw their breaths and died subsequently,” he told The Associated Press via Skype. “The skin around their eyes and noses was greyish.”

Ahmad said he based his belief that the symptoms could indicate a chemical weapon attack on his previous experience. Two months ago he had attended to two victims brought in from Jobar, a neighborhood in Damascus, who had the same symptoms and were believed to have been injured in a chemical attack.

“They are an attempt to divert the U.N. commission on chemical weapons from carrying out its mission,” the state-run SANA news agency said, quoting an unnamed government official, as is its standard practice.

The head of the U.N. team in Syria to investigate previous claims of alleged chemical attacks said he wants to look into the latest claims.

Speaking to Swedish broadcaster SVT, Ake Sellstrom, who is Swedish,  said the high numbers of killed and wounded being reported “sound suspicious.”

He said a formal request from a member state would have to go through the U.N. channels and Syria would need to agree – and there is no guarantee that it would.

France said they will ask the United Nations to visit the site of Wednesday’s alleged attack.

Hollande would ask the U.N. to go to the site “to shed full light” on the allegations.

The Syrian government has long denied claims by the opposition on chemical weapons use, saying rebels fighting to overthrow President Bashar Assad’s government have used such weapons.

Following Wednesday’s reports, the Observatory called upon the U.N. team in Syria and all international organizations “to visit the stricken areas and to guarantee that medical and relief supplies reach the people as soon as possible.” It also called for an investigation into the attack.

Mohammed Saeed, an activist in the area, told The Associated Press via Skype that hundreds of dead and injured people were rushed to six makeshift hospitals in the eastern suburbs of Damascus.

“This is a massacre by chemical weapons,” said Saeed. “The visit by the U.N. team is a joke … Bashar is using the weapons and telling the world that he does not care.”

The photos and videos distributed by activists to support their claims were consistent with AP reporting of shelling in the area, though it was not known what the victims died from.

Sellstrom’s team of U.N. experts is meant to probe three sites: the village of Khan al-Assal just west of the embattled northern city of Aleppo and two other locations, which are being kept secret for security reasons.

Wednesday’s claim of the chemical attack, if confirmed, would be the most serious since the March 19 incident in Khan al-Assal when at least 30 people were killed. Assad’s regime and the rebels have blamed each other for that attack.

Unrest in Syria began in March 2011 and later exploded into a civil war. More than 100,000 people have been killed in the conflict.