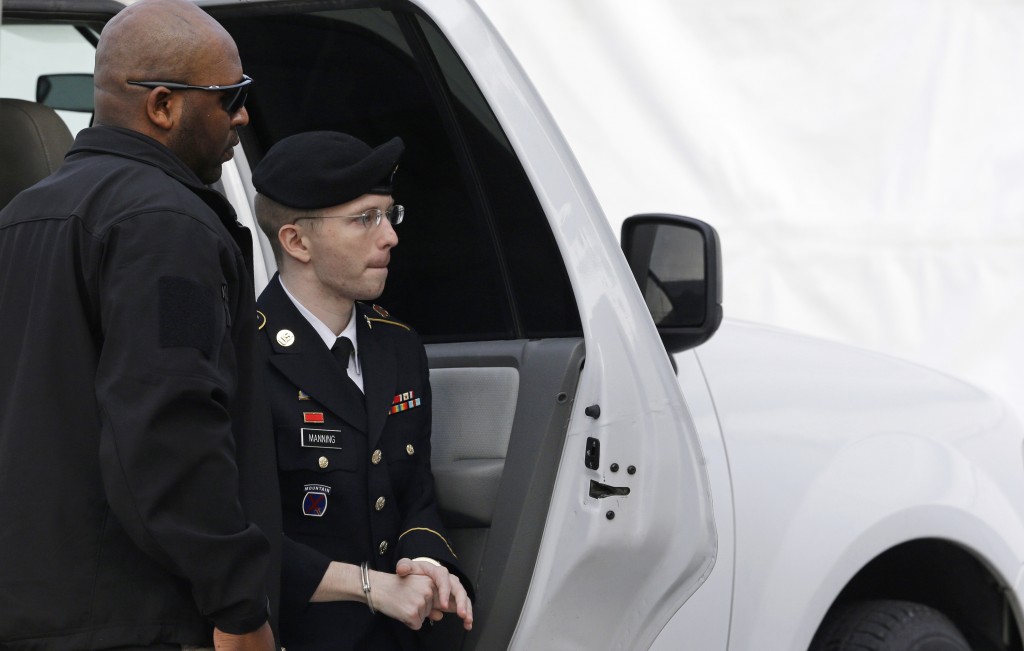 Army Pfc. Bradley Manning was sentenced Wednesday to 35 years in prison for giving hundreds of thousands of secret military and diplomatic documents to WikiLeaks in one of the nation’s biggest leak cases since the Pentagon Papers more than a generation ago.

In a brief hearing, military judge Col. Denise Lind didn’t offer any explanation for the sentence she gave Manning, 25. The former intelligence analyst was found guilty last month of 20 crimes, including six violations of the Espionage Act, as part of the Obama administration’s unprecedented crackdown on media leaks.

But the judge acquitted him of the most serious charge, aiding the enemy, an offense that could have meant life in prison without parole.

Manning could have gotten 90 years behind bars. Prosecutors asked for at least 60 years as a warning to other soldiers, while Manning’s lawyer suggested he get no more than 25, because some of the documents he leaked will be declassified by then.

The native of Crescent, Okla., digitally copied and released more than 700,000 documents, including Iraq and Afghanistan battlefield reports and State Department cables, while working in 2010 in Iraq.

He also leaked video footage of a 2007 Apache helicopter attack in Baghdad that mistakenly killed at least nine people, including a Reuters photographer.

At his trial, Manning said he gave the material to the secrets-spilling website WikiLeaks to expose the U.S. military’s “bloodlust” and generate debate over the wars and U.S. policy.

During the sentencing phase, he apologized for the damage he caused, saying, “When I made these decisions, I believed I was going to help people, not hurt people.”

Defense attorney David Coombs told the judge that Manning had been full of youthful idealism.

“He had pure intentions at the time that he committed his offenses,” Coombs said. “At that time, Pfc. Manning really, truly, genuinely believed that this information could make a difference.”

Prosecutors did not present any evidence in open court that anyone was physically harmed as a direct result of Manning’s actions. But they showed that al-Qaida used material from the helicopter attack in a propaganda video and that Osama bin Laden presumably read some of the leaked documents, which were published online by WikiLeaks. Some of the material was found in bin Laden’s compound when it was raided.

Also, government witnesses testified the leaks endangered U.S. intelligence sources, some of whom were moved to other countries for their safety. And several ambassadors were recalled, expelled or reassigned because of embarrassing disclosures.

Prosecutors called Manning an anarchist and an attention-seeking traitor, while supporters have hailed him as a whistleblower and likened him to Daniel Ellsberg, the defense analyst who in 1971 leaked the Pentagon Papers, a secret history of U.S. involvement in Vietnam, to The New York Times and other newspapers.

That case touched off an epic clash between the Nixon administration and the press and led to a landmark Supreme Court ruling on the First Amendment.

The Obama administration has charged seven people with leaking to the news media, while only three people were prosecuted in all previous administrations combined.

Among those seven is Snowden, whose leak has triggered a fierce debate over security vs. privacy and strained U.S. relations with Russia, which is harboring him despite demands he be returned to this country to face charges.

In addition, the Justice Department has obtained the records of phones used by Associated Press journalists and emails of a Fox News reporter.

Also, a federal appeals court ruled recently that New York Times reporter James Risen cannot shield his source when he testifies at the trial of a former CIA officer accused of leaking information about a secret operation.

A lawyer for WikiLeaks founder Julian Assange, Michael Ratner, has suggested Manning’s conviction could make it easier for federal prosecutors to get an indictment against Assange as a co-conspirator.

But other legal experts said the Australian’s status as a foreigner and a publisher make it unlikely he will be indicted.