Rubio Is Talking Less About Immigration These Days

On a recent swing through the most conservative parts of his state, Sen. Marco Rubio (R-FL) told a packed banquet hall at the St. Andrews Bay Yacht Club that major policy issues were threatening the American dream: onerous taxes, burdensome regulations —and, above all, President Obama’s health care law.

But all Doc Washburn wanted to know about was immigration.

The local radio talk-show host asked the Republican senator why he had worked with Democrats on legislation that would give the estimated 11 million immigrants here illegally an eventual path to citizenship.

“We know you, and we’ve always loved you,” Washburn said, “and yet you’re pushing this and it’s a real problem for us.”

The exchange — and Rubio’s reluctance to raise the issue after spending months advocating for comprehensive immigration reform — underscore why the potential presidential candidate has undertaken a sort of image-rehabilitation tour, promoting his conservative bona fides to crowds in Florida’s most Republican bastions. 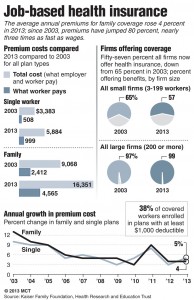 Once embraced by the tea party, Rubio’s name can now elicit boos and catcalls at rallies. And since he began championing immigration changes, his standing has slipped in some polls.

The senator acknowledges the fallout. He told Republicans in Panama City, “Politically, it has not been a pleasant experience, to say the least.” But his aides insist that his pivot to health care is driven by policy, not politics, that he’s simply giving the U.S. House its own space to tackle immigration.

On a six-city, three-day swing through North Florida last week, Rubio emphasized his opposition to funding the health care law and barely mentioned immigration, the issue most closely associated with him. In a 35-minute speech to the Rotary Club of Jacksonville, he devoted just one minute to the reform legislation he helped shepherd through the Senate. In private, he discussed the issue in a series of meetings with conservative activists upset by his advocacy. He also held a series of public roundtables with business leaders, redirecting attention to his campaign to cut off funding for Obama’s health care law. 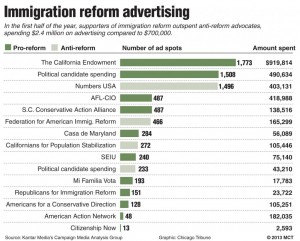 The tour came as two of Rubio’s fellow senators — and potential presidential rivals — appear to be building strength with conservatives. Sens. Ted Cruz of Texas and Rand Paul of Kentucky also are pushing to defund the health care law, promoting their efforts among activists in states that will help decide the Republican nomination in 2016.

Political and budget analysts say the push to neutralize “Obamacare” has little chance of success: Leading congressional Republicans have openly rejected the strategy, fearing a repeat of 1995, when the GOP forced a government shutdown over spending cuts and resuscitated President Bill Clinton’s political career. Moreover, most of the health care law’s funding is deemed mandatory, falling outside Congress’ annual spending legislation.

Nevertheless, three years after its passage, the health care law remains a potent political issue. Polls show a majority of Americans — and most Republicans — oppose the law.

That helps explain why Rubio drew big applause for his pledge to reject any budget that funds “Obamacare” as he traveled across the Florida Panhandle, a stretch of plantations, farms and beach towns dotted with billboards bearing conservative messages and with homemade anti-Obama signs.

Republican opposition to the health care law was visceral.

Some who were angry with Rubio over immigration said they were heartened by his campaign against the health care law.

“He may win us back with that,” said Glen Leirer, a retired computer salesman in Panama City, “because that’s probably the worst thing.”

Before leaving Washington for the August recess, Rubio chastised his fellow Republicans on the Senate floor. “Don’t come here and say, ‘I’m against Obamacare’ if you’re willing to vote for a budget that funds it,” he said. “If you pay for it, you own it.”

Rubio says his renewed drive against the health care law has been driven partly by the administration’s decisions to delay some key provisions, including a requirement for larger employers to offer health insurance to full-time employees. Those moves, he said, amount to an “admission this law is not ready for prime time.”

He also cites the concerns of labor unions, which have asked Congress to change a provision that they say gives employers an incentive to cut workers’ hours in order to avoid a health coverage requirement.

Freddie Wehbe, who employs 200 workers at Domino’s Pizza franchises in Gainesville, was among several local business owners who told Rubio that they’re waiting to hire workers or delaying expansion because of uncertainty about the law’s impact on their health insurance costs.

At each stop, Rubio found fervor generally reserved for election years. But, except for a brief mention in Jacksonville, he addressed immigration only when asked about it.

During an interview in Tallahassee, Rubio tried a new approach. He said that if Congress doesn’t pass a reform bill, Obama may be “tempted” to act on his own to legalize the millions of immigrants already here illegally.

“A year from now we could find ourselves with all 11 million people here legally under an executive order from the president, but no E-Verify, no more border security, no more border agents — none of the other reforms that we desperately need,” Rubio said, referring to an electronic system for employers to check their workers’ legal status.

The show’s host thanked Rubio for his response. But he said the listeners emailing him were not impressed.

This article appeared in print on page 10 of the August 21st, 2013 edition of Hamodia.