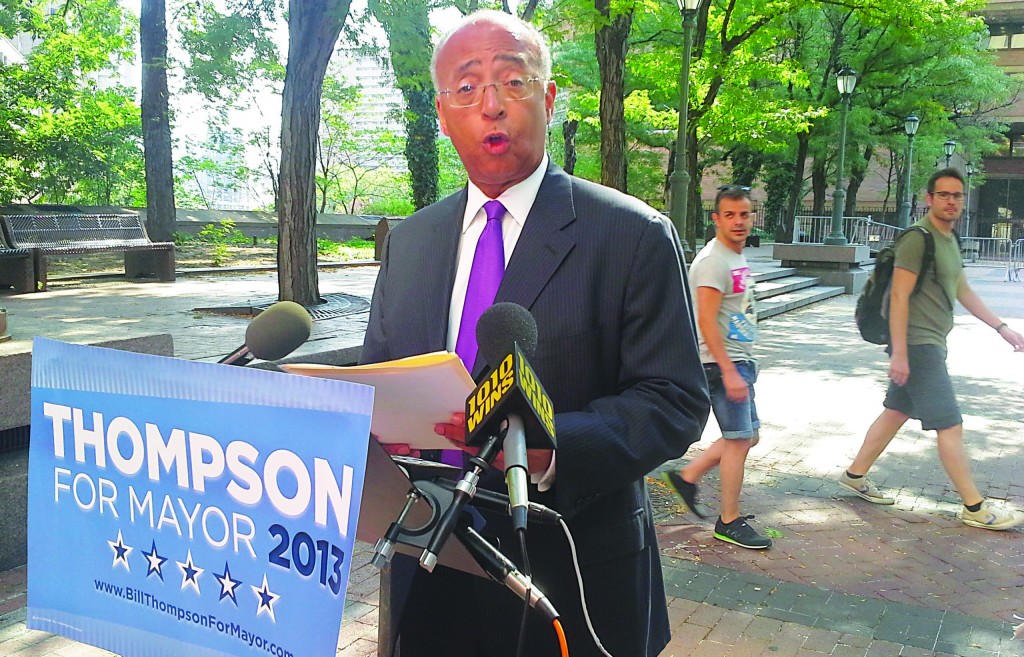 Mayoral candidate Bill Thompson on Tuesday unveiled a plan to make police officers more accountable to the people they question under their stop-question-and-frisk policy by forcing officers to issue tickets explaining why their stops were made. Specific causes, such as leaving a known drug hotspot or having a gun-like bulge in a pocket, would need to be cited.

Currently, police use the stop-and-frisk policy to question people they deem suspicious and can make stops based on the general cause of “furtive movement.” Officers aren’t responsible for explaining the stops, even if they don’t lead to arrests.

Thompson said at a press conference outside New York Police Department headquarters that stop-and-frisk “should only be used when there’s legitimate suspicion that a crime is likely being committed or when an officer believes that a suspect is armed and dangerous.”

Thompson demanded that his rival, Public Advocate Bill de Blasio, take down a commercial stating de Blasio is the “only” candidate who will “end a stop-and-frisk era that targets minorities.”

“I think that if you look at Bill saying he’s the only one to end stop-and-frisk, that’s just not true,” Thompson said. “…I’m out here talking about that today, and I think that, when you look at the ad, which The New York Times said is not true. I think Bill needs to take that ad down.”

While de Blasio supports ending the practice, Thompson wants to end what he calls the “abuse” of it. In his literature, Thompson says he is the “only” candidate to provide an alternative to the tactic.

Nobel laureate Joseph Stiglitz, an economist who worked in the Clinton administration, announced Tuesday his endorsement of Bill de Blasio for mayor, citing his plan to fund universal pre-K and expand after-school programs by increasing taxes on the wealthy.

“As the U.S. faces increasing gridlock at the national level, as our country’s politics becomes increasingly dysfunctional, it is in our cities where things are going to happen — where they must happen if there is going to be shared prosperity within our country,” Stiglitz said in explaining his foray into a local race. “… New York City has a role to play as a model for the country — and the world.”

De Blasio, the Wall Street Journal reported, was greeting voters outside a Manhattan subway station when Stiglitz stopped by for what turned out to be a long chat. That resulted in the economist’s endorsing him, saying that de Blasio’s agenda shows “we can do so much better than we have been.”

Republican mayoral candidate Joe Lhota says that the recent bust of the largest gun-running ring in New York City history proves that the stop-question-and-frisk police tactic works and should be continued in a new administration.

The gun runners, whose arrest was highlighted at a One Police Plaza press conference attended by Mayor Michael Bloomberg and police Commissioner Raymond Kelly on Monday, were caught on tape discussing the need to keep the illegal weapons outside of New York City over fears of being stopped and frisked.

“I can’t take them … to my house … I’m in Brownsville … We got like, whatchamacallit, stop-and-frisk,” one of the alleged gunrunners was heard saying.

“The tapes revealing these criminals’ fears about stop-and-frisk is a sobering account of how this policing tactic has helped to save thousands of lives,” said Lhota, the Republican frontrunner.

“The City Council is about to put handcuffs on our police, instead of the criminals,” Catsimatidis said, referring to Thursday’s vote to override a mayoral veto of two bills. One piece of legislation makes it easier to sue over racial profiling if someone is stopped and frisked, and another sets up a police oversight inspector general.

“The professional politicians in the City Council should be ashamed of themselves. They must be held responsible for the criminal acts that will take place due to this looney legislation,” he said. “All the Community ‘Unsafety’ Act will do is make our city less safe and roll back the progress that Commissioner Kelly, the NYPD and all our law enforcement community have made over the past 11 years.”

Pataki praised Kelly for lowering crime rates, and said that Catsimatidis will continue that record by keeping the popular commissioner in office if he is elected.

“There is only one candidate with the guts to defend stop-and-frisk and stand up and call for the man who has kept our city safe through these policies to continue as police commissioner,” the three-term former governor said.

Leading mayoral candidate Bill de Blasio had to take time off the campaign trail to go to court Tuesday, appearing before a judge over his arrest last month at a protest of a hospital closure.

De Blasio, City Councilman Stephen Levin and about a dozen nurses and others all had their disorderly conduct cases put on track to be dismissed if they avoid rearrest for six months. It’s a common way for Manhattan courts to resolve such cases.

De Blasio, a Democrat who’s currently the city’s elected public advocate, and the others were arrested July 10 after they ignored a police officer’s order to stop blocking the entrance to a midtown Manhattan office of the State University of New York. They were protesting the university system’s plan to close Long Island College Hospital and sell its Brooklyn buildings.

“Civil disobedience is something you use when the normal governmental process isn’t functioning,” de Blasio said after his appearance at a Manhattan court, where he had gotten in line outside with others facing minor charges before court officers spotted him and brought him in.

Since the protest, de Blasio has secured a court order to keep the hospital operating.

De Blasio, who is positioning himself as the most progressive candidate in a crowded Democratic field, has been arrested at protests before, including at a 2003 demonstration over the closing of a Brooklyn firehouse. He was then a city councilman.

An Underdog Leaps to Front of Mayor’s Race

Bill de Blasio has gone from afterthought to front-runner with stunning speed.

The most liberal candidate in the New York City mayoral race, whose City Hall bid was floundering mere weeks ago, now enjoys a shocking perch atop the polls in the latest turn of the most unpredictable citywide campaign in decades.

And with the Democratic primary now less than a month away, de Blasio may have hit his stride at just the right time.

The city’s public advocate has been given a second look by an electorate that appears intrigued by his progressive policies. But with independent Mayor Michael Bloomberg’s impending departure after 12 years in office, it is clear that there is a wide-open race; the Democratic field alone has had three different leaders in as many weeks.

A Quinnipiac University poll this past week showed that de Blasio’s support had doubled in less than a month, pushing him from fourth to slightly ahead of the pack. A second poll released this week showed him in a dead heat with City Council Speaker Christine Quinn, with ex-comptroller Bill Thompson slightly behind.

De Blasio, 52, believes it was simply a matter of time before his message resonated with left-leaning voters in New York City,
where Democrats outnumber Republicans 6 to 1.

“It’s happening now because people are finally starting to focus on the race,” de Blasio said. “After 12 years of Mayor Bloomberg, people want a real change.”

It is rare to find a candidate who appears almost gleeful when proposing raising taxes, but de Blasio has happily made as the centerpiece of his campaign a proposal to raise taxes on the wealthy to pay for universal pre-kindergarten. He repeatedly brandishes the phrase “a tale of two cities” to rip the economic inequality between the rich and poor in the nation’s largest city.

“Race to City Hall 2013” is a daily Hamodia column focusing on the New York City mayoral race, ahead of the Democratic and Republican primaries on Sept. 10, a likely runoff on Oct. 1, and the general election on Nov. 5. It is culled from reports from The Associated Press, Politicker, the Daily News, City & State and others.