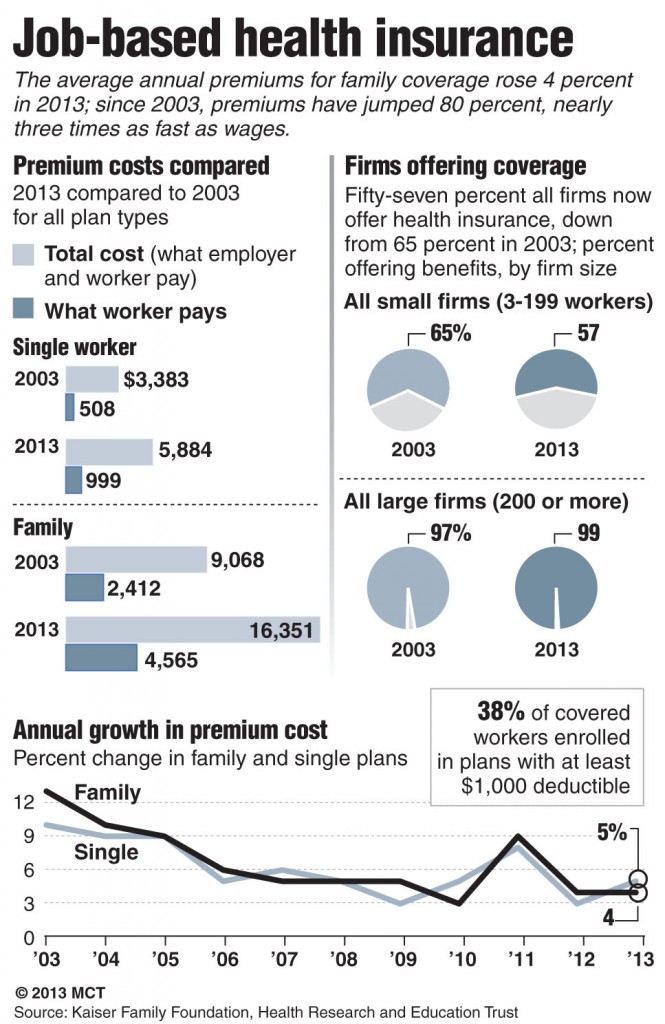 For the 14th straight year, the average cost of job-based family health insurance grew faster than overall inflation and employee wages, according to a nationwide survey of more than 2,000 businesses released on Tuesday.

Annual premiums for employer-sponsored coverage are averaging $16,351 in 2013, up 4 percent from last year, while the annual cost of individual coverage is averaging $5,884 this year, a 5 percent increase from 2012, according to data from the annual Employer Health Benefits Survey by the Kaiser Family Foundation and the Health Research & Educational Trust.

Both premium increases are a far cry from the double-digit rate hikes that dominated from 2000 to 2004. And they continue an eight-year period of mostly modest 4 percent to 6 percent annual increases, the survey reported.

The slower rate of growth means employers ­– who typically pay the bulk of employee health costs – are less likely to try to cut worker benefits in order to contain costs.

“We’re not seeing that,” said Drew Altman, president and CEO of Kaiser, a private, nonprofit health care research organization. “It’s not an environment where they should be looking to dramatically cut workers’ health benefits.”

In fact, employee wellness programs that promote and reward healthy behaviors have become the most popular cost-containment strategy for employers. Seventy-seven percent of firms offer at least one wellness program, the survey found.

The cost of job-based coverage has increased 80 percent overall in the last decade. That’s nearly three times faster than wages and inflation, which are up 31 percent and 27 percent, respectively, over the same period. That means the cost of health coverage continues to take a bigger bite out of most Americans’ household budget, even though costs are in a period of moderate growth.

“What workers are paying for health coverage still strikingly outstrips both the increase in their wages and inflation,” Altman said. “There’s still a sharp, sharp contrast.”

Fortunately, the share of health care premiums paid by covered workers has remained virtually unchanged over the last 10 years, even though the actual cost has grown steadily, survey data show. Individuals have contributed an average of 18 percent, or $999, toward their coverage in 2013, while families paid an average of 29 percent of their total annual premium, or about $4,565.

About 149 million Americans have job-based health coverage, and 57 percent of firms currently offer employee coverage. That’s down from 61 percent in 2012, but it’s not considered a statistically significant decline, according to the survey.

An average of 77 percent of workers are eligible for employee health coverage; of these workers, about 80 percent are enrolled in job-based coverage, the survey estimates. Overall, 62 percent of workers at companies that offer coverage have insurance through their employers.

The Affordable Care Act, which requires most Americans to have health insurance or pay a fine next year, is likely to increase the number of workers who get job-based coverage.

“This will be an important issue to watch next year, as employers will have more flexibility and could ask workers to pay more because of their lifestyles and health conditions,” said Kaiser vice president Gary Claxton.

Along with a slowdown in consumer spending for health care because of the economic recession, many feel provisions of the Affordable Care Act are helping to moderate premium growth. In particular, Altman cited the law’s so-called “80/20” rule, which penalizes insurers for spending less than 80 percent of premium revenue on medical care or quality improvements.

He said the provision has caused insurers to put more pressure on health care providers to keep costs down.