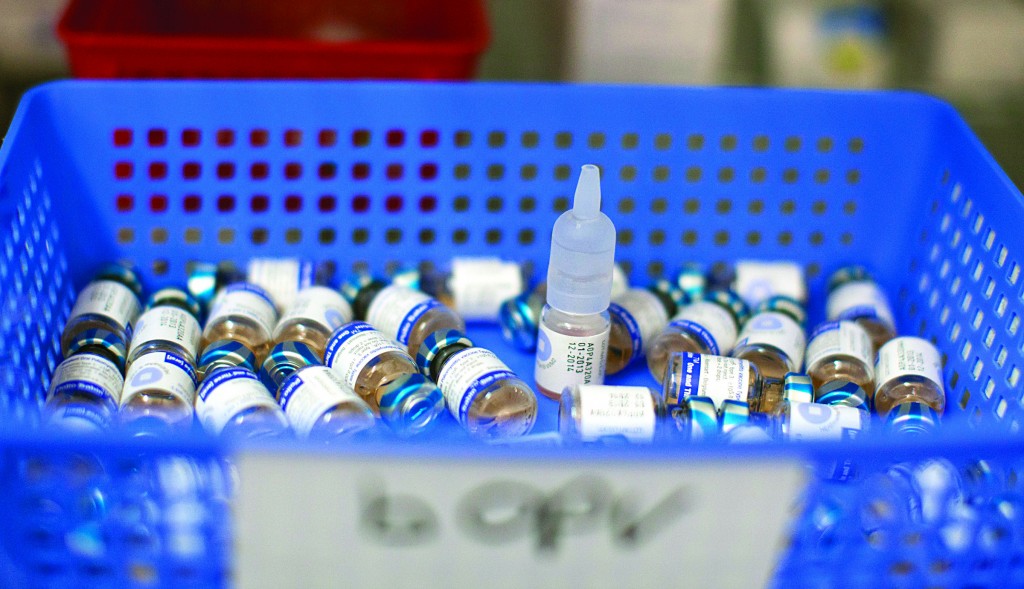 In the face of mounting public concern in Israel about the risk to people with weakened immune systems during the current polio vaccination campaign, healthcare professionals were saying that the fears were exaggerated and that most children would be safe from infection.

Parents and teachers in particular expressed alarm that individuals with low immunity could be exposed to the life-threatening disease, and that many children would have to remain home from school until the campaign ends in November as a protective measure. The Israeli school year begins next week.

A kindergarten of 60 children in Netanya sent a letter to parents not to send children who had not been vaccinated, Ynet reported. Parents complained about the inability to obtain vaccinations right away, and the general uncertainty as to the safety of their children.

However, the Health Ministry insisted that the fears were overstated. Only a few hundred children in the country who had recently undergone a bone marrow transplant, suffered from active leukemia or had a shortage of gamma globulin in their blood, would have to stay home, official said.

Prof. Eli Somekh, head of the Israel Pediatric Association and chairman of the Health Ministry’s advisory council on the vaccination campaign, said that the number of people at high risk is very small, limited mostly to bone marrow transplant patients or those with congenital problems producing antibodies, Haaretz reported.

People with bone-marrow transplants should be inoculated with the killed-virus vaccine (the current campaign uses a live-attenuated vaccine), while those with antibody production problems should ingest a special solution containing antibodies every month.

But that did not mean that no one else would be at risk — including cancer patients, people taking biological drugs and anyone on treatment that suppresses the immune system, such as radiation, chemotherapy or high dosages of steroids. People in this group, as well as those around them, should be extra careful about hygiene, washing their hands frequently, to prevent contracting polio.

“You have to remember that most people have been vaccinated against polio,” Somekh said. “They received the vaccine in the past.”

Health Ministry Director General Roni Gamzo explained that action had to be taken, as the polio virus “is spreading. We must stop it,” he told Army Radio earlier this month. In addition, World Health Organization experts informed the ministry of the danger of the disease spreading beyond Israel’s borders, and urged vaccinations.

Gamzo also tried to calm fears, saying that the vaccinations are safe because the treatment is based on a living polio virus rather than a killed sample. “There are no significant side effects,” he said. “The danger is zero. Vaccinate your children so that the child will not carry and spread the disease to your family and friends.”

Gamzo and Somekh were responding to fears voiced by parents whose children have weakened immune systems, such as one whose 9-year-old daughter has leukemia. Her mother on Sunday described how her daughter, having just completed a course of chemotherapy, was planning to return to school this year after two-and-a-half years at home.

“Now, all that can’t happen, because of the live-attenuated polio vaccine, which every child in the country up to age nine is receiving these days,” she wrote. “My daughter can’t be around children who were vaccinated, or people who came into contact with them within two weeks [afterward]. Because the Health Ministry decided to vaccinate everyone with the live-attenuated virus, rather than the dead one, and also didn’t trouble to squeeze all the vaccinations into a defined time period … I and all other oncology families in Israel are in an unreasonable situation.”

“My doctor told me explicitly that even if my daughter received the dead-virus vaccine today, she still can’t be around children who received the live-attenuated vaccine, at least during the first two weeks,” Eliyahu explained. But since the campaign is slated to continue through November, rather than lasting only two or three weeks, there’s no way of knowing when other children or their siblings were vaccinated, and therefore no way of knowing whether they’re still in the first two weeks.

Somekh answered that in most cases children with weakened immune systems can go to school safely, as long as they’ve received the dead-virus vaccine and are careful about hygiene. But added that parents should consult their physician.

Prof. Shai Ashkenazi, an expert in infectious diseases at Schneider Children’s Medical Center, supported the view that children vaccinated with the dead virus needn’t fear going to school. The risk they face from ordinary viruses, like flu or dysentery, is “thousands of times greater than that from a virus that’s already been attenuated,” he said.

The vaccination campaign is expected to last 60 days and require approximately one million doses.

So far, about 170,000 children in Israel out of a total of one million have received oral polio vaccine. The Health Ministry announced on Tuesday that 35,000 received two drops of OPV that day.