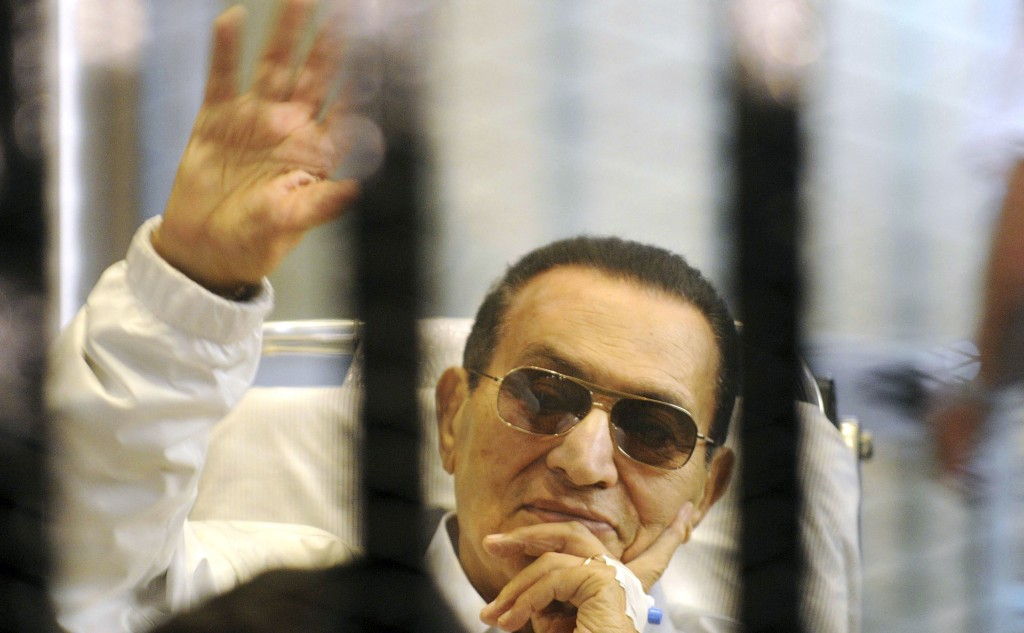 Former Egyptian President Hosni Mubarak, who is on retrial for the killings of hundreds of protesters during the 2011 uprising that led to his ouster, could be released from custody later this week, judicial officials said Monday.

The officials said there were no longer any grounds to hold the 85-year-old former president because of the expiration of a two-year legal limit for holding an individual in custody pending a final verdict.

Mubarak has been in detention since April 2011. He was found guilty and sentenced to life in prison in June last year for his failure to stop the killing of some 900 protesters in the 18-day uprising against his rule. His sentence was overturned on appeal and he is now being retried, along with his security chief and six top police commanders.

Monday’s stunning announcement came as security forces said suspected Islamic terrorists ambushed two mini-buses carrying off-duty policemen in Egypt’s Sinai Peninsula, forcing the men out onto the pavement and shooting 25 of them dead. The brazen daylight attack deepened the turmoil roiling the country and underscored the volatility of the strategic region.

Monday’s killings, which took place near the border town of Rafah in northern Sinai, came a day after security forces killed 36 detainees during a riot on a prison-bound truck convoy north of Cairo. In all, nearly 1,000 people have been killed in violence between security forces and supporters of ousted President Mohammed Morsi since last Wednesday. The government has ordered an investigation into their deaths.

Sinai, a strategic region bordering the Gaza Strip and Israel, has seen almost daily attacks since Morsi’s ouster, leading many to link the terrorists there to the Muslim Brotherhood, the Islamist group from which Morsi hails.

Egyptian military and security forces have been engaged in a long-running battle against terrorism in the northern half of the peninsula.

Al-Qaida-linked fighters, some of whom consider Morsi’s Brotherhood to be too moderate, as well as tribesmen have used the area for smuggling and other criminal activity for years and have on occasion fired rockets into Israel and staged cross-border attacks. A year ago, 16 Egyptian border guards were slain in Sinai near the borders with Gaza and Israel in a yet unresolved attack that is widely blamed on terrorists.

In Monday’s attack, the officials said the policemen were in civilian clothes. There was no immediate claim of responsibility for the attack, which also left two policemen wounded.

Along with the state of emergency imposed after Wednesday’s crackdown on the pro-Morsi sit-ins in Cairo and ensuing street clashes across the country, the military-backed interim government has also begun taking harsher measures to cripple the Brotherhood.

A possible ban, which authorities say would be implemented over the group’s use of violence, would be a repeat of the decades-long struggle between the state and the Brotherhood. It also would drain the group’s financial resources and allow for mass arrests of its members. That likely would diminish the chances of a negotiated solution to the crisis and push the group again underground.

The Brotherhood has shown no signs of backing down though.

It held protests Sunday under the banner of an “anti-coup alliance,” though many appeared smaller in scale than others held in recent days. In the coastal city of Alexandria, protesters clashed with residents. In the southern city of Assiut, security forces fired tear gas to disperse hundreds rallying in front of a mosque.

“They think they can end the movement,” said Muslim Brotherhood senior member Saad Emara. “The more killings, the more people join us.”

Also on Monday, the European Union, which last year pledged a combined 5 billion euros ($6.7 billion) in loans and aid for Egypt, said it would hold an emergency meeting Wednesday to forge a response to the recent violence and discuss whether to halt aid programs and suspend arms shipments.

A day earlier, top EU officials said the bloc will “urgently review” its relations with the country. While the EU lacks the military muscle that gives the U.S. a special position in dealing with Egypt, European nations are a major source of aid, loans, business and tourists.