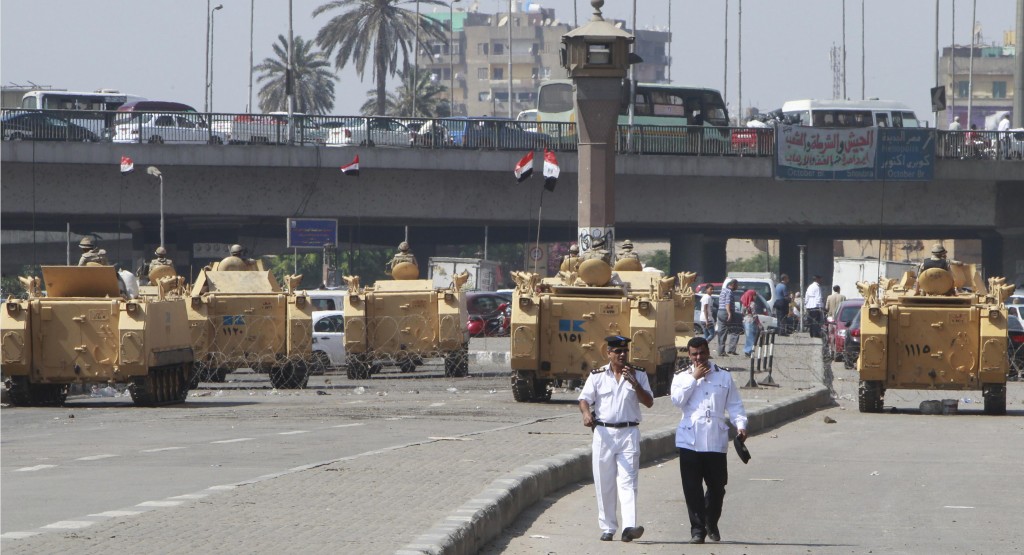 Egypt’s former leader Hosni Mubarak could soon be freed from jail, giving a new jolt to a nation in turmoil, after a court ruled on Monday that he could no longer be held in custody on a corruption charge.

His lawyer said he could be bailed out within days, six weeks after the armed forces Mubarak once commanded deposed his elected Islamist successor to spark the bloodiest internal conflict in the modern history of the most populous Arab state.

The army detained President Mohammed Morsi on July 3 after huge protests against him. It has since cracked down on his Muslim Brotherhood. Among hundreds of casualties, dozens of security personnel have died, including 25 policemen killed by suspected Islamists near the border with Israel on Monday.

At 85, Mubarak may have no political future but his release could stir emotions and raise new questions on whether the popular uprising that ended his 30-year rule in February 2011 is leading back simply to a new form of military-backed government.

State media showed the 25 coffins of the slain policemen, draped in Egyptian flags, arrive by plane in Cairo.

“Those Brotherhood terrorists have to be killed now by the hands of decent citizens,” said Ayman Mohamed, who was introduced as a cousin of one of the dead, his words underscoring the gaping chasm growing in Egyptian society.

The Brotherhood officially renounced violence decades ago, denies any links with armed terrorists, including those in Sinai who have gained strength since Mubarak’s overthrow, and disavows attacks on churches that have proliferated in the past week.

The United States, a major provider of military and other aid to Egypt, warned against banning the movement and questioned an official account of how 37 Islamist prisoners died on Sunday.

After Monday’s court ruling, the only legal grounds for Mubarak’s continued detention rest on a second corruption case which his lawyer, Fareed el-Deeb, said would be settled swiftly.

“All we have left is a simple administrative procedure that should take no more than 48 hours,” Deeb told Reuters.

“He should be freed by the end of the week.”

Without confirming that Mubarak would be released, a judicial source said he would spend another two weeks behind bars before a court ruling on the outstanding case against him.

Fareed Ismail, a Muslim Brotherhood politician, compared the possible release of Mubarak with the laying of new accusations against Morsi, who is held at an undisclosed location. The two decisions were, he said, “not surprising, as we are expecting Mubarak to be released while we see honorable people jailed.”

Mubarak’s release on bail from Cairo’s Tora prison, which now also houses many senior Brotherhood figures, could generate more political tension. Almost 900 people, including more than 100 soldiers and police, have been killed since the authorities forcibly dispersed Brotherhood sit-ins in Cairo on Wednesday.

Monday’s massacre in the Sinai, where attacks on security forces have multiplied since Morsi’s removal, will only heighten tensions. Photographs circulated on social media and purporting to show the aftermath of the attack showed victims lying with their hands tied behind them, apparently shot execution-style.

The images could not be immediately verified.

Mounting insecurity in Sinai worries Egypt and also the United States because the desert peninsula lies next to Israel and the Palestinians’ Hamas-ruled Gaza Strip, as well as the Suez Canal, one of the world’s most important shipping arteries.

The United States, an ally of Egypt since it made peace with Israel in 1979, has postponed delivery of four F-16 fighters and scrapped a joint military exercise, but has not halted its $1.55 billion in annual aid, spent mostly on U.S.-made arms supplies.

“We have not made a policy decision to put a blanket hold on the economic support fund,” State Department spokeswoman Jen Psaki told a briefing in Washington. “That review is ongoing, and includes military assistance, security assistance and also includes economic assistance.”

But Saudi Arabia, another U.S. ally, pledged to fill any financial gaps left by Western countries withdrawing aid from Egypt over the army crackdown.

“To those who have declared they are stopping aid to Egypt or are waving such a threat, the Arab and Muslim nations are wealthy with their people and resources and will not shy away from offering a helping hand to Egypt,” Saudi Foreign Minister Prince Saud al-Faisal said.