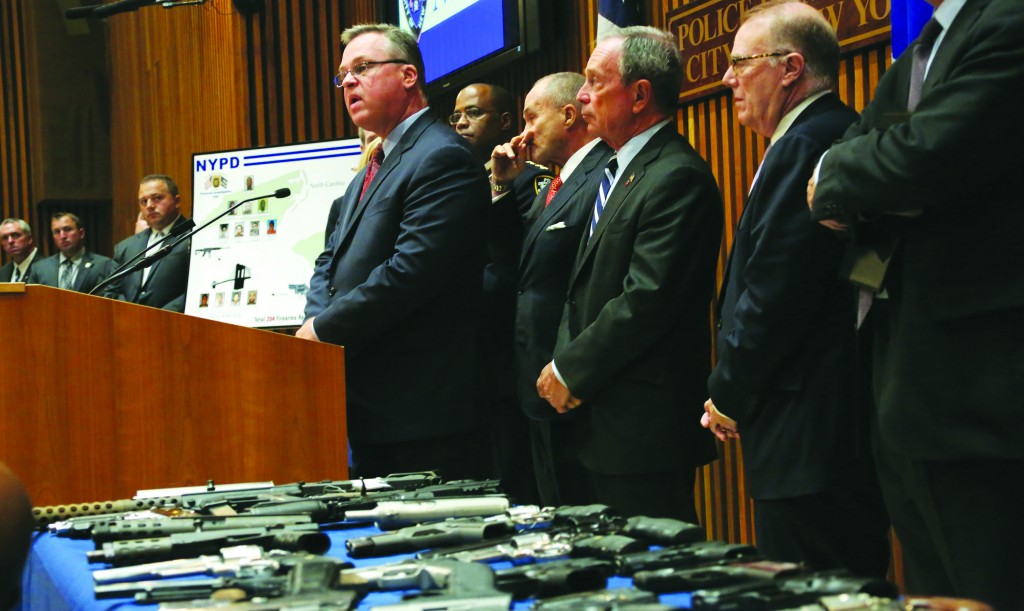 A pair of gunrunners smuggled firearms into New York City by hiding them in luggage they carried on discount buses that offered cheap fares and lesser odds of getting caught, Mayor Michael Bloomberg announced Monday.

An undercover city police officer posing as a gun broker for criminal customers bought 254 weapons from the men in dozens of transactions since last year — the largest gun seizures in the city in recent memory. One of the guns was an assault rifle that was disassembled and transported in a zebra-striped bag.

The alleged smugglers, Walter Walker and Earl Campbell, were among 19 people arrested earlier this month in New York and in North Carolina and South Carolina — states where the guns originated — as the result of a 10-month investigation.

Bloomberg, at a Police Plaza press conference designed to draw attention to a signature issue of his, said it was another example of a persistent black market in which firearms from the South can sell for three times their original price in the city. New York has some of the nation’s strictest gun-control measures and a mayor who has crusaded for tougher laws in other states.

“There is no doubt that the seizure of these guns has saved lives,” Bloomberg said.

“Perhaps the two most disturbing aspects of the gun-trafficking operation were the simplicity of the business model, and the complete indifference of the gun suppliers to the mayhem their actions would cause here in New York City,” Brennan said. “The marketing strategy was buy low, sell high and keep a low profile.”

The gun case was a spinoff of a drug investigation in Brooklyn that turned up online photos of handguns and wads of cash. Wiretap and other evidence led investigators to Walker, 29, of Sanford, N.C. and Campbell, 24, of Rock Hill, S.C., who were smuggling guns separately but using the same middleman in New York.

The two tapped a loose network of suppliers in their hometowns. Some guns were obtained on the black market, while others were bought from gun dealers using straw buyers to get around one-gun-a-month restrictions.

“The problem is that the gun laws passed now, so it’s like now I can only buy a gun from a gun store every 30 days,” Campbell complained in one conversation, according to an indictment. “So I had to, like, pay different people to keep buying different guns.”

Before heading to New York, Campbell would get photos of the guns his suppliers were offering and send the images to the undercover officer. Both defendants would travel to the city carrying a dozen or more handguns, rifles and shotguns in bags that were stowed in luggage compartments of Chinatown-based carriers.

In January, the undercover officer met with Campbell and a friend, who was carrying assault rifle parts. The friend struggled to assemble the weapon in the backseat of a car by using an instructional video pulled up on her smartphone. When she failed, the undercover bought the pieces anyway for $1,100.