Business To Some Truckers, DOT Rules to Combat Fatigue Are Tiresome
Business 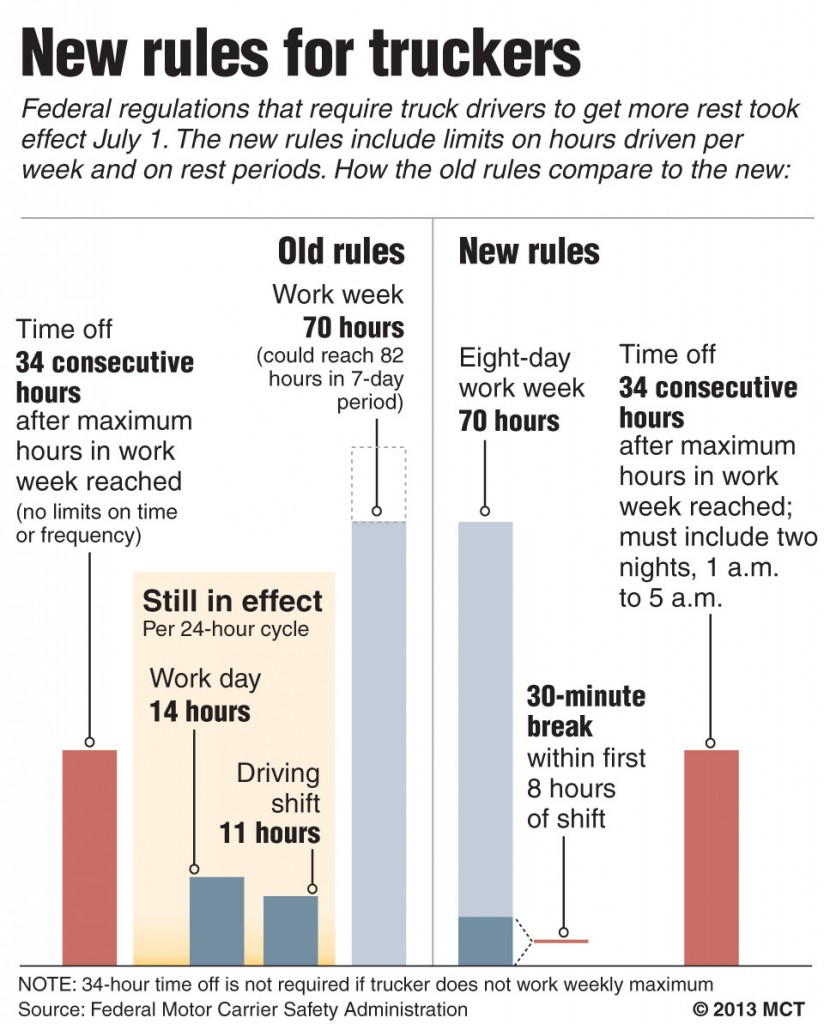 For commercial truck drivers such as Charles Ryser, when the wheels aren’t turning, you aren’t earning.

Until July, Ryser and his father – who drive in a team from a base in Forsyth, Ga. – worked on their own terms. Charles took the day shift, while his father, David Ryser, got behind the wheel at dusk.

But because of a Department of Transportation attempt to cut down on fatigued drivers, Ryser now has to comply with rules that lead to more downtime, and force him to switch shifts regularly with his father, breaking him  his rhythm.

“How is that safe, if you have someone trying to alter their sleep pattern on a dime?” he asked.

Like it or not, the rules are here to stay, as efforts to roll back the changes pushed by the Federal Motor Carrier Safety Administration, an arm of the Department of Transportation, have failed. Earlier this month, the DOT won a key legal victory, after the U.S. Court of Appeals upheld the vast majority of the rules. The American Trucking Associations and the Owner Operator Independent Drivers Association, the two main groups that strongly oppose the rules, said that any further legal challenges were unlikely.

The rules were crafted in December 2011, to restrict driving hours more tightly. The biggest change comes from restructuring the “restart” that truckers use to reset their weekly count; the DOT says the revision effectively lowers the maximum average workweek for truckers, from 82 to 70 hours.

In the past, a workweek could reset anytime after a trucker took 34 consecutive hours off. Now the clock can be reset only once a week, and if time off includes two consecutive periods from 1 a.m. to 5 a.m. The regulations also add a mandatory 30-minute break after eight hours of driving, while reinforcing that truckers still may not drive more than 11 hours a day.

The new restart, advocates say, is aligned with the body’s natural tendencies to sleep at night. The DOT estimates that the rule will help prevent 1,400 truck crashes, 560 injuries and 19 deaths per year, while affecting only the less than 15 percent of truckers who drive the greatest number of hours .

The DOT doesn’t keep truck-specific figures in a way that allows for direct comparison, but a broader category, comprising trucks and buses, showed 320,000 crashes in 2011, leading to about 4,000 deaths. While it’s difficult to pinpoint how many truck crashes are due to fatigue, a study sponsored by the DOT concluded that 13 percent of commercial drivers who were involved in serious crashes were fatigued at the time.

But opponents argue that all truckers, not just those with extreme schedules, will feel the ripple effects.

“What they are doing is applying rigidity where there actually needs to be flexibility,” said Norita Taylor, a spokeswoman for the Owner Operator Independent Drivers Association. “Not all driver’s jobs and businesses are run the same, and not all people run the same, in regard to their body clock.”

In the case of the Rysers, shipping delays can create unexpected downtime, potentially forcing them into restarts they’d rather not take. They flip their shifts to avoid that scenario.

Now that the rules are permanent, the Owner Operator Independent Drivers Association plans to focus on a push for increased new-driver training. Currently, long-haul truck drivers don’t have mandatory training outside of the commercial driver’s license test.

Not everybody is hesitant about stricter regulation.

In fact, Henry Jasny, the vice president of the Advocates for Highway and Auto Safety, doesn’t think the rules go far enough. His group pushed to move the clock back to pre-2003 regulations, with no restart and a 10-hours-per-day driving limit.

“Today the American public is less safe, because this dangerous rule puts the economic profit of the trucking industry ahead of public safety,” he said, in a statement released after the court decision.

Trucker Charles Ryser thinks it’s a misconception that drivers don’t have downtime. Given the unpredictable nature of loading times, he’s been delayed for hours, waiting for a shipment; that’s time he can use to rest.

“We have way too many variables out here on the road,” he said. “We’ve got accidents, delays in shippers and receivers, traffic jams.”

Drivers occupy one of the exemptions to federal overtime laws, and many get paid per mile. In the DOT’s analysis of costs and benefits, the new rules are an overall positive, providing a net benefit of $205 million annually. While costs were easier to predict, estimating the overall value of the law proved difficult, as the agency highlighted the unpredictable nature of the benefits, including reduced fatigue, coupled with the long-term health benefits of added sleep.

“Studies show that working long daily and weekly hours on a continuing basis is associated with chronic fatigue, a high risk of crashes and a number of serious chronic health conditions in drivers,” said Anne Ferro, the head of the Federal Motor Carrier Safety Administration. She added that the agency had reached out to industry stakeholders, and included some of their recommendations in the final rules.

But Dave Osiecki, the senior vice president of policy and regulatory affairs for the American Trucking Associations, isn’t buying the health estimates, which he  called “highly speculative.”

“The government has created hundreds of millions of dollars of health benefits on paper, that it’s very hard to believe will ever be achieved,” he said. His group led the legal push against the regulations.

Professor Jose Holguin-Veras, the director of the Center for Infrastructure, Transportation and the Environment, at Rensselaer Polytechnic Institute, said that conclusively determining the costs and benefits was exceedingly difficult.

“This is one of those issues that are very, very tough, because you have a tradeoff between productivity and safety. You have all those things intersecting,” he said. “There is not a clear best solution.”

With the new rules in place, Charles Ryser said, he’d been forced to add downtime, something he’d hoped to avoid when he joined a team with his father. He said his truck could be out of service up to an extra 12 hours a week, translating to lost revenue.

Congress asked the DOT to update its drive-time regulations in 1995, but the rules have been subject to a constant legal battle, since they first came out in 2003.