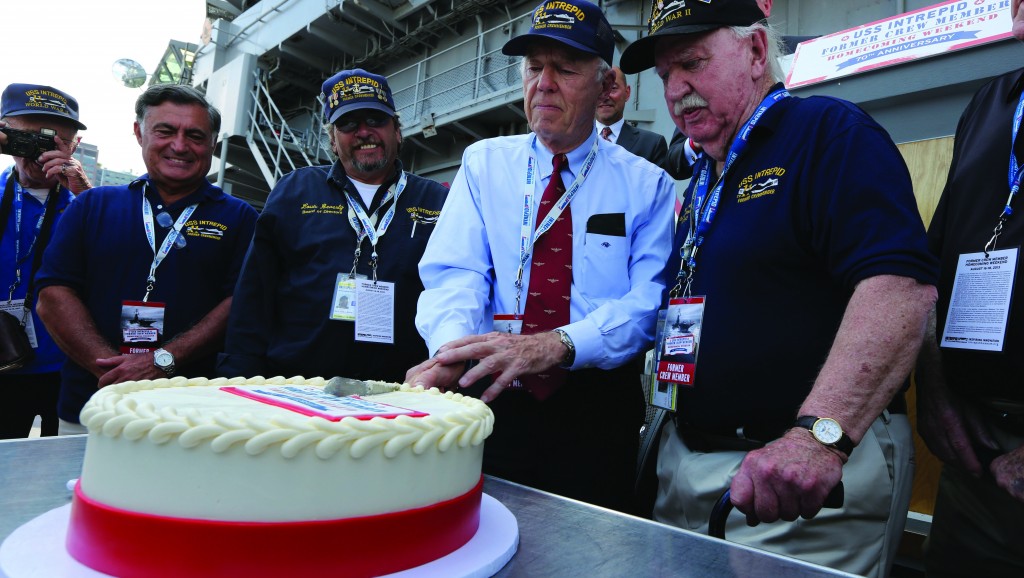 About 300 former crew members of the battleship-turned-museum USS Intrepid returned to the ship on Friday to mark the 70th anniversary of its commissioning at the height of World War II.

The Navy veterans served on the aircraft carrier between 1943 and 1974, when the 27,100-ton vessel was decommissioned. It reopened in 1982 as a tourist attraction, the Intrepid Sea, Air & Space Museum, on the West Side of Manhattan.

“I couldn’t believe anything that big could possibly float,” said Barry, 88.

But he said his commanding officer told him that it would not only float but would “go to sea and win the war.”

The Intrepid took part in several campaigns in the Pacific Ocean theater and was damaged five times by kamikaze aircraft. Barry, then a radioman first class, remembered the sound of gunfire from Japanese planes getting closer — first “boom, boom, boom,” then “bang, bang, bang,” and finally a rapid “bat-bat-bat-bat-bat.”

“There was no place to hide,” he said. “Just grit your teeth and keep copying transmissions.”

The Intrepid was modernized after the war and became an anti-submarine carrier. It participated in the Vietnam War and was the recovery ship for two space missions.

William Bradler, of Ashtabula, Ohio, joined the Navy in 1959 and served as an aviation machinist on the Intrepid during a European cruise in 1960-61. Friday was his third time returning to the ship since it became a museum.

Some of the oldest veterans attended the ceremony in wheelchairs, assisted by children and grandchildren.

Daniel Kaszubski, of North Tonawanda, accompanied his 89-year-old father, John Kaszubski, and said he was overcome by emotion at the sight of the Intrepid and the thought of his father’s service.

“It brings tears to my eyes,” he said.