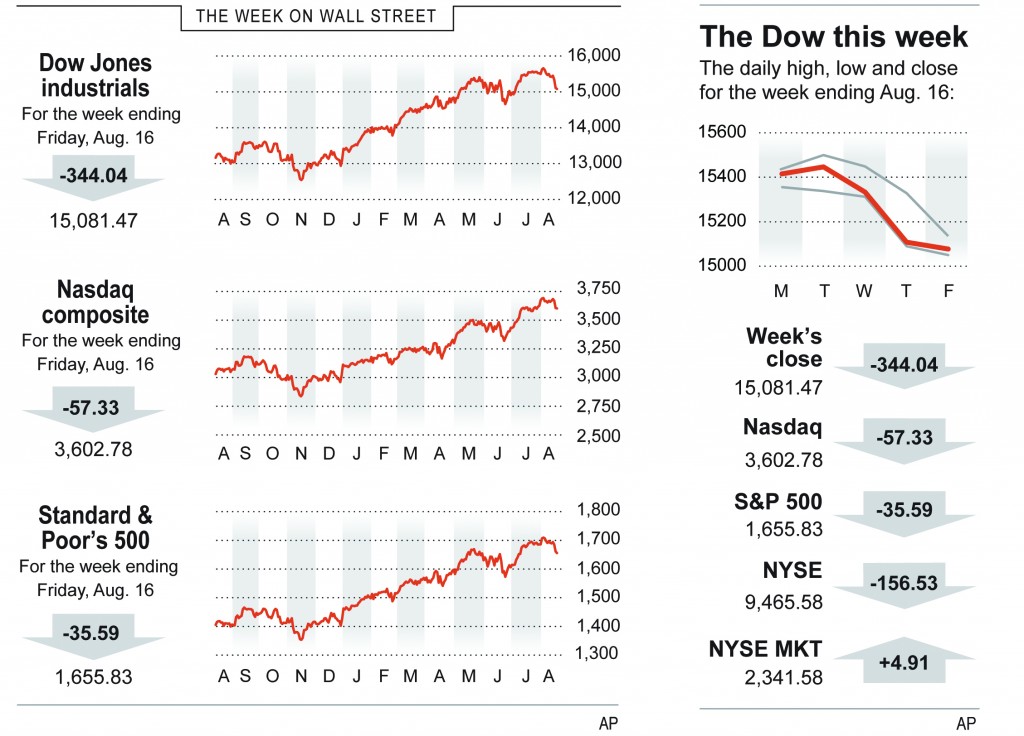 Stocks fell Friday, closing out what was the worst week of the year for the Dow Jones industrial average.

The market was dragged lower by a weak performance from retailers and companies sensitive to higher interest rates. Homebuilders and banking stocks were among the best performers.

The possibility of a cutback in the Federal Reserve’s massive bond-buying program in September has roiled the bond market, which has spilled over into stocks. The yield on the benchmark U.S. 10-year Treasury note rose to 2.83 percent, its highest level since July 2011. A week ago, the yield was 2.58 percent.

“When yields are going up like this, that’s scary for most equity investors,” said Brian Reynolds, chief market strategist at Rosenblatt Securities.

Stocks such as utilities, pharmaceuticals and telecommunications are often purchased because they provide a higher-than-normal dividend. As Treasury yields rise, it makes all dividend-paying stocks less attractive to investors because Treasuries can provide a similar return with significantly less risk.

Retailers continued their multi-day selloff. Nordstrom Inc. gave a bleak sales outlook late Thursday that echoed similar forecasts from Wal-Mart Stores Inc. and Macy’s Inc. earlier this week. The outlooks have raised worries that U.S. shoppers might be pulling back on spending.

The retail industry is a closely-watched part of the U.S. economy as consumer spending makes up roughly 70 percent of economic activity. The disappointing outlooks are worrisome because they take into account the back-to-school shopping season, typically the second-biggest shopping period for U.S. retailers.

With the bond market declining and stocks selling off, investors shifted into a safer asset — gold. Its price rose $10.1, or 0.7 percent, to $1,371. Gold had its third-best week this year, rising 3.7 percent.

Also in focus were homebuilders. The government reported that new home construction was up 6 percent in July to a seasonally-adjusted rate of 896,000.

Housing has been one of the bright spots of the U.S. economy for the last several months. In June, home builders sought the most building permits for single-family homes in five years. New-home sales jumped in June to their highest level in five years as well.

In other news, personal computer maker Dell Inc. reported a 72-percent drop in its fiscal second-quarter earnings. That may help convince Dell shareholders to approve the $24.8 billion buyout proposed by founder Michael Dell.