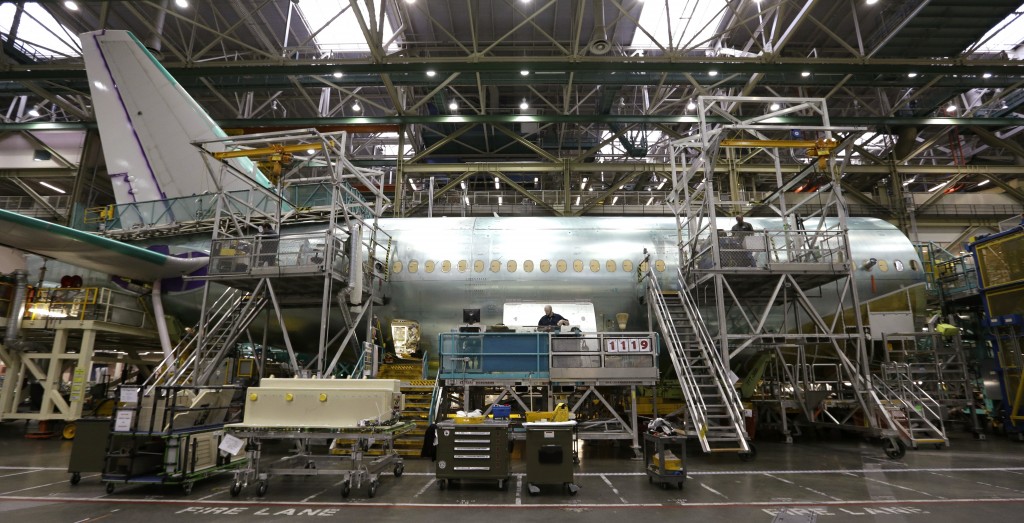 Next month, at a secret facility in Anacortes, more than 40 miles north of Boeing’s widebody-jet plant in Everett, Wash., a small group of engineers  will begin testing advanced automation methods for building the soon-to-be-launched 777X jet.

The hush-hush project reveals that Boeing intends to dramatically change the way the plane’s metal hull is built, reducing manual labor on that task while ramping up the overall production rate.

“We’re going to build the fuselage differently than we do now,” said a senior Boeing engineer familiar with details of the plan. “We’re going to introduce a whole lot of automation.”

Meanwhile, in a nerve-wracking process that could either boost or bust future manufacturing in the Puget Sound region, Boeing is still weighing various plans for where to put 777X manufacturing – including Everett, alternative company facilities and non-Boeing sites.

One option being weighed: Do everything in Everett.

Another: Outsource to Japan the fabrication of the fuselage sections, now done in Everett.

Boeing spokesman Mike Tull declined to discuss what’s going on inside the Anacortes facility. Regarding location of 777X manufacturing, he cautioned that “we really are studying all of our options, and no decisions have been made yet.”

The 777X, a major update to Boeing’s successful, large widebody twinjet, features composite plastic wings and new fuel-efficient engines, but retains the 777’s aluminum fuselage. It’s due to enter service by the end of the decade.

The metal fuselage panels today are made in Japan, then shipped to Everett. A person with knowledge of discussions between Boeing and Mitsubishi said the two companies have studied the possibility of the 777X fuselage sections being built in Japan.

However, that outcome may be a long shot for the Japanese. The senior Boeing engineer said the company would be loath to outsource the innovation that’s brewing in Anacortes.

“There is a competition to win the business,” the senior engineer said, but “the Everett team thinks it has a plan that will be successful.”

That detailed plan includes converting the Everett assembly bay,  now partly used as an extra “surge line” for the 787 Dreamliner, into a 777X assembly line, side by side with the existing 777 line.

Such an outcome, including manufacturing of the composite-plastic wing, could more than compensate Everett for any jobs lost to automation.

Boeing is expected to formally launch the 777X program this fall, which will trigger a huge development program, employing thousands of engineers in Everett.

More than 3,000 Boeing employees now work directly on the 777 or support its production. Retaining that work, as Boeing transitions to the 777X, is vital to the region’s economy.

Gov. Jay Inslee OF Washington has said he’ll make it a priority to streamline regulatory procedures and permitting for any development Boeing requires, and his aerospace office is expected to come up with further training and infrastructure incentives, later this year

The Anacortes project may open up a need for training in new automation processes.

Boeing has leased 18,000 square feet, inside a former boat-manufacturing facility on the waterfront at Fidalgo Bay, for the 16-month development and test program.

Its permit application to the Northwest Clean Air Agency describes the Anacortes operation as a “temporary project” that will run from next month through the end of 2014, and “will involve the assembly of a non-production aft aircraft fuselage and a shorter test fuselage section.”

“The project investigates the use of new automation technologies in the assembly of aircraft fuselages,” the application states. “The project is being conducted by our Engineering and Research & Technology groups, and the parts that will be made in Anacortes will not be used for production purposes.”

The Boeing engineer said the research is aimed at heading off competition from the Airbus A350-1000, by increasing 777 production substantially above the current rate of 100 jets per year.

A bottleneck in the existing 777 manufacturing process is the big fixtures – referred to in the industry as “tooling” – that hold large, curved metal panels in position, as they are fastened together into 777 fuselage barrels.

To ensure perfect alignment, the lower lobe of each fuselage section is first constructed upside down, on top of the precisely positioned passenger-floor grid.

This lower lobe must then be lifted by crane out of the fixture, and placed in a giant turning tool that flips the whole thing right-side-up.

Then another crane moves the piece to a different fixture, for the buildup of the upper lobe.

Boeing aims, through automation, to make fabricating the fuselage sections much more efficient, allowing it to increase the 777 production rate from today’s 8.3 jets per month, potentially to 10 or 12 jets per month.

The senior engineer declined to provide technical details of the automation research, for competitive reasons. He conceded Boeing is “playing catch-up to Airbus” in automation of manufacturing.

George Bullen, an expert on automation of airframe manufacturing and formerly head of advanced-manufacturing technology and advanced programs for Northrop Grumman, agreed.

“They’ve gone for a higher degree of automation” at Airbus, Bullen said.

He said there are well-established ways to update the way the 777 fuselage is built. For instance, Boeing can rotate the fuselage section within the tooling to assemble the other side, rather than moving it by crane into a separate tool to turn it.

“There are only so many options open,” Bullen said. “There’s no magic out there.”