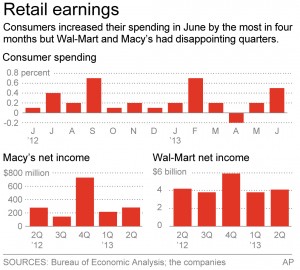 Bleaker outlooks at retailers like Wal-Mart and Macy’s are raising doubts that consumers will spend enough in coming months to lift the still-subpar U.S. economy.

Though the economy is growing steadily, Americans are being hampered by weak pay, higher taxes and tepid hiring. Sluggish overseas economies are also slowing sales for U.S. retailers. It’s a picture the Federal Reserve will weigh, in deciding whether to scale back its bond purchases as soon as next month.

“Consumers aren’t going to start spending with abandon, until we see much stronger job and wage growth,” says Mark Vitner, an economist at Wells Fargo.

Average weekly paychecks have grown just 1.3 percent, since the recession ended more than four years ago. Over the past 12 months, pay has trailed even low inflation. That’s partly why spending has remained lackluster, and why many Americans may be postponing purchases at department stores, so they can buy cars, homes and other costly necessities.

Americans increased their spending at an annual rate of just 1.8 percent in the April-June quarter, down from a 2.3 percent rate in the January-March period. Consumer spending is expected to improve in the second half of the year. But most economists foresee only a slight acceleration,  to an annual rate of two percent to 2.5 percent.

Those spending rates are historically weak. And they’re too meager to significantly boost the economy, which grew at an annual rate of just 1.4 percent in the first half of the year. Consumer spending fuels about 70 percent of the U.S. economy.

For much of this year, many Americans have made major purchases they had postponed during the recession and the weak recovery. Auto and home sales have strengthened. Yet that’s left less spending money for discretionary purchases, such as electronic goods, clothes and restaurant meals.

The trend has weakened sales and profits at retailers like Macy’s. On Wednesday, Macy’s reported a disappointing profit for its second quarter, and cut its outlook for the year.

And Wal-Mart, the world’s biggest retailer, issued an earnings report Thursday that intensified worries about the strength of U.S. consumers, long a driving force for the global economy.

The Bentonville, Arkansas-based discounter said it expects economic strains in the United States and abroad to squeeze its low-income shoppers  for the rest of the year. Wal-Mart is considered an economic bellwether: It accounts for nearly 10 percent of nonautomotive retail spending in the United States.

The state of the American consumer will be a key factor the Fed will consider, in deciding whether to scale back its $85 billion monthly Treasury and mortgage bond purchases. Those purchases have been intended to keep rates on mortgages and other long-term loans near record lows.

Chairman Ben Bernanke and other Fed officials have said the central bank could start slowing its bond purchases later this year, if the economy continues to strengthen. Many economists think a slowdown in bond purchases will be announced at the Fed’s next meeting, Sept. 17-18.

Vitner is among those who think the Fed will start slowing its purchases in September. He suggested that bond purchases on a scale of $85 billion a month are intended for extraordinary circumstances.

“It’s not something you use when the economy is just struggling,” Vitner said.

Retail analysts note that back-to-school sales have been slow so far – potentially a worrisome sign for winter holiday sales late this year. If back-to-school business falls below expectations, stores could pare their holiday orders, Perkins said. That would slow production at manufacturers.

Michael P. Niemira, chief economist at the International Council of Shopping Centers, expects sales for the back-to-school season to grow 3.1 percent from last year, to $42.2 billion. That would be less than the 3.6 percent gain in 2012, and below the 3.3 percent average annual increase for the past decade.

Among consumers who are making tough decisions about where to direct their limited spending money is Lance McConnell, of Urbandale, Iowa.

McConnell, 33, a teacher, bought a used car a few weeks ago for $23,000. He said the $350 monthly payments mean he won’t be making any impulse purchases for the back-to-school season and beyond.

“I feel, overall, confident about the economy,” said McConnell, a father of three daughters, ages three, six and eight. “But we really watch what we spend, and how we spend.”

Such sentiment may help explain why Macy’s, typically a stellar performer, issued a dim outlook Wednesday.

Similarly, Kohl’s Corp., a department store chain that serves middle-income shoppers, announced Thursday that its second-quarter net income declined four percent. It, too, trimmed its outlook for the year.

Those cautionary reports came on top of warnings last week from two teen stalwarts, American Eagle Outfitters Inc. and Aeropostale Inc. Both cited the need to discount much of their merchandise, to induce shoppers to buy.

Though the economy officially emerged from recession in June 2009, many consumers remain reluctant to buy goods that aren’t discounted, said Sung Won Sohn, an economist at California State University.

Sohn noted that JC Penney’s former CEO, Ron Johnson, learned that lesson the hard way, after he eliminated sales at Penney’s. Many shoppers deserted Penney’s, and Johnson lost his job.

Retailers who cater to middle- and lower-income shoppers have suffered, in part because their customers haven’t benefited as much from the recovery. Rising stock prices and home values have mainly benefited upper-income Americans.

“It’s getting better on Wall Street and in the news reports, but the economy isn’t getting better with the average consumer,” said C. Britt Beemer, chairman of America’s Research Group, a consumer research firm.

Yet even some retailers that serve upper-income shoppers are dimming their forecasts. For example, Nordstrom, a barometer of luxury spending, on Thursday reduced its sales outlook for the year. The company issued its report after the stock market closed, and its stock sank in after-hours trading.

Wal-Mart has said its lower-income consumers, in particular, have been squeezed by this year’s Social Security tax increase. The tax increase has meant that a household earning $50,000 has about $1,000 less to spend this year.

The company is also being hampered by persistent economic weakness in Asia, Latin America and elsewhere. Wal-Mart said consumers in both developed and emerging economies held back on spending in the first half of the year. It pointed, in particular, to sluggish sales last quarter in Japan and Mexico.