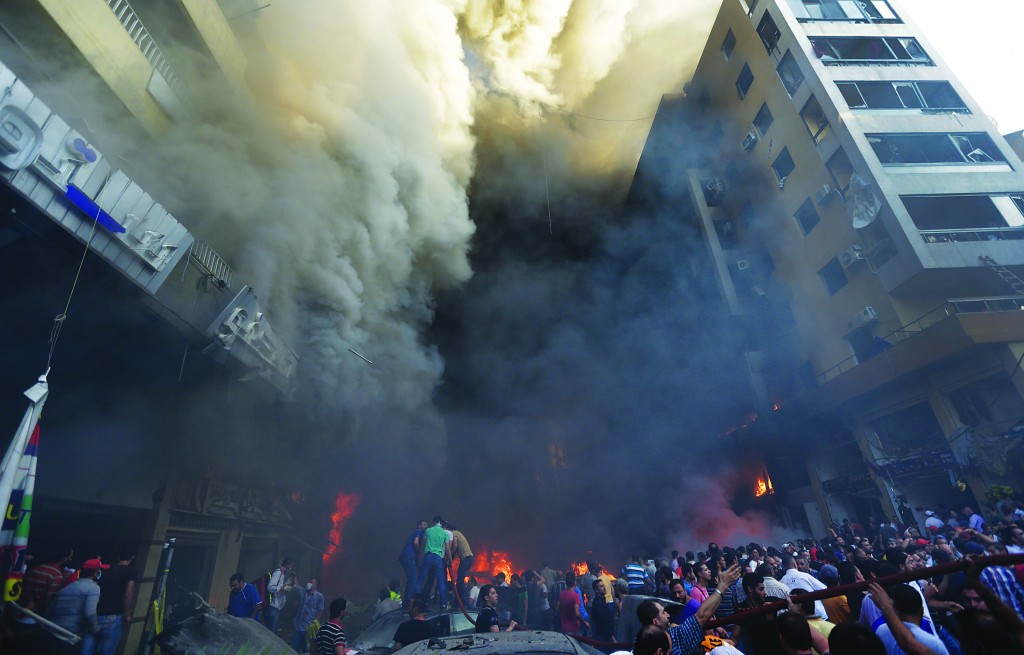 A powerful car bomb struck the southern Beirut stronghold of Hizbullah in Lebanon on Thursday, killing 20 people, wounding 120 and trapping many others inside damaged buildings, witnesses and emergency officials said.

The blast, a month after another car bomb wounded more than 50 people in the same district of the Lebanese capital, came amid sectarian tensions over the intervention of Shiite Muslim Hizbullah fighters against Sunni rebels in Syria’s civil war.

A Sunni Islamist group calling itself the Brigades of Aisha claimed responsibility for the attack and promised more operations against Hizbullah. It was not immediately possible to verify the statement, made in an internet video.

“I don’t know what happened. It’s as if we were struck by an earthquake,” one young man at the scene told Reuters, bleeding from a stomach wound.

Residents of southern Beirut say Hizbullah, backed by Iran and Syria, had been on high alert and stepped up security in the area after warnings from Syrian rebels of possible retaliation for the group’s support for President Bashar al-Assad.

“I heard a huge explosion. It threw me several meters,” said a woman in her 50s, who had been talking to her brother in his shop. “I don’t know what happened to my brother. I can’t find him,” she added, bleeding from wounds to her hands and face.

“This is the second time that we decide the time and place of the battle … and you will see more,” the Brigades of Aisha statement said, describing Hizbullah and Nasrallah as Iranian agents.

“We send a message to our brothers in Lebanon. We ask you to stay away from all the Iranian colonies in Lebanon … because your blood is precious to us,” a masked spokesman, flanked by two men brandishing rifles, said in the video.

“But Hassan Nasrallah is an agent of Iran and Israel, and we promise him more and more [attacks].”

However, many Lebanese politicians pointed the blame at Israel. “The explosion was carefully prepared, and one of the theories is that it could have been an Israeli retaliation for the Labouneh operation,” Interior Minister Marwan Charbel said.

He was referring to an incident last week when four Israeli soldiers were wounded in southern Lebanon. Nasrallah said on Wednesday that they were targeted by Hizbullah, which fought a monthlong war with Israel in 2006.

Caretaker Prime Minister Najib Mikati declared Friday would be a day of mourning for the victims of the Beirut blast.

Sectarian violence fueled by the Syrian conflict has also erupted in the Bekaa Valley and the Mediterranean port cities of Tripoli and Sidon, reflecting the renewed tensions spreading through the Middle East.

Lebanon’s Sunni Muslims mostly support the rebels in Syria, while Shiites have largely supported Assad, who is part of the minority Alawite sect, an offshoot of Shiite Islam.

Hizbullah leader Nasrallah has promised that his group will continue fighting for Assad after it spearheaded the recapture of the strategic town of Qusair in June.

In October last year, a car bomb in the east of the capital killed a senior intelligence official, Wissam al-Hassan, who was close to the country’s leading Sunni opposition party, which has supported the uprising in Syria.