State of Emergency in Egypt After Hundreds Killed

Riot police backed by armored vehicles, bulldozers and helicopters Wednesday swept away two encampments of supporters of ousted President Mohammed Morsi, setting off running street battles in Cairo and other Egyptian cities. At least 278 people were killed nationwide, many of them in the crackdown on the protest sites.

Vice President Mohamed ElBaradei, a Nobel Peace Prize laureate and pro-reform leader in the interim government, resigned in protest over the assaults as the military-backed leadership imposed a monthlong state of emergency and nighttime curfew.

Clashes broke out elsewhere in the capital and other provinces as Islamist anger spread over the dispersal of the 6-week-old sit-ins by Morsi’s Islamist supporters that divided Egypt.

It was the highest single-day death toll since the 18-day uprising that toppled autocrat Hosni Mubarak in 2011.

The Health Ministry said 235 civilians were killed and more than 2,000 injured, while Interior Minister Mohammed Ibrahim said 43 policemen died in the assault. He said Morsi supporters attacked 21 police stations and seven Coptic Christian churches across the nation, and assaulted the Finance Ministry in Cairo, occupying its ground floor.

The violence drew condemnation from other predominantly Muslim countries, but also from the West, with Secretary of State John Kerry saying it had dealt a “serious blow” to Egypt’s political reconciliation efforts.

The assault to take control of the two sit-in sites came after days of warnings by the interim administration that replaced Morsi after he was ousted in a July 3 coup. The camps on opposite sides of the capital began in late June to show support for Morsi. Protesters — many from Morsi’s Muslim Brotherhood — have demanded his reinstatement. 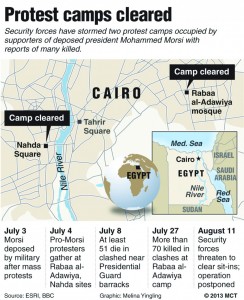 The smaller camp was cleared relatively quickly, but it took hours for police to take control of the main sit-in site, which is near the Rabbah al-Adawiya Mosque that has served as the epicenter of the pro-Morsi campaign.

Several senior leaders of the Muslim Brotherhood who were wanted by police were detained after police stormed the camp near the mosque, according to security officials and state television. Among those seized were Brotherhood leaders Mohammed el-Beltagy and Essam el-Erian, and hard-line cleric Safwat Hegazy — all wanted by prosecutors to answer allegations of inciting violence and conspiring to kill anti-Morsi protesters.

Smoke clogged the sky above Cairo and fires smoldered on the streets, which were lined with charred poles and tarps after several tents were burned.

In imposing the state of emergency, the government ordered the armed forces to support the police in restoring law and order and protect state facilities. The nighttime curfew affects Cairo and 10 provinces.

The Egyptian Central Bank instructed commercial banks to close branches in areas affected by the chaos. The landmark Giza Pyramids and the Egyptian Museum also were closed to visitors for the day as a precaution, according to the Ministry of Antiquities.

The turmoil was the latest chapter in a bitter standoff between Morsi’s supporters and the interim leadership that took over the Arab world’s most populous country. The military ousted Morsi after millions of Egyptians massed in the streets at the end of June to call for him to step down, accusing him of giving the Brotherhood undue influence and failing to implement vital reforms or bolster the ailing economy.

The coup provoked similar protests by Morsi’s backers after he and other Brotherhood leaders were detained as divisions have deepened, dealing a major blow to hopes of an end to the turmoil that followed the 2011 revolution against Mubarak.

Morsi has been held at an undisclosed location. Other Brotherhood leaders have been charged with inciting violence or conspiring in the killing of protesters.

In his resignation letter, he wrote that he is not prepared to be held responsible for a “single drop of blood,” and that only more violence will result, according to a copy that was emailed to The Associated Press. He said Egypt is more polarized than when he took office.

Two journalists were among the dead — Mick Deane, 61, a cameraman for British broadcaster Sky News, and Habiba Ahmed Abd Elaziz, 26, a reporter for the Gulf News, a state-backed newspaper in the United Arab Emirates, the news organizations reported. Both had been reported to be shot.

Several bids by the U.S., the European Union and Gulf Arab states to reconcile the two sides in Egypt in an inclusive political process have failed, with the Brotherhood insisting that Morsi must first be freed along with several of the group’s leaders who have been detained in connection with incitement of violence.

The trial of the Brotherhood’s leader, Mohammed Badie, and his powerful deputy, Khairat el-Shater, on charges of conspiring to kill protesters is due to start later this month. Badie is on the run, but el-Shater is in detention. Four others are standing trial with them on the same charges.

This article appeared in print on page 1 of the August 15th, 2013 edition of Hamodia.