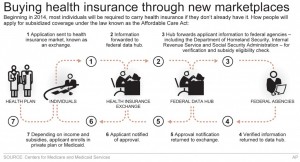 After 19 years teaching elementary school in Cherokee County, Ga., the Woodstock resident used her new master’s degree in social work to secure a job at a for-profit agency that provides outpatient mental health services to children and adolescents.

“I just loved it,” Ehlers said of her time at Focus Counseling and Training. “I loved (owner Beth Brock) and the other employees. But I couldn’t stay.” Ehlers, 44 and a single mom after her husband died in 2005 from cystic fibrosis, needed health insurance for her two boys, especially her 13-year-old who suffers from bipolar disorder and requires costly medications and therapy. Brock could not afford to offer it, so Ehlers took a job at the larger Ridgeview Institute in Smyrna, which did.

Ehlers’s story offers one small example of how the availability of health insurance can affect employers and employees in the most personal and even painful ways: Focus lost a dedicated worker it did not want to lose. The story can also serve as a microcosm of America’s larger health care crisis – the lack of affordable coverage for all – and how the grand effort to solve the problem, the Affordable Care Act, is forcing some companies and employees to make tough business decisions.

Employers far and wide have criticized the ACA. They say health coverage shouldn’t be government-mandated, and that the requirement that businesses offer it will have unintended negative consequences.

Brock said the ACA will limit her hiring and cause her to put off the big plans she had to open a second office in Savannah, her hometown.

It will, she said, “stop us from growing.” She is angry because Congress and the White House “put something into law without knowing what it was or how it would affect the big picture.” About 49 million people don’t have health insurance because they can’t afford it or don’t see it as a priority. Some haven’t been able to obtain it, even if they’ve wanted it, because they have pre-existing medical conditions. As a result, the uninsured often have to seek care in high-cost emergency rooms. Medical bills are the nation’s No. 1 cause of bankruptcy.

The ACA is supposed to result in affordable health insurance for all Americans. And large employers – those with 50 full-time workers or more – are expected to lead the way by offering coverage. If they don’t, they face a $2,000-per-worker annual fine starting in 2015, a penalty that was delayed a year to give employers more time. The uninsured also will be able to seek coverage through so-called exchanges.

Brock, whose 10-year-old firm has 40-plus staffers and was on track to pass 50, said she wants to provide coverage, but “it’s too risky.” “In staff meetings, she would bring it up and say, ‘I really wish that I could provide it, but it would put me out of business,'” Ehlers recalled.

Brock said the best deal she has been able to find would cost her business about $300 per employee per month for single coverage – with employees picking up the other half of the $600 total monthly premium.

About 14 of the employees of Focus, including Brock, would take the coverage if the company offered it, Brock said after taking a survey of her employees. That would come to more than $4,000 a month.

It may not seem like a lot, but it’s still too much.

Brock buys her own basic health coverage, as does her husband. Together, they pay $1,100 a month.

Of employees like Ehlers who’ve left, she said, “I felt bad for them. I can’t blame people wanting to get insurance.”

Many businesses will find themselves in the same place as Brock, said David Cole, an attorney who specializes in employment law for Freeman Mathis & Gary in Atlanta. “I think there is no question that (the ACA) imposes a burden on employers,” he said. The law will require employers to offer coverage to more employees, and to subsidize it so that it is deemed affordable for employees.

“This is a large expense many businesses have not had to incur under their current pricing structures, so it will likely reduce their margins or result in additional costs being passed on to consumers,” Cole said.

Some observers who support the mandate that employers offer affordable insurance to employees downplay the potentially negative impact on businesses.

The mandate affects a “relatively small percentage of employers,” said Edwin Park, vice president for health policy at the Center on Budget and Policy Priorities, a not-for-profit Washington, D.C.-based think tank. “This really doesn’t hit a lot of firms.”

According to a survey of employers by consulting firm Mercer, 98 percent with 500 or more workers already offer a health plan, 92 percent of those with 200 to 500 do, and 80 percent with 50 to 200 workers do. Of those with 10 to 50 workers, 56 percent offer coverage, but those businesses are exempt from the mandate and penalty.

David Bottoms, vice president of The Bottoms Group, an Atlanta benefits and insurance consultant and broker, said, “I do hear often from clients with around 50 employees that they plan to very carefully monitor their size to ensure that they stay below the 50-mark. For the employer who does not currently offer medical coverage, that 50th employee could be very expensive for the employer.” A self-described conservative operator, Brock said she watches her spending closely. She buys used furniture for the agency’s offices. She rents space at very reasonable rates in what amounts to a warehouse/industrial park in a plain section of Woodstock.

Frills are the $40 in snacks that she might occasionally pick up for kids waiting in the reception area.

She says she’s not getting rich, either, noting, “I don’t have a second house,” and, “I drive a used car.” “You don’t get into this for the money,” she said. “It’s a calling.” Still, there are costs, for computers, information technology services, utilities and other typical expenses beyond rent and payroll.

Focus isn’t the only business that loses out if it doesn’t grow, Brock said. She calculated that she spends about $4,700 a month on equipment, supplies and services other than rent. That money goes to other companies that, in turn, can reinvest the revenue and possibly hire more people.

If companies like Focus don’t grow, it stifles the whole cycle, she said.

Brock isn’t completely giving up on increasing her staff of therapists and para-professionals, opening the Savannah location or offering health insurance.

“I’m hoping something gives,” she said.

In the meantime, some of Focus’s current employees are still wrestling with the issue of health insurance.

Terry Kinton, a full-time therapist, is one of those who would like to take company-provided insurance if it was offered.

Kinton’s husband, who has had significant medical problems, is covered under Medicare, and her three non-adult children qualify for coverage under Georgia’s PeachCare program.

But Kinton herself goes without health insurance. The 51-year-old Canton resident hasn’t had a serious medical issue, and she’s been able to use the pay-what-you-can services offered by a Christian clinic near her home.

Still, she’s concerned about what could happen.

If something catastrophic occurred, she acknowledged, “I’d be in trouble.” Kinton said even if Focus was able to offer coverage, the roughly $300-a-month tab for her would be too much.

Kinton said she understands Brock’s position. She pointed out that Focus is generous when it comes to providing other benefits, including occasional professional training programs, a less risky expense.

“I think it’s really hard for small businesses,” Kinton said. “I don’t see how people can make it. It’s sad when you can’t grow. … Isn’t that every business person’s dream?” Still, it’s not as though Kinton hasn’t contemplated looking for a job with health insurance.

“I won’t tell you I haven’t thought about it,” she said.

What Employers Need to Know

The employer penalty applies in 2015 to employers with more than 50 full-time workers who don’t offer affordable insurance that meets minimum standards.

Employer coverage is considered affordable if the employee’s share of the annual premium for self-only coverage is no greater than 9.5 percent of his or her annual household income.

An employer may not know an employee’s household income, so the employer can avoid the penalty if the employee’s share of the premium for employee-only coverage doesn’t exceed 9.5 percent of their wages for that year as reported on the employee’s W-2 form.

For employers that don’t offer insurance, the annual penalty is $2,000 per full-time employee, excluding the first 30 employees.

An employer can face a $3,000 penalty even if it offers insurance. That can happen if the coverage would cost the employee more than 9.5 percent of his income, and if the employee opts not to buy it through the group plan but through the exchange, and then receives a credit based on income and family size.

A health plan must be designed to pay at least 60 percent of the total cost of medical services for a standard population.

What Employees Need to Know

In Georgia, employees can use the website HealthCare.gov to apply for coverage, compare plans and enroll. Individuals can apply as early as Oct. 1, 2013.

Individuals can learn about types of health coverage and research questions before open enrollment begins Oct. 1, 2013. Coverage can start as soon as Jan. 1, 2014.

If someone can afford it, but doesn’t have health insurance coverage in 2014, the person may have to pay a fee. The person must also pay for all of his or her care.