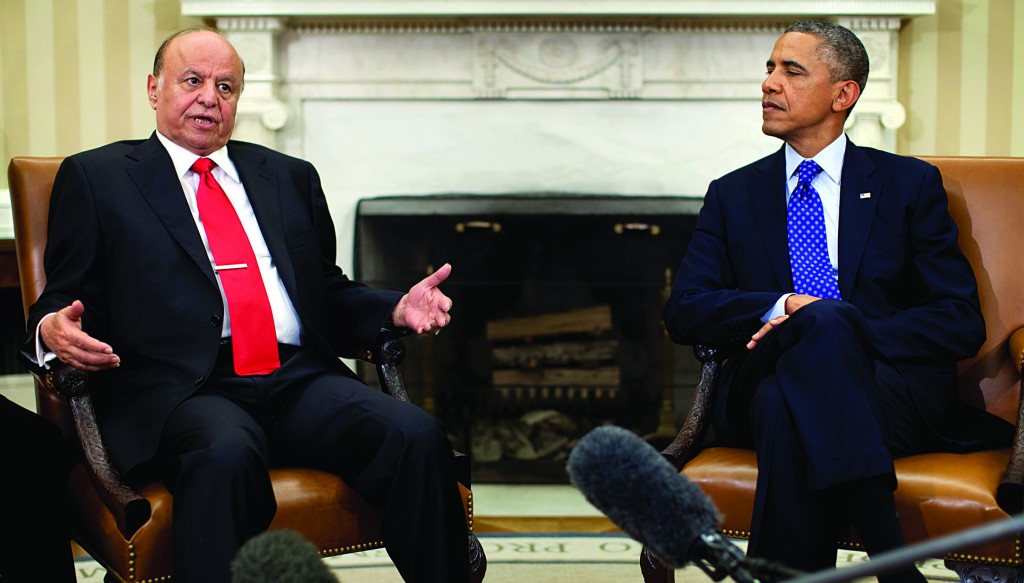 As Abd-Rabbu Mansour Hadi cements his ties with Washington, Yemen’s interim president risks alienating his own people, who resent the U.S. drone war on al-Qaeda in their country.

Hadi’s White House visit on August 1, a mark of favor from the United States, coincided with an intensification of U.S. drone attacks on suspected members of al-Qaeda in the Arabian Peninsula (AQAP), the Yemen-based group seen by the West as one of the global terrorist movement’s most aggressive branches.

The State Department also temporarily closed its embassy in Sanaa and withdrew some diplomats over warnings of a potential al-Qaeda attack, with other Western embassies following suit.

Yemen at first decried these measures as exaggerated. But it later said it had foiled an AQAP plot which also involved seizing energy facilities and a provincial capital, a claim which a government spokesman in Washington later played down.

Drones have killed at least 37 people in just over two weeks amid extra security measures that have frayed Yemeni nerves.

In Sanaa, a U.S. reconnaissance plane buzzed overhead for hours each day and security checkpoints mushroomed across the capital during the normally joyous Muslim Eid al-Fitr feast.

“Hadi has done nothing for Yemen, except to let American planes kill people whose guilt is not known,” complained Majida al-Maqtari, a Sanaa school teacher who said she had voted for Hadi in the last election but would back an opponent next time.

Hadi took office with firm U.S. support after protracted unrest forced veteran President Ali Abdullah Saleh, once also a U.S. ally, to step down in late 2011 after 33 years in power.

A southerner with a military background, Hadi was Saleh’s vice president for nearly two decades. So far he has kept the support of Saleh’s friends and foes alike and has met little serious opposition — not even from Islah, an Islamist party linked to the Muslim Brotherhood.

Hadi inherited a country in utter disarray. The anti-Saleh uprising and ensuing power struggles had brought Yemen’s tattered economy to its knees. Islamist terrorists had taken over swathes of the south. Many state institutions had collapsed.

He moved swiftly to clear an estimated 3,000 al-Qaeda and allied fighters from southern towns in a U.S.-backed offensive.

Hadi knows, as Saleh did, that pleasing the U.S. boosts the flow of military aid and humanitarian support. Washington allocated $345 million to Yemen in 2012 and is expected to give $250 million in 2013 and the same in 2014.

But many Yemenis who opposed Saleh are dismayed by the drone attacks and their country’s dependency on Washington.

“These strikes project Hadi as implementing the agenda of his predecessor, and for sure affect his popularity,” said Yahya Qasseb bin Sahl, law professor at Aden University. “They also channel the Yemeni street’s feelings in favor of al-Qaeda.”

A national reconciliation conference led by Hadi is due to conclude next month. Its aims include tackling the grievances of southern Yemeni separatists and of Shi’ite rebels in the north — two groups which Saleh fought and failed to crush.

Yet progress on a new constitution to be completed before scheduled elections in 2014 has been slow and many Yemenis are unconvinced that the dialogue will end chronic corruption or the conflicts of an impoverished nation whose 25 million people form a patchwork of tribal, sectarian and regional affiliations.

Stability in Yemen is a global concern due to its proximity to Saudi Arabia and key shipping lanes, as well as al-Qaeda’s efforts to exploit its chaotic government and rugged terrain.

Yemen also risks becoming a proxy battleground in a regional struggle between Iran, accused by Sanaa of backing Shi’ite-linked Yemeni rebels in the north, and Saudi Arabia, which is thought to support their Sunni Muslim Salafi rivals.