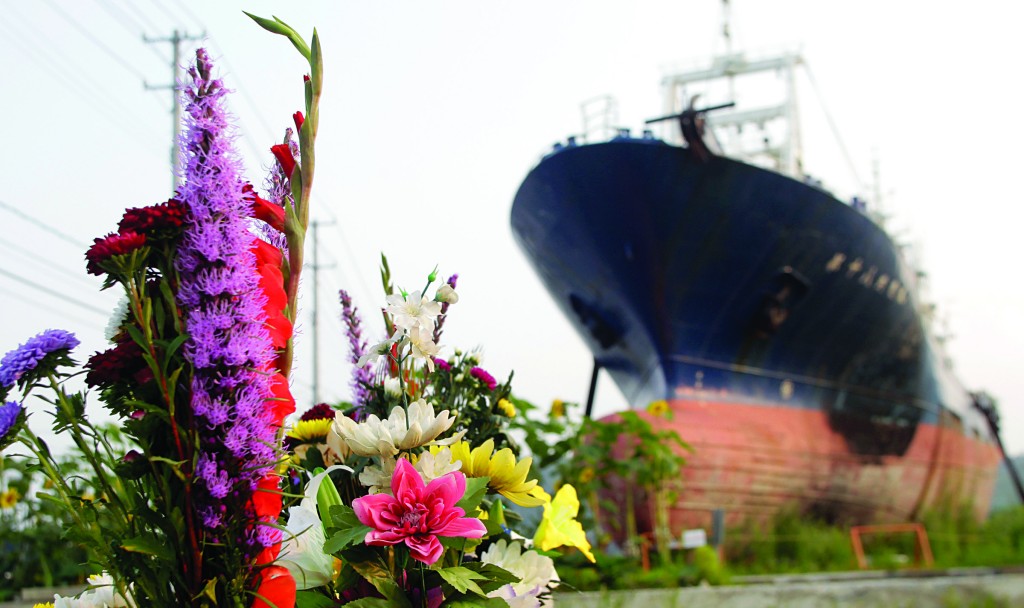 A stranded fishing boat that became a symbol of the devastation of Japan’s 2011 tsunami has long divided a northeastern coastal city — between those who wanted to keep it as a monument of survival and those who wanted a painful reminder gone.

Last week, the city announced it will be torn down after a heated debate and citywide vote. The soul-searching over the ship highlights how the aftermath of the tsunami disaster continues to torment Japan two years later.

The 330 metric ton (360 ton) Kyotokumaru was swept by the towering tsunami from the city’s dock for about 750 meters (800 yards) into a residential district.

It has become a landmark for Kesennuma, a port city of 70,000 people, and a testament to the destructive power of the tsunami set off by the magnitude-9.0 earthquake on March 11, 2011, which killed nearly 19,000 people.

The nearby smashed buildings and debris were cleared, but the 60-meter (200-foot) tuna-fishing boat has stood, majestic but oddly jarring, on dry ground for more than two years.

Opinion on the ship had been so divided it had been put to a vote by the city residents last month. Of the 14,083 responses, 68 percent, or 9,622 people, voted to have the ship destroyed. Only 16 percent voted to keep it.

Yoshimi Abe, a 72 year-old housewife and Kesennuma resident, was among those who wanted to get rid of the ship.

“It’s just a constant reminder of the terrible disaster,” she said. “When I walk by it every morning, my heart aches.”

The house that Abe grew up in was destroyed by the tsunami, and she now lives in temporary housing.

In contrast, Shigeru Saito, 80, voted to keep the boat, which he saw as a plus for drawing business.

“My son owns a store in the temporary market near Kyotokumaru. Many of his customers are out-of-town visitors who drop by to see the ship,” he said.

For now, Kyotokumaru still towers over the flattened neighborhood, its blue and red paint rusting, propped up with iron beams and fenced off with yellow tape. It’s surrounded by bouquets of flowers left by people. They pray and take photos. Some just stand and stare.

Much of the tsunami-hit region’s rebuilding remains untouched. Fears grow about people, especially young people, leaving. Some areas will be ghost-towns for decades because of the radiation from the Fukushima Dai-ichi nuclear power plant that went into multiple meltdowns.

The Fukushima fishing company, which owns the Kyotokumaru, signed a contract with a nonprofit organization that recycles ships. The dismantling is likely to start in the next few weeks.

Kesennuma Mayor Shigeru Sugawara was disappointed the landmark would soon be gone.

“I wanted to leave a visible symbol of what happened here for generations to come,” said Sugawara. “The decision has been made, and there’s nothing much more we can do.”