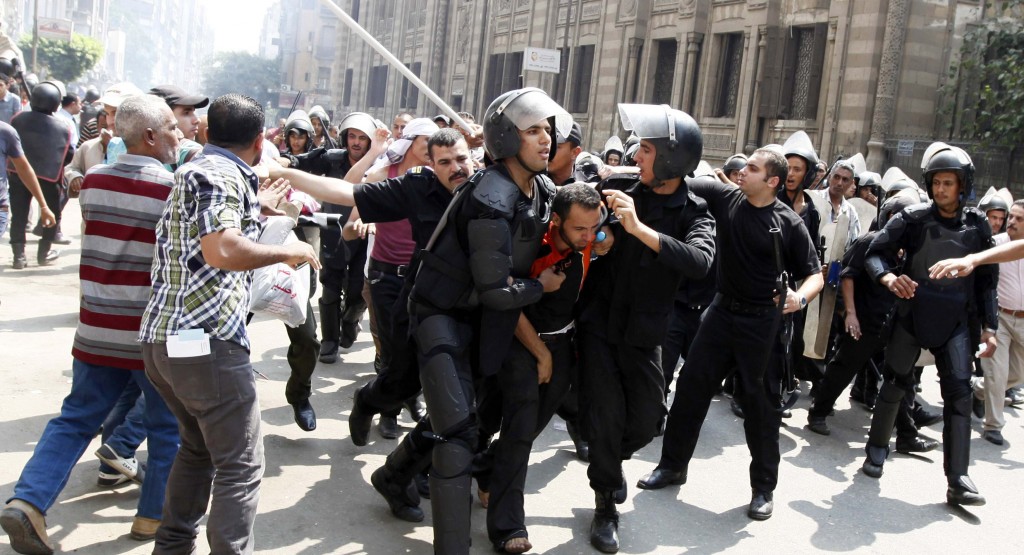 Egypt’s interim president swore in 20 new provincial governors on Tuesday, a move that reinforces the new leadership’s authority and removes all Muslim Brotherhood members previously installed in the posts by Mohammed Morsi before his ouster as president.

The shake-up came as supporters of Morsi reinforced their 6-week-old sit-ins in the capital and rallied for more protests across the country to demand his reinstatement.

The former Islamist president’s Brotherhood group is rejecting talks with the new government, much less participation in the post-Morsi transition. They say the military-backed new leadership is not serious about reconciliation or meeting a key demand of protesters to release top Brotherhood leaders charged with inciting violence.

Morsi was deposed by the military after massive demonstrations across the country on June 30. Protesters had demanded he step down for what they saw as his failure to govern inclusively and manage the economy. Many accused him of acting only on behalf of his Brotherhood group.

Morsi’s supporters have protested daily since he was deposed. The new leadership, meanwhile, has pushed ahead with a transition that has largely excluded Islamists.

Seven of the new governors appointed by interim President Adly Mansour hail from the military. In line with tradition, most of them took up posts in border governorates. But three of them were sent to other key governorates. Two took up posts in the Mediterranean cities of Port Said and Alexandria, where clashes between pro and anti-Morsi protesters have turned violent. A third was given the ancient city of Luxor, a prized tourist destination.

The changes to the administration of Egypt’s 27 provinces meant the official removal of the 10 Brotherhood governors appointed under Morsi. Many members of the group who worked in government under him had already left their positions to join the sit-ins in Cairo.

Shortly before mass protests that led to his ouster, Morsi appointed 17 new governors in a move that critics said was aimed at solidifying Islamist power. The appointments had added to the Brotherhood’s already entrenched grip on the executive and legislative branches at the time.

Morsi’s appointment of a member of the political arm of ex-Islamist terrorist group Gamaa Islamiya to be governor of Luxor had sparked particular controversy. The group, a close ally of the Brotherhood, had claimed responsibility for what became known as the Luxor massacre, when 58 tourists and four Egyptians were killed at the Temple of Hatshepsut outside Luxor in 1997.

The ex-president’s supporters have ramped up their protests in the past two days after news leaked of security plans to besiege their Cairo protest camps. Officials delayed the action to avoid bloodshed after protests swelled.

On Tuesday, police fired tear gas as hundreds of Morsi supporters rallied in front of government buildings in the heart of Cairo.