Israel Relatives of Victims Speak Out on Release of Terrorists
Israel 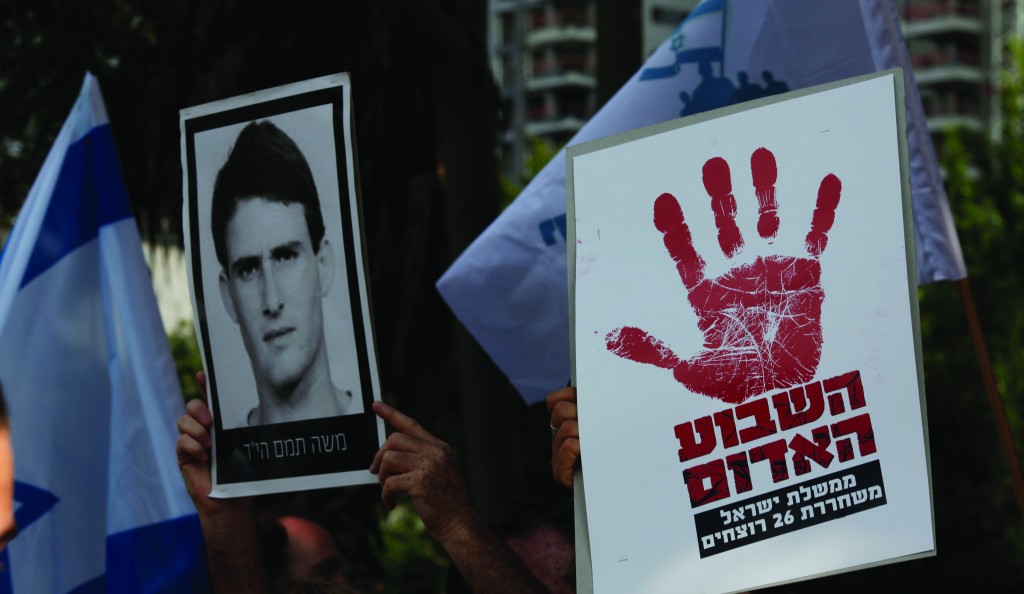 As the Israeli government announced a painful downpayment on peace talks in the form of the release Tuesday night of 26 out of 104 Palestinian terrorists, reaction ranged from furious denunciation to weary resignation to what is thought to be the necessary price to appease the Palestinians and the Americans.

A day after a panel of High Court judges cut short a hearing and walked out on the families of victims of those to be set free, they had their say in the Israeli media on Monday.

“Shame on the government and shame on the prime minister and his supporters,” Zvia Dahan, whose father, Moshe Becker, was killed while tending his orange grove in Israel in 1994. One of Becker’s three killers is to be freed.

Yaakov and Miriam Tubul, whose son Lior was stabbed to death by terrorists 23 years ago, could not accept the government’s “gesture” to the Palestinian Authority.

“How can you release a murderer who stabbed an innocent Jewish youth 17 times, in the heart of Yerushalayim? These are animals, not human beings,” cried Miriam in disbelief.

Miriam was not allowed to speak at the court hearing Sunday that discussed a motion to stop the release from taking place. Nonetheless, she called out to the judges: “These people murdered my son and his friend. Murdered by stabbing, with unbelievable cruelty. We trusted the court, that these murderers would rot in jail, and here you are, allowing their release and not even agreeing to hear us.”

“Terrorists belong in jail. Otherwise, the government is making a mockery of the legal system that ruled these vile murderers should be in prison,” Construction and Housing Minister Uri Ariel (Jewish Home) said, adding that “it’s not clear to me how releasing murderers can bring peace.”

But, pointing out that Ariel’s party is a senior member of the Netanyahu government, Shas MK Yaakov Margi accused Jewish Home of “selling out bereaved families for construction in Yehudah and Shomron.” On Sunday, almost 1,200 new housing units were approved for over the Green Line, widely understood as a quid pro quo for Jewish Home’s support.

Enthusiastic supporters of the release were scarce on Monday. Even politicians who supported the decision were clearly unhappy with it.

Yesh Atid MK Ofer Shelah said that while he found the releasing of terrorists morally repugnant, he argued that it was necessary to support Prime Minister Binyamin Netanyahu.

“When you see a prime minister begin negotiations despite opposition from members of his party and others in the coalition, you understand that we have no choice but to support him. A prime minister needs courage to start talks, and we need to follow him,”Shelah told Israel Radio.

MK Omer Bar-Lev (Labor) expressed his own mixed, perhaps confused, reaction: “In the current situation, there is no doubt that the right thing to do to ensure Israel’s future as a safe and prosperous country is to release prisoners, but it’s the worst alternative for our image, values and strategy,” Bar-Lev said.

Dozens of protesters, including bereaved families and representatives of Almagor, My Israel and Im Tirtzu organizations, rallied outside the Defense Ministry headquarters in Tel Aviv against the release, Ynet reported.

“We came to try and stop the murderers’ release. This is a black day for the bereaved families and citizens,” said Avi, a protestor, cousin of Avraham Brumberg, killed in 1981. “We pay the price of the prime minister and political echelon’s fear, a price of blood and further victims.”

Mika, Brumberg’s sister-in-law, added that “The PM evaded the responsibility. The terrorists learned and were educated in jail at our expense and now to go back to celebrate in the villages.”

“It’s painful to pay such a heavy price just as a concession for talks,” said Pini Rotenberg, after he learned that one of the killers of his father, Isaac, would be freed. The elder Rotenberg, a Nazi death camp survivor, was 69 and working as a contractor when he was killed with an axe from behind while at a construction site in 1994.

The protesters, some in tears, were carrying signs reading “Have we gone mad” and holding up pictures of loved ones who were murdered.

Nevertheless, on Monday night, the Palestinians expressed their dissatisfaction that the list did not include Israeli Arabs and east Yerushalayim residents.

PA officials also voiced disappointment over the fact that on the list were several prisoners who were expected to be released in the next few months or years.

Meanwhile, it was revealed that over the past two weeks the Palestinian Authority has been running a worldwide public relations campaign aimed at portraying the prisoners not as terrorist murderers but as “freedom fighters.”

One of the letters circulated by Palestinian representatives abroad was obtained by Haaretz. Sent out by the Palestinian Embassy in Santiago, Chile, a day after the cabinet’s decision on the prisoner release, claimed that Israel is the one terrorizing the Palestinians, and not vice-versa. “A terrorist is someone who forcefully occupies the other’s land, expels him and comes to live in his place,” the letter read, “… not the Palestinian political prisoner, the freedom fighter.”

Yet, 21 in the group of 26 were convicted of killing Israelis or suspected Palestinian collaborators, while others were involved in attempted murder or kidnapping. Most have served 20 years so far.

MK Ayelet Shaked (Jewish Home) told the protesters that a death penalty for terrorists. was necessary to ensure that terrorist murderers are “never released” as bargaining chips in negotiations.

A list of the prisoners, along with the names of the people they were convicted of killing, was published by Israel’s Prisons Service as part of a process in which opponents of their release have 48 hours to appeal to the High Court. Based on past decisions, the court is widely expected not to intervene.

The inmates are scheduled for transfer to the Palestinian Authority on Tuesday night. All will be allowed to reside in Yehudah and Shomron, after the Palestinians insisted that they would not return to the negotiating table if any of the prisoners were deported out of the country.

Peace talks are to start Wednesday in Yerushalayim.