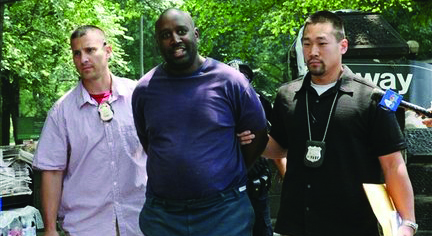 Darius McCollum can explain the complicated workings of the New York City transit system with the precision of a veteran conductor. He knows every subway stop, every line, every train.

It’s an obsession that has dominated his life. But instead of becoming a transit worker, he’s become a transit impostor. Twenty-nine times, beginning when he was a teenager, he’s been arrested for crimes that include piloting a subway train, stealing a bus and donning uniforms to pose as a conductor or track worker. Time magazine even named him on their Top 10 Imposters list.

“I’ve always loved trains, ever since I can remember. I had the whole subway map memorized by the time I was 8. People would call me to ask how to get somewhere,” said the 49-year-old McCollum, who has spent nearly a third of his life behind bars.

He’s been at Rikers Island jail since his 2010 arrest for his latest escapade — stealing a Trailways bus. He was arrested behind the wheel on the highway that leads to Kennedy International Airport.

The case, for him, is typical. But he hopes the outcome this time will be different. Attorney Sally Butler says McCollum’s actions are the result of uncontrolled impulses, a byproduct of what was until recently called Asperger’s syndrome but is now considered an autism spectrum disorder.

She says the district attorney’s office agrees, and they have worked on a solution: McCollum pleaded guilty to stealing the bus, and instead of being sentenced Thursday to 15 years as a habitual offender, he will get 2 1/2 to 5 years and voluntarily undergo cognitive behavioral therapy.

“I really do want to change,” McCollum said in a jailhouse interview. “I have motivation and people behind me — I think I can do it this time. … I knew I was different from people, but I didn’t realize what was making me different.”

McCollum grew up in Queens, near the 179th Street station on the F and E lines, and would go there after school where conductors and other train operators got to know him. He was soon cutting class to be near the tracks.

At 15, he piloted an E train from 34th Street — his favorite subway station — six stops to the World Trade Center without any passengers noticing. It started the cycle he’s been in for years. He took the civil service exam to work for the MTA but didn’t pass. It wouldn’t matter anyway, said an MTA spokesman: “We would not hire anyone who has previously stolen one of our trains.”