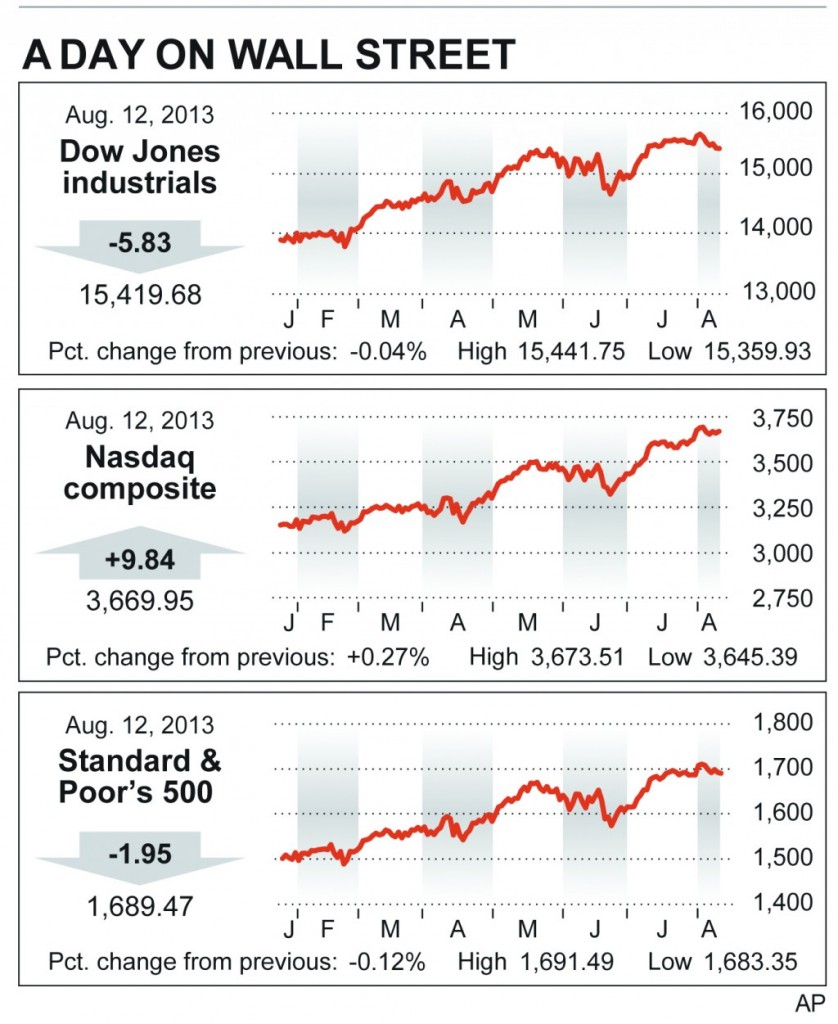 Corporate deal stories and technology stocks were bright spots on Wall Street Monday on a day when the indexes ended relatively flat.

BlackBerry jumped after the struggling smartphone maker said it would consider a sale. Dole Foods rose after its CEO said he would take the company private and Steinway Musical Instruments gained after receiving a new buyout offer.

Apple, another smartphone maker, was also in the news. The tech giant’s stock rose after AllThingsD said the company would release the latest version of its iPhone on Sept. 10. The stock’s rise helped make technology stocks the leading gainers in the Standard & Poor’s 500 index.

Still, those gains weren’t enough to push the broad-market index up for the day.

Stocks had opened lower after logging their biggest weekly loss in almost two months. By late morning, the losses had been pared, and the S&P and Dow remained marginally lower throughout the day.

Newmont Mining was the biggest gainer in the Standard & Poor’s 500 index after the prices of gold and silver advanced. Gold rose for a fourth day on reports of increased demand from China. Silver gained the most in three weeks.

Stocks have been treading water this month as companies finished reporting earnings for the second quarter and investors considered when the Federal Reserve will start to ease back on its economic stimulus. The U.S. central bank is buying $85 billion a month to keep long-term interest rates low. Many analysts expect that it will start reducing those purchases as soon as next month.

The tepid August follows big gains for stocks for July, when the S&P 500 rose 5 percent, its best month since January.

Stocks climbed last month after Fed Chairman Ben Bernanke reassured investors that the Fed would only ease back on its stimulus once the economy is strong enough to handle it. The Fed’s stimulus has been a major factor driving a bull market for stocks that has lasted more than four years.

Investors will get further clues about the strength of the economy this week when the U.S. Commerce Department publishes its July retail sales figures Tuesday. There will also be data on the housing market, industrial production and the Philadelphia Fed’s survey of manufacturing on Thursday.

The market’s reaction to the reports may be muted as many market participants are likely to be on vacation this week, said David Kelly, chief global strategist at JPMorgan Funds.

“When everybody is at the beach, it takes a louder bang to get the BlackBerries to start humming,” Kelly said.

The 2.6 percent annualized second-quarter growth rate recorded in Japan was below the 3.8 percent rate recorded in the first quarter and the 3.6 percent predicted by analysts. Japan’s main stock index, the Nikkei, fell 0.7 percent on the news.

The yield on the 10-year Treasury note rose to 2.62 percent from 2.58 percent Friday. The dollar rose against the euro and the Japanese yen.