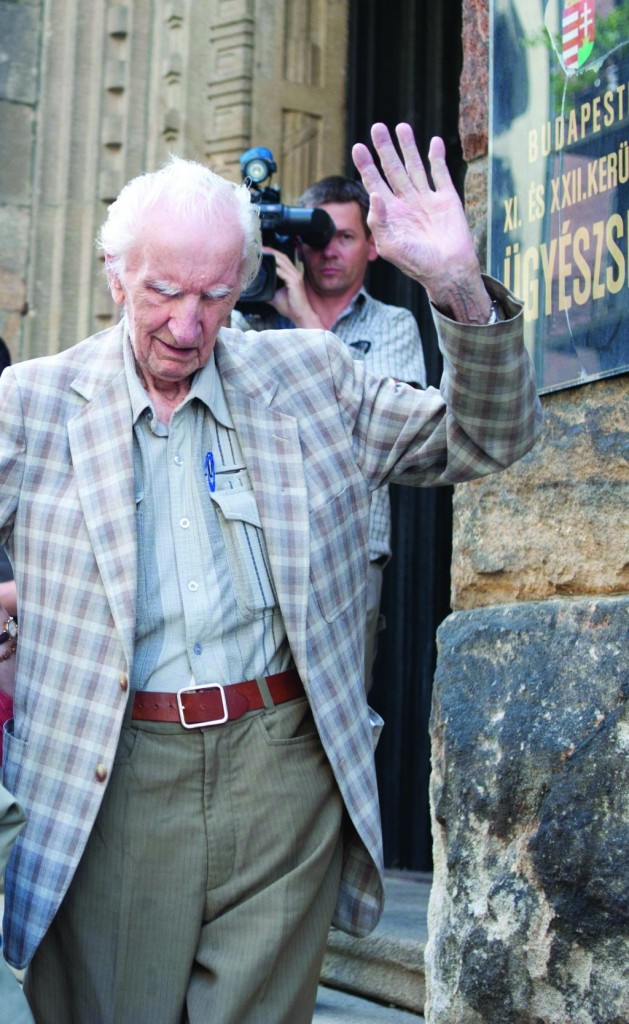 Laszlo Csatary, a former police officer indicted in June by Hungarian authorities for abusing Jews and contributing to their deportation to Nazi death camps during World War II, has died. He was 98.

Csatary died Saturday of pneumonia in a Budapest hospital, said his lawyer, Gabor Horvath B.

Hungarian authorities have said Csatary was the chief of an internment camp set up in a brick factory for around 12,000 Jews in Kosice — a Slovak city then part of Hungary — in 1944, beating them with his bare hands and a dog whip regularly and without reason. He also had been charged with “actively participating” in the deportation of thousands of Jews to Auschwitz and other Nazi death camps.

According to the indictment filed by Hungarian prosecutors, on June 2, 1944, Csatary rejected a request by one of the deportees to allow a ventilation hole to be cut into the wall of a railroad car on its way to a death camp and crammed with around 80 people.

“With his actions, the accused willfully assisted in the illegal killings and torture carried out against the Jews deported from Kosice to the concentration camps in areas occupied by the Germans,” the indictment said.

Csatary denied all those charges.

In a piercing letter obtained and translated by Hamodia in June, a Holocaust survivor describes her memories of Csatary.

For more than 50 years, Mrs. Blanche Erlich, a”h,  was convinced that the officer who tortured her and her siblings in the Kosice ghetto had been executed for his crimes at the end of the war.

When a friend, who was also originally from Kosice, wrote to her from the United States in the mid 1990s that Laszlo Csatáry had been found alive in Canada, Mrs. Erlich wrote back from her home in Israel, relating how she encountered Csatáry when her family was forced from their home into the ghetto.

“We had to put the most necessary articles on a cart and wait until Csatáry went through all the Jewish homes in our street. My father put a small table on top of the cart. When Csatáry asked him, ‘What is this?’ my father answered, ‘I will need it to study.’

“‘Do you want to furnish luxury apartments in the ghetto?’ Csatáry replied, ‘Take it out immediately, because [otherwise] I’ll throw out the whole cart.’”

Mrs. Ehrlich recounts that they spent the next few weeks in the ghetto.

“One morning, gendarmes appeared, shouted and chased us into the street, giving us hardly any time to take the most important items with us. In one apartment there were only women, and one of the girls put all the family’s things into a big backpack, also the kids’ things. She could barely fit through the gate, so one of the gendarmes hit her on the back; she fell onto the street and all of her things scattered. It was a terrible sight, and that was the last straw.

“They took us and my mother to the ghetto command, where they immediately hit us in the face with their fists and screamed, ‘Just wait, Csatáry will be here soon.’

“After a long silence he asked Csatáry what should happen to us.

“‘Give them something to retaliate for,’ Csatáry said.

“They hit us with whips, belts and sticks,” Mrs. Ehrlich continues in her letter, “so that even in Auschwitz … we were asked where we got these black and [blue marks.]”

She recounts that they were then searched, during which Csatáry’s men found the Aryan papers they had hidden in their shoes.

“Then they took us to a dark cellar where there were other people already bound hand and foot. They bound us hand and foot, too, together with my mother…  We were ‘sitting’ stooped in this way for hours; then the henchmen came in and untied the ropes, and we went up to the street with difficulty, where the [population of the] ghetto was already lined up.”

Csatary was sentenced to death in absentia in Czechoslovakia in 1948 for similar war crimes. Last month, a Budapest court suspended the case against him because of double jeopardy, as the charges filed by Hungarian prosecutors were similar to those in his 1948 conviction. Hungarian prosecutors appealed the decision and a ruling was pending.

Slovakia recently changed the 1948 conviction to life in prison — the death sentence is banned in the European Union — and was considering an extradition request for Csatary.

Csatary’s case and his whereabouts were revealed in 2012 by the Simon Wiesenthal Center.

In 1949, Csatary arrived in the Canadian province of Nova Scotia, became a Canadian citizen in 1955, and worked as an art dealer in Montreal. He left Canada in 1997, after it was discovered that he had lied about his Nazi-era past to obtain citizenship, and authorities were close to deciding his fate in a deportation hearing.

Efraim Zuroff, director of the Simon Wiesenthal Center’s Jerusalem office, said it is “deeply disappointed” in Csatary’s death ahead of his possible trial in Hungary, and said the case cast doubts on Hungary’s commitment to punishing war criminals.

Csatary was born March 4, 1915, in the central Hungarian village of Many. (With reporting by AP)