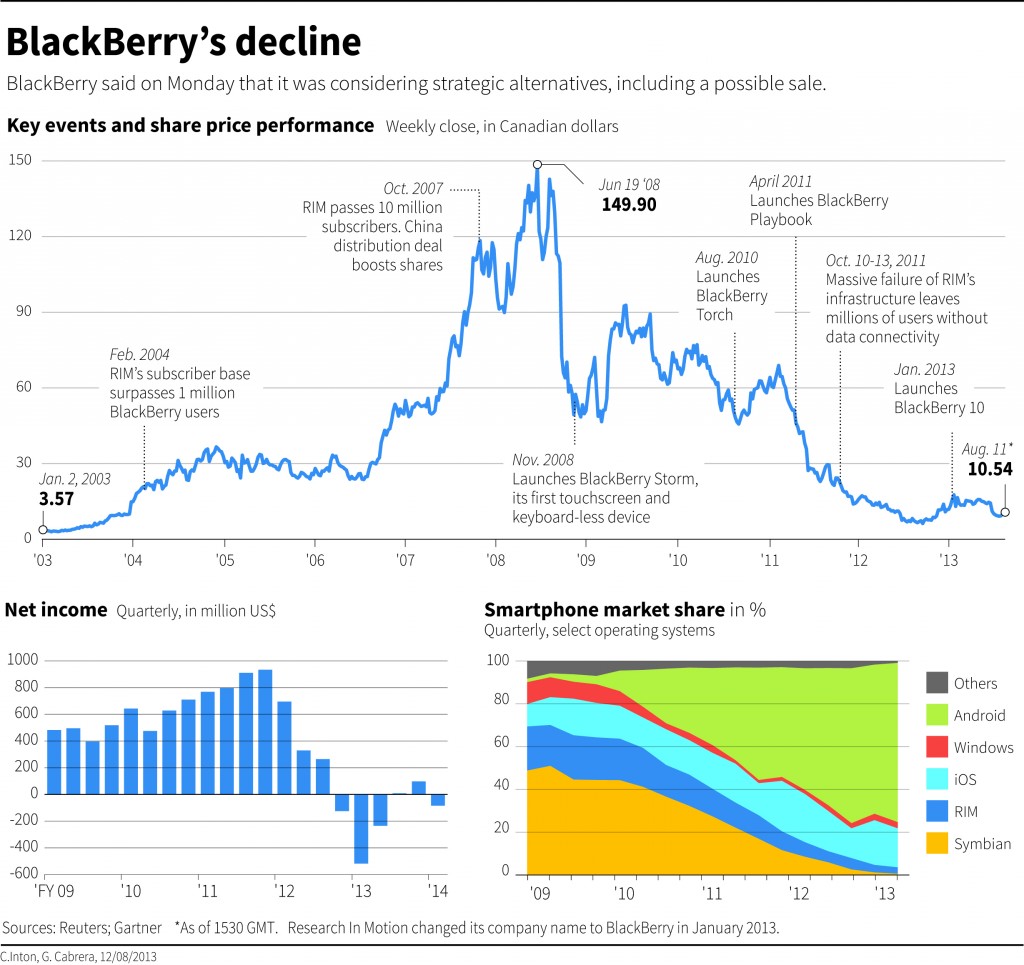 BlackBerry will consider selling itself after the long-awaited debut of its new phones failed to turn around the struggling Smartphone maker.

The company said Monday that its board has formed a special committee to explore “strategic alternatives” in hopes of enhancing the company’s value and boosting adoption of its BlackBerry 10 platform.

The company said its options could also include joint ventures, partnerships, or other moves.

The BlackBerry, pioneered in 1999, had been the dominant Smartphone for on-the-go business people and other consumers before Apple debuted the iPhone in 2007 and showed that phones can handle much more than email and phone calls. In the years since, BlackBerry Ltd. has since been hammered by competition from the iPhone as well as Android-based rivals. In January, the company unveiled new phones running a revamped operating system called BlackBerry 10 designed to better compete. But its market share continues to lag, and the company warned in June of future losses.

Mike Walkley, an analyst with Canaccord Genuity, said sales are getting worse even with price reductions for the new phones.

“Now they have to go to the next step of what’s best for the company and shareholders to survive long term because it doesn’t look promising on BlackBerry 10 sales,” Walkley said.

Monday’s announcement marks the second time BlackBerry has said it has hired bankers to help weigh its options since Thorsten Heins became CEO in early 2012. The company had faced numerous delays modernizing its operating system with the BlackBerry 10. During that time, it had to cut more than 5,000 jobs, and shareholder wealth declined by more than $70 billion.

Heins had said then he was not actively looking to sell BlackBerry, but wanted to be prepared given the challenging environment. He ended up focusing on launching BlackBerry 10 this year, but the company warned in June of future losses.

Analysts on Monday began guessing who might want to buy BlackBerry.

“If they can get it done they should absolutely do it. If [BlackBerry has] a future it would be better to do out of the public eye,” said BGC Financial analyst Colin Gillis.

Given that director Prem Watsa, the company’s largest investor with a 9.9 percent stake, is resigning from BlackBerry’s board “due to potential conflicts that may arise during the process,” some picked him as a possible bidder.

Watsa has said that he believes BlackBerry can turn itself around, but that it might take three to five years. He’s the founder of insurance company Fairfax Financial Holdings Ltd. and is one of Canada’s best-known investors. “I continue to be a strong supporter of the company, the board and management as they move forward during this process, and Fairfax Financial has no current intention of selling its shares,” Watsa said in a statement issued by BlackBerry.

Gillis said Watsa, partnered with some financial backers like pension funds, could try to buy BlackBerry. Walkley rejected that idea, saying if Watsa were interested, he would have tried to buy BlackBerry before now.

Technology companies like Apple, Google or Microsoft would not be interested because they already have their own mobile platforms, Gillis said.

Jefferies analyst Peter Misek, said South Korea’s Samsung could be interested in buying BlackBerry because Google has launched a new phone of its own from its Motorola division, the Moto X. In its quest for an independent operating system for its phones, adding BlackBerry’s capabilities would be far easier than developing a system from scratch, Misek said.

There has also been speculation that the PC maker Lenovo or telecommunications equipment maker Huawei, both based in China, were interested in BlackBerry. But Gillis also said he doesn’t see Canadian or U.S. regulators allowing BlackBerry to be owned by a Chinese company.

Major clients like the U.S. Department of Defense would abandon BlackBerry if it was bought by a Chinese company, Gillis said. “Its core reputation for security would fall apart really fast.”

The strategic review will be headed by Timothy Dattels, who joined BlackBerry’s board last year and is a senior partner at TPG Capital, one of the world’s largest private equity firms.

BlackBerry said in its release that there can be no assurance that the exploration process will result in any transaction and declined further comment unless and until its board approves a specific sale or concludes a review of strategic alternatives.