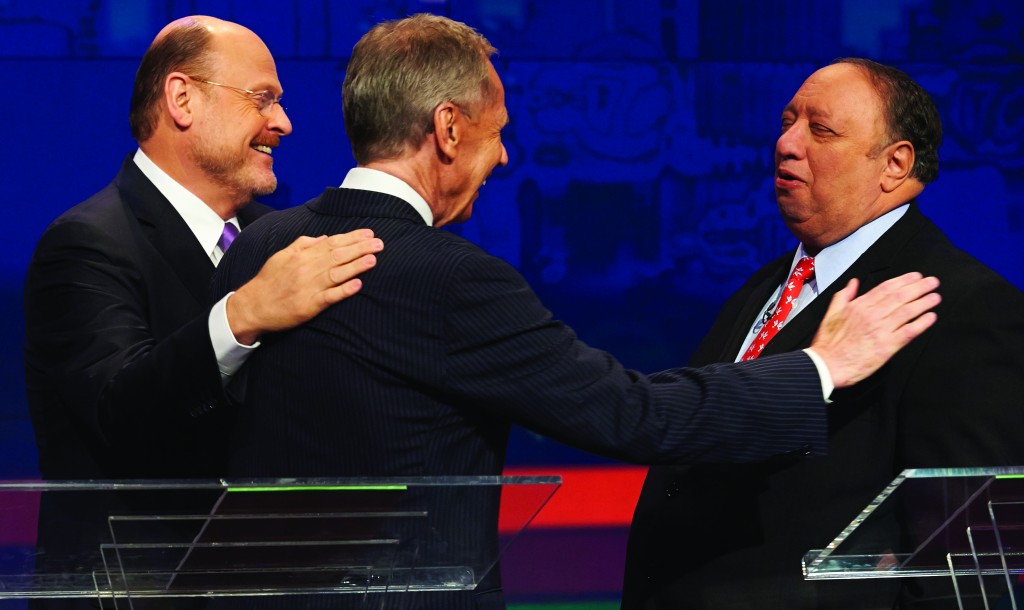 The 75-year-old Gangemi, Supreme Court Justice David Schmidt ruled, could not stay in the race because his petition’s cover sheets were “fatally defective.” Out of more than 6,000 names Gangemi submitted, Adams convinced the court that more than two-thirds were invalid. Candidates needed 2,000 signatures by the July 11 deadline.

But the judge determined he had properly collected only 1,809 names.

“We have found multiple violations of basic election law, and as a result, Mr. Gangemi was properly removed from the ballot,” said Adams’ lawyer Frank Carone. “You can’t allow someone to skirt the rules.”

Gangemi said he will file an appeal, which should take up the case within a week.

Calling the voting literature mailed out by the Board of Elections last week “ridiculous,” state Sen. Simcha Felder (D-Brooklyn) said he is worried constituents may confuse it for junk mail and throw it out.

“The mail from the Board of Elections is poorly-designed, confusing, and looks like junk-mail,” Felder said. “I suspect most prospective voters will end up tossing it in the garbage without realizing that it contains important content. It’s just ridiculous.”

The voting booklet lists new polling site and election date information. In addition to English, the booklet is written in four other languages with randomly placed graphics, including an ominous looking exclamation point inside a triangle.

Topped by his famed afro, which has caught more attention during de Blasio’s campaign rollout than the candidate himself, Dante calls his father the only candidate who will break from the Bloomberg years, end some police tactics opposed by progressives and tax the wealthy to pay for his education policies.

Republican John Catsimatidis got the first union endorsement of his mayoral bid Thursday, with the Sergeants Benevolent Association citing the billionaire’s defense of the NYPD’s stop-and-frisk tactic as basis for their supporting him over primary rival Joe Lhota.

Ed Mullins, president of the SBA, which represents approximately 13,000 active and retired NYPD sergeants, called Catsimatidis “a true friend of the men and women of the NYPD.”

The latest monetary numbers of the candidates were released by the city’s campaign finance board Saturday, showing Christine Quinn and Anthony Weiner with the most cash on hand, ready for the final advertising blitz expected to begin next week.

Joseph Lhota has $1,712,612 in his account, although his billionaire opponent, John Catsimatidis, has promised to self-spend whatever it takes to win. So far, Catsimatidis has only outspent Lhota by $1.4 million.

Erick Salgado, a conservative Hispanic pastor running on the Democratic line, has $2,490 at hand, with debts of $51,545.

Eliot Spitzer’s self-financed campaign for city comptroller has spent $2.5 million since July 12. He donated about $3.7 million of his own money, spending a little more than $2 million on advertisements alone.

His opponent, Manhattan Borough President Scott Stringer, spent about $850,000 in the same period and raised nearly $3.2 million. With public matching funds, he has about $4.6 million of cash on hand.

Eliot Spitzer and Democratic rival Scott Stringer traded darts Friday in their first debate in the city comptroller campaign, with Spitzer saying his opponent had accomplished little in 20 years in politics while Stringer maintained that the ex-governor was not suited for office.

“You passed laws that you wouldn’t hold yourself accountable to, and then you come here today and say, ‘That’s okay because I’m powerful,’” Stringer accused Spitzer.

“I made mistakes, but I’ve made a difference,” Spitzer shot back, championing the no-holds-barred stance on investigating big financial firms that earned him the moniker “sheriff of Wall Street” as attorney general, before he became governor. “What indelible mark have you left on policy?”