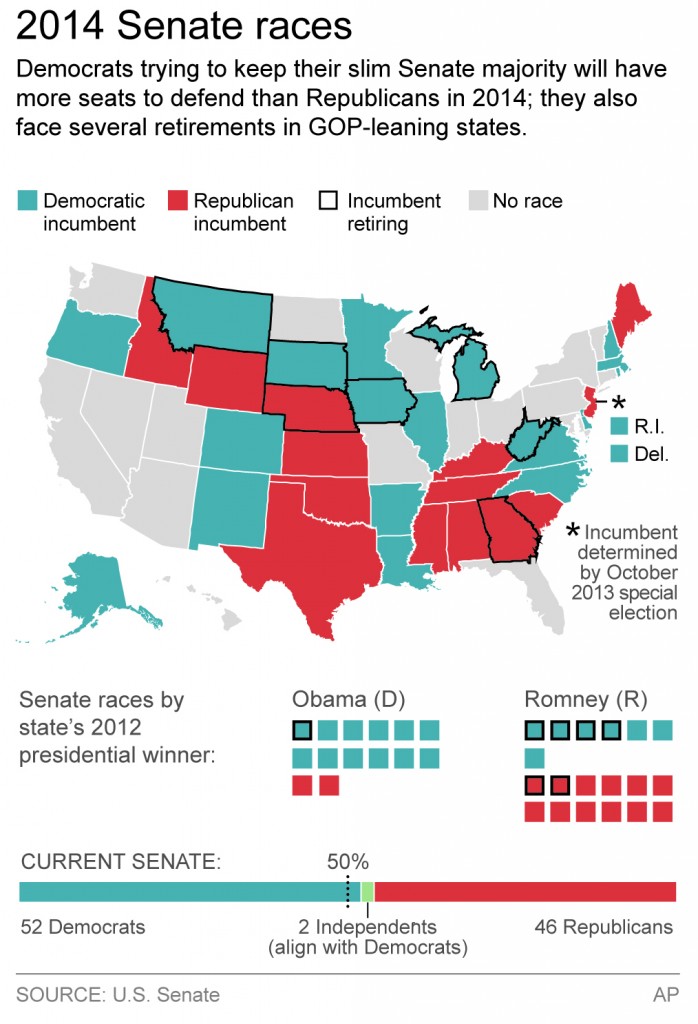 Republicans are counting on some Southern comfort to win Senate control next year.

The fate of Democratic incumbents in GOP-trending Arkansas, Louisiana and North Carolina, the ability of the 71-year-old GOP leader to hold his Kentucky seat, and the eventual outcome of a Georgia primary will help decide whether Republicans gain the six seats necessary to grab power in the Senate for the final two years of Barack Obama’s presidency.

Fifteen months before Election Day, the GOP has a genuine shot at the majority, especially with the midterm elections’ traditional low turnout and possible Obama fatigue on the party’s side. But both Republicans and Democrats stop short of writing off several Democratic incumbents who would have to lose for the GOP to regain power, and some Republicans worry about holding GOP seats in Kentucky and Georgia.

The transformation of the South from solidly Democratic to nearly all Republican in the half-century since the 1964 Civil Rights Act has made the states generally inhospitable to Democratic politicians. And next year’s elections will test whether the last remaining Southern Democrats can survive.

Overall numbers and geography favor the GOP; 21 Democratic seats are on state ballots compared with 14 Republican. Seven of the Democratic seats are in states that Obama lost in 2012 to Republican Mitt Romney, some by 15 points or more. Adding to the GOP bullishness are Democratic retirements in three of the seven states — West Virginia, Montana and South Dakota — and a few recruiting disappointments.

“There’s a lot of hard work to be done, but we feel very comfortable about the progression of the 2014 map in our favor and the quality of Republican candidates expressing an interest in running in key states,” said Sen. Jerry Moran (R-Kan.), chairman of the National Republican Senatorial Committee.

Still, Republicans had a similar edge in 2010 and 2012, and failed to take control because of flawed candidates and ill-conceived remarks. The GOP list of lost opportunities is long — Delaware, Colorado, and Nevada in 2010, Missouri, Indiana, North Dakota and Montana in 2012.

“All of those prognostications were wrong,” Guy Cecil, executive director of the Democratic Senatorial Campaign Committee, said. “One of the things that we demonstrated in the last election is that Senate races are about the two people who are on the ballot.”

Next year’s Senate contests stand as perhaps the best chance for the GOP, especially since Republicans will have to defend 24 Senate seats to the Democrats’ 10 in the presidential election year of 2016.

Currently, Democrats hold a 54-46 edge. Newark Mayor Cory Booker is expected to win next week’s Democratic primary in New Jersey and the Oct. 16 special election, boosting the Democratic margin to 10.