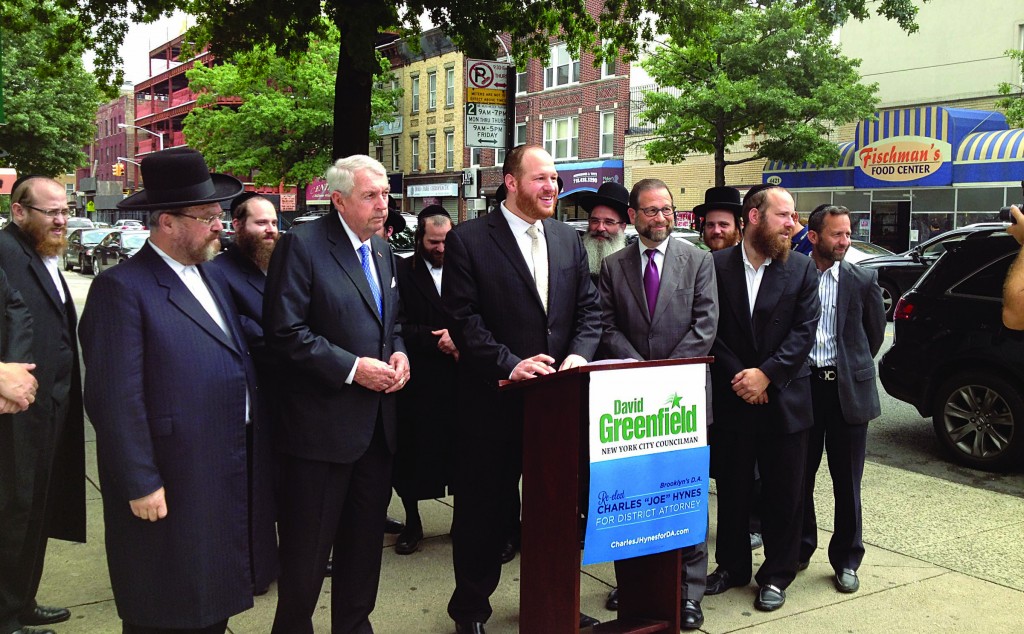 Standing on a Boro Park street corner with Hynes at his side, Greenfield pointed out the dramatic decrease in crime Brooklyn has experienced since Hynes was first elected in 1989, and credited the DA’s office under Hynes’s leadership for much of that improvement.

“It is not a coincidence that New York City is the safest large city in America, and Brooklyn has the crime rate of a small town in middle America” said Greenfield, whose 44th Council District is comprised of the heavily Orthodox neighorhoods of Bensonhurst, Boro Park, and Midwood. “It’s the hard work that’s been led for the last twenty years by District Attorney Joe Hynes.”

In accepting the endorsement, Hynes, who is running for a seventh term as DA, said that when he was initially elected, he quickly learned that the only way to bring down Brooklyn’s soaring crime rates would be to work hand in hand with local communities, something he claims his office has done by developing close relationships with each community in the district, including the Orthodox.

“Boro Park is just emblematic of the relationship we have with communities across the county,” Hynes explained to Hamodia. “I’ve worked very hard to collaborate with communities to help us identify problems and then provide solutions, but I nonetheless have a fondness for Boro Park.”

The race for Brooklyn DA has heated up in recent weeks after the late-July withdrawal of candidate Abe George, who subsequently threw his support behind Hynes’ opponent, attorney Ken Thompson.

An additional twist to the
race came when outspoken Assemblyman Dov Hikind endorsed Thompson as well, calling him “the best choice for the Jewish community.”

For all of Thompson’s
recent maneuvering, Greenfield remained confident that Orthodox Jewish voters would ultimately choose Hynes, pointing to the representatives of various Jewish nonprofit organizations and Chassidic groups standing behind him as proof that Hynes is the candidate of choice for the Jewish community.

“The only power I have as an elected official is to bring people together,” said Greenfield, “and standing behind me we have the leadership of the Orthodox community. We have folks from Bobov, Satmar, Munkatch [and] Skver. We have nonprofits … including Yad Efraim, Chessed Shel Emes; [we have] the chairman of the community board [Yidel Perlstein]. We are united today … to support Joe Hynes’ re-election.”

Greenfield also compared Jewish community support for Hynes with what he called Thompson’s lack of support. “When the other guy [Thompson] came to our neighborhood, nobody would stand with him, and it’s a stark contrast” with yesterday’s scene.

“Joe Hynes is doing an outstanding job,” he said. “He deserves to have the support of this community. He will be re-elected, and … he will win the Orthodox Jewish vote.”